Cruz: “I tell you Hillary Clinton I think is manifestly unfit to be president” 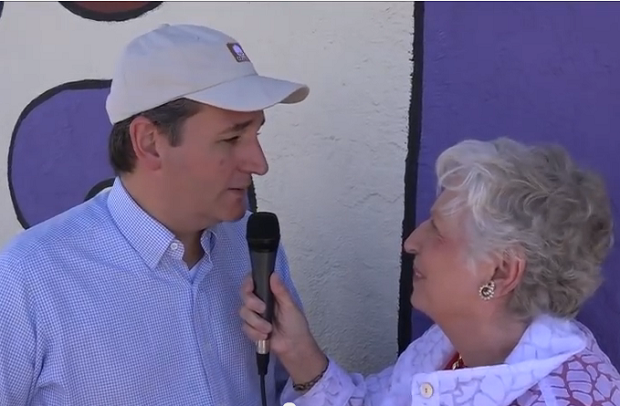 Amidst the multitudes of reports on the scores of Republicans abandoning Trump, there doesn’t seem to be much coverage of those who have decided to stick with Trump.  Ben Carson, of course, is also still supporting Trump, and  Mike Pence has been quite strong in support of his running mate.  Quite a few other prominent Republicans are also not jumping off the Trump train.

Ted Cruz has stated that he is sticking with his recent decision to support Trump and that he’s doing so for the same reasons he made the decision in the first place. Politico reports:

The Texas senator told a local TV station in Muleshoe, Texas, on Monday that despite lewd video showing Trump joking of unwanted sexual advances on women he would still back Trump over Hillary Clinton.

“I am supporting the Republican nominee because I think Hillary Clinton is an absolute disaster. Now my differences with Donald, I have articulated at great length during the campaign. And I tried all my might,” Cruz told Maggan Rennels of Channel 6. “It was an amazing journey.”

. . . .  Cruz’s reasoning was the same on Monday as it was two weeks ago: That the election is a binary choice between Trump and Hilary Clinton, and he deems Clinton far worse.

“This is an election unlike any other, but I tell you Hillary Clinton I think is manifestly unfit to be president. The policies she’s advancing are the continuation of eight years of Barack Obama,” Cruz said after giving a brief review of Leal’s Mexican Restaurant and posing for pictures with employees. “We need to have a president, we need to have leaders in Washington that will fight to defend our jobs, to get government off our back and to defend the Constitution and Bill of Rights to keep us safe.”

Marco Rubio has said that he, too, is sticking with Trump.

Rubio claims that he is standing by Trump because he dislikes Hillary Clinton more than he disapproves of the multi-millionaire’s controversial remarks made during a 2005 off-camera recording.

Rubio went on to say he was selecting from the only options that are available to the country.

“I wish we had better choices for president,” Rubio said. “But I do not want Hillary Clinton to be our next president. And therefore my position has not changed.”

Local congressional representative Kevin McCarthy has issued a statement regarding his support for Donald Trump.

In it, McCarthy reaffirms his loyalty to the Republican nominee, citing his disagreement with Democrat Hillary Clinton’s policies.

Read the full statement below.

“My support for Trump over Clinton is unchanged – ?the decisions before our next President and Congress will reshape the opportunities current and future generations have.? Hillary has made clear that she will appoint Supreme Court Justices that reinterpret our constitutional rights and expand on Obamacare’s failures. She has made clear she is willing to reaffirm the same administrative state of higher taxes, fewer good paying jobs, and no water for California – all things I have been fighting against while in Congress.? I will support every candidate on the ballot this November that will fight for the common goals that House Republicans have championed as our Better Way agenda.” – Congressman Kevin McCarthy

U.S. Sen. Joni Ernst, the first Iowa woman elected to Congress, said Monday she will vote for Donald Trump as long as he is the Republican Party’s nominee for president.

Chris Christie, after days of silence, reaffirms his long-time support for Trump.

After several days of silence, Gov. Chris Christie on Tuesday called Donald Trump’s boasts about groping women “indefensible,” but said he will not pull his support from the Republican presidential nominee.

“On the video itself, let’s be really clear, it is completely indefensible. And I won’t defend it and haven’t defended it. That kind of talk and conversation, even in private, is just unacceptable,” Christie said while guest hosting the morning sports talk radio show Boomer & Carton.

. . . .  “I made that very clear to Donald on Friday when that first came out and urged him to be contrite and apologetic because that’s what he needs to be,” Christie said. “For me this is just stuff that you can’t, can’t be involved in and shouldn’t even be thinking.”

Christie indicated he was not satisfied with Trump’s apology. . . . “I would have done it much differently,” Christie said. “But I do think he’s sorry and I do think he’s embarrassed by it.”

Still, Christie acknowledged that the Trump tape did make him rethink his support.

“Well you certainly have to think about it,” he said. “I’ve known him for a long time and I’m really upset by what I’ve heard, but in the end this election is about bigger issues than that.”

Added update:  Nebraska Senator Deb Fischer walks back her comments about Trump stepping aside for Pence and says that she’ll vote for the Trump/Pence ticket.

Fischer, who on Saturday suggested Republican nominee Donald Trump should “step aside and allow Mike Pence” to become the GOP’s candidate, made it clear Tuesday that she is actually still supporting Trump.

“I plan to vote for Mr. Trump and Mr. Pence on November 8,” she told local Lincoln, Neb., radio station KLIN. “I put out a statement … with regard to Mr. Trump’s comments. I felt they were disgusting. I felt they were unacceptable and I never said I was not voting for our Republican ticket.”

. . . .  Fischer continued, saying “to me it’s not a tough choice” to continue to backing Trump as the nominee. She said once Trump made his decision not to step aside—he said Saturday there was “zero chance” he would quit”—she was no longer calling for him to drop out.

“He decided he would not step aside. I respect his decision,” Fischer said. “I support the Republican ticket and it’s a Trump-Pence ticket.”

I live in Florida and Rubio is going win. The feeling here is that Trump voters are motivated and the rest of the voters are not too excited about Hacking Hillary and more than likely Trump wins as well. The biggest tip off is that NPA absentee ballots returned are higher than usual. Rubio knows it and so do the other campaigns.

It sure would be nice if the Republicans would spend a little less time publicly bitch-slapping each other and redirect all that venom in Hillary’s direction.

Funny how the idea of bitch-slapping did not pop into anyone’s head until about a year ago, considering it is so so entertaining.

Bottom line: the GOP is a dead party.

Win or lose, Trump will remain a major, major player in American politics. The bums of the GOPe will have their party and their constituency of a handful of rich people, but they will become the Whig party of the 20th century. Good riddance.

While I voted for Cruz in the primaries and would have voted for him in the general, I have doubts he’d have won.
Sure he’d have torn hateful hitlery to shreds and made her look like a dingleberry in the debates, but almost every woman I know thought he was creepy looking and not one voted for him in the primary.
The women were almost 100% Rubio lovers, because he looked handsome. And they aren’t just bimbo type women. Most are well educated in their fields but don’t spend a lot of time on politics.
Maybe they’d have come around if Cruz had won but we’ll never know.