A continuing trend of veterans and active-duty military leaning Libertarian? 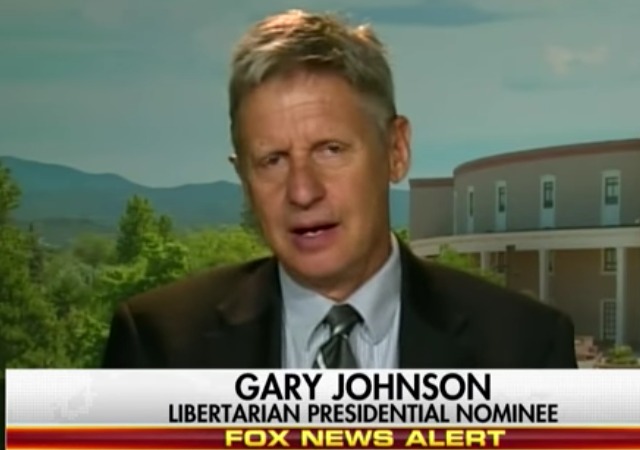 According to new polling, Libertarian candidate Gary Johnson has more support from military veterans than the other presidential candidates.  Recent polling of active military showed 37% of respondents chose Johnson, reports The Hill.

Depending upon the accuracy of the polling, it may serve as further evidence that military service members are increasingly Libertarian.

The online poll of 1,399 people, released Monday by We Are The Mighty, Doctrine Man, Military OneClick and GotYourSix, was conducted between Sept. 7 and Sept. 10 via SurveyMonkey. The poll has a margin of error of 3 percent.

Johnson has garnered strong support from the military in previous surveys — taking 39 percent among active-duty respondents in a Doctrine Man poll conducted in July, and 13 percent in a Military Times poll earlier that month.

Johnson has said he wants to balance the budget and “cut military spending by 43 percent down to 2003 levels and reduce the U.S. nuclear arsenal.”

Despite an outcry from veterans, Johnson could not participate in the Commander-in-Chief forum hosted by MSBNC and the Iraq and Afghanistan Veterans of America (IAVA). Veterans lashed out at the IAVA for not including Johnson:

“If you don’t let Johnson debate, you can’t claim to be a group that speaks for veterans in any way,” wrote one person.

“It’s shameful for a veterans group to not invite the candidate most popular with veterans,” wrote another.

Angry veterans then contacted sponsors of IAVA. The organization lost Duke Cannon Supply Co.’s sponsorship, one of its biggest sponsors, which is also well respected by veterans.

In response, the IAVA indicated they would hold a separate event for Johnson.

As Doug Bandow at Huffington Post pointed out, most people think those in the military crave and desire war. But polls over the years have shown more and more military members have crossed over to the libertarians, who are non-interventionalists. (They are NOT isolationists. There is a YUGE difference.) Bandow wrote:

While service personnel are willing to serve in combat, most do not want to do so absent compelling circumstances. And few of the interests ivolved in Washington’s conflicts can be considered serious let alone vital. A Marines Corp veteran who supported Paul told [New York Times writer Timothy] Egan that service members “realize they’re being utilized for other purposes – nation building and being world’s policeman – and it’s not what they signed up for.”

Among my facebook friends who are active duty and veteran, which includes 5 family members, 100% are voting Trump, as the anti-Monica Lewinsky’s ex-boyfriend’s wife, corrupt alcoholic enabler of her sexual predator husband candidate.

Oh, BTW, took a different route to work and finally saw a yard sign in rural CNY for Clinton-Kaine. Right next to it in the same yard- “Repeal NY’s SAFE Act!” There’s some horrible cognitive dissonance going on in that yard.

“Who is this Johnson guy? Never heard of him!”

I think most people are clueless about what Johnson actually stands for. They think because he’s running as a Libertarian that he stands for what that Party does.

Fact is, he stands for virtually everything Bernie Sanders did.

“But interestingly, of all the presidential candidates, I next side with Bernie Sanders at 73 percent,” Gary Johnson

Has no use for the Constitution either. Often talks about policies he supports which are completely at odds with it.

Big fan of Socialism too. “And look, libertarians agree with socialism as long as it’s voluntary,” he said. LOL!! How clueless can you be? Socialism is only EVER voluntary right up to the point where its leaders gain enough power to rig all future elections. You’d have to be completely ignorant of the last two centuries of world history to fail to appreciate that.

What he has in common with Libertarians is: 1) De-funded the military, to the point of rendering it incapable of anything at all, 2) Open Borders immigration, no limits whatsoever, 3) Legalizing marijuana nationwide. He even goes beyond that – says the government should dispense Heroin to junkies.