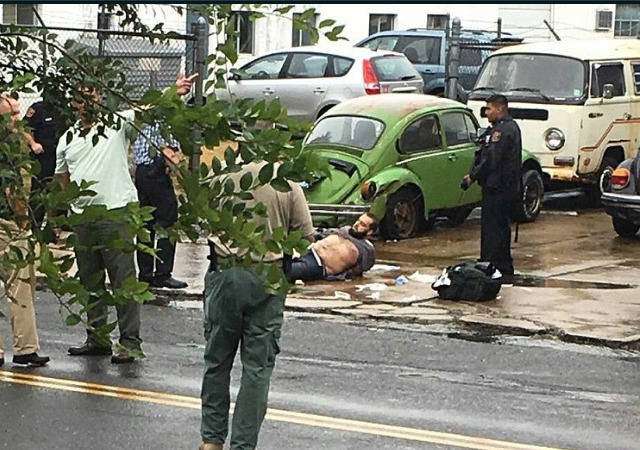 The police have captured Ahmad Khan Rahami, the suspect in the Chelsea bombing on Saturday night, after a shootout with the police in New Jersey.

The New York Daily News reported that three men recognized Rahami as he slept outside a bar. They immediately called the police:

Jack Mazza, 55, a mechanic who works at a shop around the corner, said he and a friend named Harry were walking past Harry’s bar, called Merdie’s Tavern. They spotted a male in a hoodie, initially thinking he was a bum sleeping in a sort of vestibule out front.

“Harry said, ‘That’s the guy. That’s the guy that planted the bomb,’” Mazza said. “I said ‘No, it’s not – you can’t even see his face. How do you know?’ Because he had a hoodie on. I bent down and looked at him and said, I don’t know. Call the cops if you think it’s him.”

“A few minutes later the cops showed up and the guy pulled out a gun and started shooting through the glass at them. Then he ran out and took off down Elizabeth Avenue.”

When the police arrived, they got into a shootout:

“I heard some gunfire from across the street of my store, then I saw man walking down the street with a gun in his hand. He took six shots at a police car,” said Peter Bilinskas, the owner of Bilinskas Brother Bowling Shop in Linden.

“I’m very glad that when he was shooting at the police car it didn’t go through my building. When I saw him walking with the gun, I moved away immediately.”

The dramatic episode on a rain-soaked street in Linden, N.J., came after the police issued a cellphone alert to millions of residents in the area telling them to be on the lookout for the suspect, who was described as “armed and dangerous.”

Photos from the scene showed a man believed to be Mr. Rahami laying on the sidewalk, hands cuffed behind his back and his shirt pulled up exposing his stomach and chest, with a police officer standing over him.

Witnesses said they saw police shoot at a man who was running away. One person who was too rattled to give his name said the victim appeared to have been shot more than once and was “still twitching.”

He also said it appeared a police officer was shot.

An eyewitness to Rahami’s capture in Linden, NJ told Fox News that he saw a man walking down a street with a gun in his hand. A police car pulled up next to him and the man fired at cops 4-6 times. The shooter then began running down the street with several police cars trailing him, the witness, Peter Bilinskas, said.

The authorities also wanted him in connection to explosions in New Jersey over the weekend:

“You have some similarities among the bombs and the way they were made and put together and some of the technology that was used in the bombs,” New York Gov. Andrew Cuomo (D) said on “CBS This Morning.” “So there is some suggestion that there might have been a common identity across all the bombs. But again this is preliminary.

“I suspect there might be a foreign connection. That’s what we’re hearing today as the investigation goes on.”

The explosion in Chelsea injured 29 people Saturday night. Earlier in the day, a garbage can exploded on the same route at a Marine Corps charity run in New Jersey.

Later that night, police also discovered “a backpack with multiple bombs inside” in Elizabeth, New Jersey.

We will update as authorities release more information.

From the cars in the picture it looks like he was arrested in Santo Domingo.

It seems to me that Jack Burns has some experience outside of the the good old US of A. I think all college age kids should be required to leave the States for a year before they can return. Until you have traveled overseas you will have no idea of the possibilities and future you can have here in America. Even those mired in poverty in this county have a high standard of living compared to many countries in our southern hemisphere.

Along with that- I think all newly elected congresscritters ought be required to take an orientation BUS TRIP across the United States, covering as many states as possible. I was reminded on my most recent cross country trip of some things I knew, but had pushed to the back of my mind. Like interstate exits that exit onto dirt roads. I honestly don’t think a lot of the urban congresscritters have ever seen that. This time I didn’t take any roads with signs that said “Last gas for 300 (or some other number) miles”, but I know they’re out there. Mass transit doesn’t work in areas like that. And the police, ur, sheriff isn’t 2 minutes away. And fire department? What’s that?

I have but the call out of Santo Domingo was arbitrary. Actually the burned out Bug and Bus in the background reminded me of Cuba, or Mexico. There are places in the States that are 3rd world dirt poor. With more concerted action by the Democrats, there will be a lot more.

Don’t sweat it Jack. I travel all over the world, many 3rd world countries, and my first thought when viewing that picture was Mexico, and not Mexico City either. I mean heh, one beat up bug, one beat up VW bus, and a 3rd bug fender peeking out. Come on.

obama will grant him a pardon because minorities make up way too many of the prisoners.

Could also be the guy is just an extremist conservative who never should have been in New York to begin with? Probably a hater of gay people.

“If they are extreme conservatives, they have no place in the state of New York,” Cuomo said in a radio interview Friday.