Tell that to the 29 injured. 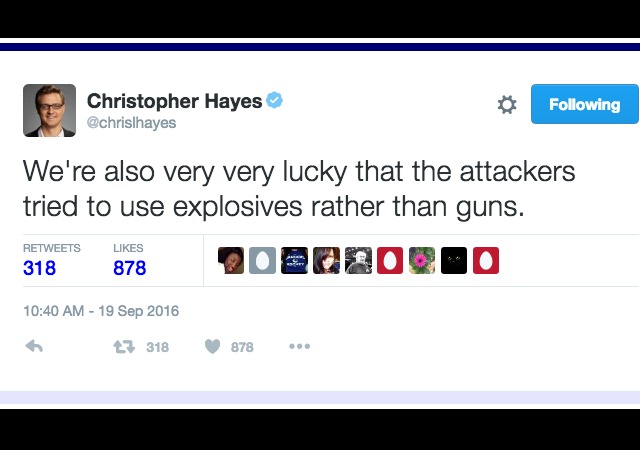 On Saturday night, a pressure bomb exploded in the Chelsea neighborhood of Manhattan, leaving 29 people injured.

Despite that pesky fact, MSNBC’s Chris Hayes is thankful it was a BOMB, not a gun.

We're also very very lucky that the attackers tried to use explosives rather than guns.

I wonder if he would say that to those injured by the bomb. Anyway, the people of Twitter had a field day.

and knives rather than a gun in Minnesota

A man stabbed nine people at a Minnesota mall over the weekend. But guess what! An OFF-DUTY COP SHOT the suspect before he could do more harm. Hhhhmmmm… interesting fact.

That picture is the Alfred P. Murrah Federal Building in Oklahoma City after Timothy McVeigh detonated a bomb there on April 19, 1995. The explosion killed 168 people and injured 680 others. The victims ranged between 3 months to 73 years old. In total, 19 children died.

The Boston Marathon bombing on April 15, 2013, killed 3 people and injured 264. The bombers also used pressure cooker bombs. These are the victims:

I know. I am sure these 3 were very lucky that a gun wasn't used in Boston as well. pic.twitter.com/vj8kCA2mn0

Pesky little fact that guns actually helped the police capture Ahmad Khan Rahami, the man behind the attack. Oh wait. Rahami had a gun on him when police surrounded him:

An eyewitness to Rahami’s capture in Linden, NJ told Fox News that he saw a man walking down a street with a gun in his hand. A police car pulled up next to him and the man fired at cops 4-6 times. The shooter then began running down the street with several police cars trailing him, the witness, Peter Bilinskas, said.

The police also linked him to a bomb that exploded in New Jersey on the same route at a Marine Corps charity run.

Later Sunday night, the police found a “backpack with multiple bombs inside” in Elizabeth, New Jersey.

And this guy will keep his job and will continue to be paid an outrageous sum of money. Sick.

Now if he insulted Mohammed, then he’d be out on the street. And probably knifed or blown up (thankfully, not shot).

Oh my yes, a good thing he used a bomb instead of a gun! Because bombs are so much less lethal than guns!

I’m sorry, but I’m beginning to think the only possible solution is for people to just start beating the stupid out of these prog morons when they say stupid shit like this.

Unfortunately, trying to beat the stupid out of people does not work, but it does make you fell a hell of a lot better doing it.

You can not fix STUPID!

And Chris Hayes has a terminal case of extreme stupidity!

While there is little question that fundamental Islam still preaches violence against “infidels” – and that could be anyone – and lots of other stuff that is hateful to modern, enlightened, liberal, tolerant, loving,compassionate, caring human beings like those of us who pay taxes so we can kill people all over the world while pretending to be purveying truth, justice, and the capitalist way of death, the reality is more complex than people seem to understand. We have 30,000 murders a year in the US. Many of them are committed by sincere Christians, but nobody highlights the religion of those perpetrators. Timothy McVeigh killed a lot of people with a bomb, but nobody suggests that he was driven by theology. Why can’t people see that humanity shares a lot of nutcases among their populations, and those nuts demonstrate their irrationality in numerous culturally-linked ways? So, yeah, psychotic Mohammedans shoot, stab, and blow people up. As do psychotic non-Muslims. There are two underlying questions which everyone seems to be avoiding: Are some cultures more likely to produce psychosis than others? That’s unclear, since psychosis itself seems well distributed around the world. And are some cultures likely to encourage a violent manifestation of individual psychosis? That, too, is less clear than one might think. For all the screaming about violent Islamic extremists, even in the middle of the violence, most people are not thrilled by the death and destruction. And in this country, with millions of Muslims, there hasn’t been that much more violence committed by Muslims than by other psychotics. The real distinction would seem to be that Islamic nutcases scream “Allahu Akhbar” when killing, while Christian nutcases and atheist nutcases scream more individualized paeans.
How about a little perspective here? If you really MUST generalize, instead of blaming Muslims for every evil, how about more accurately condemning the lyingthievingpoliticians who lie, cheat, and steal from us every day while committing heinous crimes against people all over the world in the name of “democracy”?

It’s long been apparent that being a moron is a job requirement to get on the air at MSNBC.