“A great nation does not hide its history. It faces its flaw and corrects them. This museum tells the truth.” 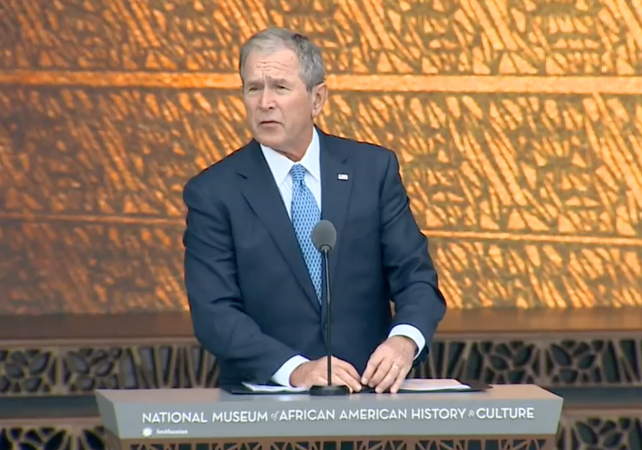 Thirteen years in the making and the National Museum of African American History and Culture is now open to visitors.

“I was honored to sign the bill authorizing construction of this national treasure and I’m pleased it now stands where it’s always belonged — on the National Mall,” said former President Bush at the opening ceremony. “A great nation does not hide its history. It faces its flaw and corrects them. This museum tells the truth that a country founded on the promise of liberty held millions in chains. That the price of our union was America’s original sin.”

W. joked about how being a struggling artist has helped him better appreciate the gifted artists, like many whose work is displayed at the museum.

His remarks, in the entirety, are here:

And the full transcript:

“Thank you all. (To Laura.) Thank you, darling. (Laughter) Laura has been very much engaged in this museum for a long time. She sits on the board. And we’re honored to be here. My first reaction is I hope all of our fellow citizens come and look at this place. It is fabulous.

Mr. President and first lady, vice president, chief justice, [Smithsonian Secretary] David [Skorton], thank you very much. The board. I do want to give a shout out to [museum director] Lonnie [Bunch]. It’s really important to understand this project would not and could not have happened without his drive, his energy and his optimism.

As Laura mentioned, 15 years ago, members from both parties – Congressman John Lewis and Sam Brownback, then-senator from Kansas – informed me that they were about to introduce legislation creating a new museum to share the stories and celebrate the achievements of African Americans. You know, it would be fair to say that the Congress and I did not always see eye to eye. If you know what I mean, Mr. President. (Laughter) But this is one issue where we strongly agreed. I was honored to sign the bill authorizing the construction of this national treasure. And I’m pleased it now stands where it has always belonged, on the National Mall.

This museum is an important addition to our country for many reasons. Here are three. First, it shows our commitment to truth. A great nation does not hide its history. It faces its flaws and corrects them. This museum tells the truth that a country founded on the promise of liberty held millions in chains. That the price of our union was America’s original sin.

From the beginning, some spoke to truth. John Adams, who called slavery an ‘evil of colossal magnitude,’ their voices were not heeded, and often not heard. But they were always known to a power greater than any on earth, one who loves his children and meant them to be free.

Second, this museum shows America’s capacity to change. For centuries, slavery and segregation seemed permanent. Permanent parts of our national life. But not to Nat Turner or Frederick Douglass; Harriet Tubman; Rosa Parks; or Martin Luther King Jr. All answered cruelty with courage and hope.

In a society governed by the people, no wrong lasts forever. After struggle and sacrifice, the American people, acting through the most democratic of means, amended the constitution that originally treated slaves as three-fifths of a person, to guarantee equal protection of the laws. After a decade of struggle, civil rights acts and voting rights act were finally enacted. Even today, the journey toward justice is still not complete. But this museum will inspire us to go farther and get there faster.

And finally, the museum showcases the talent of some of our finest Americans. The galleries celebrate not only African American equality, but African American greatness. I cannot help but note that a huge influence in my teenage years is honored here, the great Chuck Berry. (Laughter) Or my baseball idol growing up in far West Texas, the great Willie Mays. And of course, something I never really mastered, the ability to give a good speech, but Thurgood Marshall sure could. And some of you may know I’m a fledgling painter, a struggling artist. (Laughter) I have a new appreciation for the artists whose brilliant works are displayed here, people like Robert Duncanson, Henry Ossawa Tanner, Charles Henry Alston.

Our country is better and more vibrant because of their contributions and the contributions of millions of African Americans. No telling of American history is neither complete nor accurate without acknowledging them.

The lesson in this museum is that all Americans share a past and a future by staying true to our principles, righting injustice, and encouraging the empowerment of all. We will be an even greater nation for generations to come. I congratulate all those who played a role in creating this wonderful museum. May God bless us all.”

Watch the construction of the museum. Only takes a minute!

I don’t care who you are, this is adorable:

1st Lady Michelle Obama hugs Pres. George W.Bush at opening of @NMAAHC I was there for 1 of museums chief sponsors @BankofAmerica pic.twitter.com/XWw41G5nHO

W. made an ass of himself. Makes me embarrassed I ever supported him and his family.

Republicans have a very important story to tell about our leadership role in the abolition / civil rights movement and I’m glad to see that he realizes it. The last paragraph is especially inspiring. Thank you for sharing this.