What a shock. The FBI dumped about 200 pages of its interview notes from the Hillary Clinton email investigation on Friday evening. The interviews include top aide Huma Abedin, Cheryl Mills, and even the Romanian hacker Guccifer.

Somehow NO ONE, not a single soul, knew that Hillary used a private email server. A few other bombshells include President Barack Obama using a pseudonym in his emails to Hillary, the fact that Hillary did not know how to use a computer, a low key interview with Mills that does not explain why the FBI gave her immunity, and the fact that NO ONE received any training at the State Department on how to handle classified information or email guidelines. I read the 189 pages and below are the parts that stuck out to me.

In an April 5, 2016 interview with the FBI, Abedin was shown an email exchange between Clinton and Obama, but the longtime Clinton aide did not recognize the name of the sender.

“Once informed that the sender’s name is believed to be pseudonym used by the president, Abedin exclaimed: ‘How is this not classified?'” the report says. “Abedin then expressed her amazement at the president’s use of a pseudonym and asked if she could have a copy of the email.”

Lately I’ve seen people bash Donald Trump for not knowing how to use the internet. This is interesting because Abedin revealed that Hillary “could not use a computer.”

As you can tell, Abedin admitted that not everyone knew Hillary’s email address even though Hillary has insisted over and over that everyone had it. Hillary’s aides often filtered Hillary’s address, only passing on what they believed was relevant to the then secretary of state. 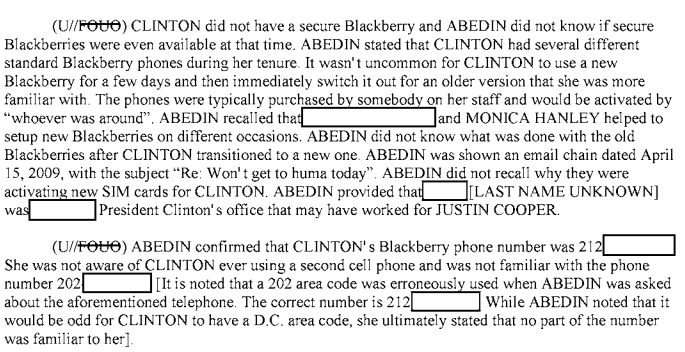 Overall, the Mills interview appears the same as the others. It’s interesting the FBI gave her immunity because nothing in her interview jumps out as immunity worthy. It doesn’t add up. I hate to sound like a conspiracy theorist, but I wonder if she told the agents something that they did not put in the notes. She did admit she had no idea Hillary used a private email server until after Hillary’s tenure ended, yet she knew of Hillary’s email address.

So he went to Mills in late 2009 or early 2010 about Hillary’s private email server, but Mills said she had no idea Hillary had the private server. Which one told the truth?

Pagliano did not implement a Transport Layer Security (TLS) on Hillary’s server, even though someone at the State Department recommended it.

Heather Samuelson, who worked as head of the White House Liaison Office at the State Department, also received immunity from the FBI. But her interview does show incompetence at the department.

So she received training at the White House, but not the State. Hillary, Abedin, and Mills also claim that no one ever gave them proper training on records and emails at the State Department. If this is true, I have no words.

Officials gave Samuelson the responsibility to sift through the emails for the investigation. Platte River Networks (PRN) gave Samuelson the emails to review. However, she only looked at the To/From fields and never read the content of the emails to determine if the email was work or personal. She printed the relevant ones to her at Mills’s office printer where Mills and lawyer David Kendall reviewed them. If they deemed them irrelevant they shredded the paper copies. Here’s an interesting part:

So despite the red flags in her head, Samuelson decided not to speak to anyone else about it. REALLY?

Hillary aide Monca Hanley did receive some proper training, which concentrated on security.

The FBI also interviewed Marcel Lehel Lazar, also known as Guccifer. He shot to fame when Fox News claimed he hacked into Hillary’s account, but admitted he hacked into Sidney Blumenthal’s AOL account. 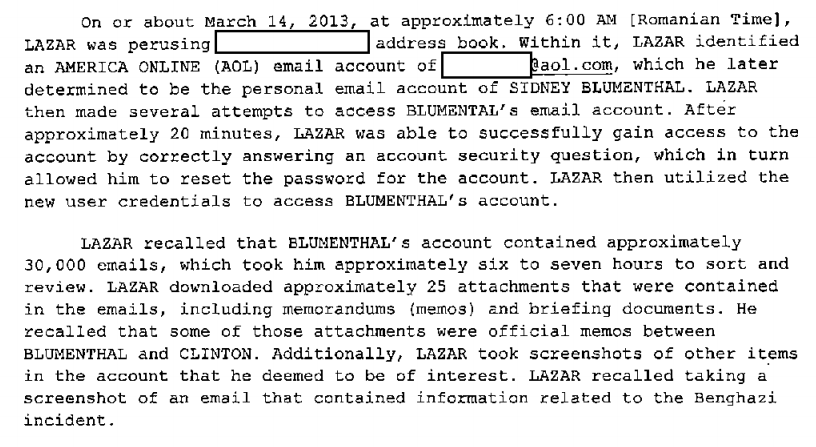 Guccifer told the FBI he never tried to hack Hillary’s account and never sent any spear-phishing emails to her address.

Another source, a name the FBI blacked out, said at first she could not directly email Hillary. She never worked at the government level before and thought this action was normal for someone in Hillary’s position. Instead, she sent her emails to Abedin to give to Hillary, who only answered once in the first six to eight months. This employee then asked for Hillary’s actual email account:

Despite this, she never actually saw Hillary’s email address, once again refuting Hillary’s claims that a lot of people knew it.

The FBI showed Michael Morell, an employee at the CIA, a few emails. He admitted that some of them contained classified information. 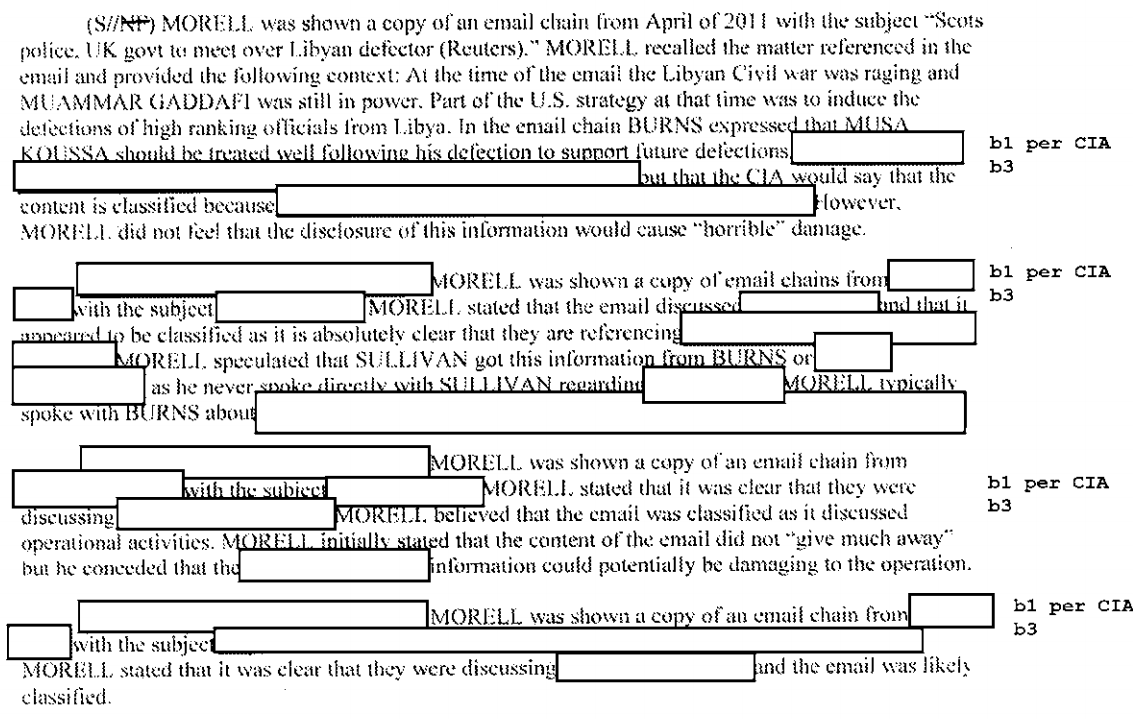 Overall, the documents have left me with more questions than answers. But of course the FBI dumps it on us on a late Friday afternoon so I can’t contact anyone in Congress or the FBI for questions.

And all that h8red for a crusader for Women’s Rights! A Crusader, I say!/s

I could have failed for an article like this, about 10 years ago.

What an icky article. The reporter was so in the tank for Hillary and completely ignored her vast history of corruption from Whitewater to the Clinton Foundation.

I did not really understand Whitewater at the time, but her entire performance during the email investigation brings to mind the tall tale about a discovery file just happening to appear on a White House table.

Something that just jumped out at me:

…noticed the imported emails displayed the address [email protected]….despite the email address not being created until after Clinton’s tenure.

This means intentional *editing* of email records under subpoena. I think. (Possibly, the Exchange server on which the mailbox resided had the box renamed, which *might* change To/From/CC entries printed out after the date of change. I’d have to check.)

Just ask on Reddit like Mr. Combetta did. He was trying to figure out how to do that exact thing.

Having scanned the data dump I was surprised when everyone said – Oh sure. We all use public email systems. But, only for non-secure emails. That means EVERYONE is doing it to circumvent the FOIA rules.

Second thing that I noticed was that Hillary was using GMAIL account when she had trouble logging on to her ClintonMail server.
Really? I bet a dollar that Google has a dedicated individual who reads Hillary’s emails. (And one for Colin Powels’ emails as well.)

Really? I bet a dollar that Google has a dedicated individual who reads Hillary’s emails. (And one for Colin Powels’ emails as well.)

If Google doesn’t, I’m sure the Russians do…

I appreciate the author’s parsing of this batch. “I hate to sound like a conspiracy theorist…”, but my god, our highest levels of government lack the sophistication of an Abbott and Costello horror film. Grandma should be consigned to use MS DOS character mode on an x86 to chat with the bulls at Leavenworth. As for koko.president.government.org, does the constitution provide for anything more severe than impeachment?