Texas compromised, but the DOJ believes the courts will reverse Wisconsin’s decision. 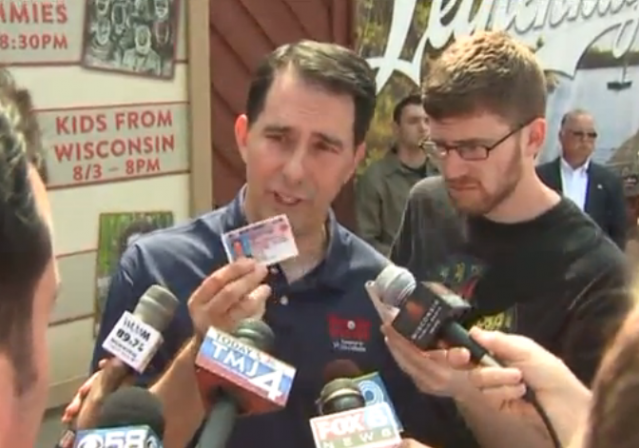 A federal judge has weakened the Texas voter ID law while the U.S. Court of Appeals suspended a ruling that eliminated parts of Wisconsin’s law.

Activists have gone after voter laws recently as the presidential election nears. They insist the poor and minority voters somehow cannot obtain an ID.

A judge scrapped the Texas law in July and forced them to go back to the table “to revamp its voter identification rules, finding that they disenfranchised minority voters.” They eventually agreed on this deal:

Under the deal, a voter whose name appears on the voting roll but who lacks the appropriate ID could cast a ballot after showing an item such as a valid voter registration card or a government document with the voter’s name and address.

The person would have to sign a declaration swearing that he or she has had a reasonable difficulty that prevented obtaining one of the accepted forms of photo identification.

Texas Attorney General will appeal the case, but explained “the state reached the deal due to the court’s time constraints.”

Now, up in Wisconsin, the Court of Appeals “suspended a July 19 ruling by a federal judge that struck down parts of” the state’s voter ID law:

The 7th Circuit Court of Appeals issued an order Wednesday staying an injunction a district court judge issued last month allowing voters without legally-approved photo identification to vote by signing an affidavit saying they faced a “reasonable impediment” to getting such an ID.

The three-judge appeals court panel said that approach was too lax, even if some accommodation was necessary for voters who could not get identification with reasonable effort.

“Instead of attempting to identify these voters, or to identify the kinds of situations in which the state’s procedures fall short, the district court issued an injunction that permits any registered voter to declare by affidavit that reasonable effort would not produce a photo ID—even if the voter has never tried to secure one, and even if by objective standards the effort needed would be reasonable (and would succeed),” the appeals court panel wrote.

The Justice Departments claims, though, “that the district court’s decision is likely to be reversed on appeal and that disruption of the state’s electoral system in the interim will cause irreparable injury.”

In March 2015, the Supreme Court refused to review the case that challenged Wisconsin’s voter ID law after activists couldn’t believe the 7th Circuit Court of Appeals upheld the law.

Every fundemental right should have the same requirement….if it takes an ID to exercise your second amendment rights, so should voting. The converse is also true. If you do not need a license for your first, you should not need one for your second. Be consistent…..

You need to register to vote. Are your guns registered?

BTW, in most places in the world, including functioning democracies, the answer is that there are valid purposes for registering both.

In Texas, to purchase a firearm from a FFL, you must present an ID (in state for a pistol, I believe from an adjacent state for a long arm), fill in a 4473 (subject to perjury), and go through a background check – subject to the delays from the approving authority – before being given the firearm (a CCL changes the process a little, but adds a ton of burden). Let’s do that to vote….just like “keeping”.

To bear an arm, expect to go to a class, submit finger prints, go through a background check – to get your “permission” to bear arms.

The Dallas Morning News details on what is necessary differ quite a bit from the original article.
According to DMN to vote ALL one has to do is sign an affidavit stating they are a US citizen and show some form of id which includes a bank statement or an utility bill.
That if true is a green light for fraud.

BTW True the Vote is a national organization of volunteers to try to stop voter fraud.

So far. True the Vote has been singularly ineffective and a pain in the butt to some unlucky citizens.

Ironic that the moral right has chosen a candidate who brags that he beats his opponents when he negotiates. I always figured that a win-win is the best outcome. If you don’t screw someone, you can do more deals.

It seems that the Right-wing recognizes that it cannot win a fair fight on any of its core issues. Winning seems to be more important that morality, truth or reality.

League of Women Voters is your idea of a non-partisan organization?

It seems to me that Obama and DOJ are actively doing their best circumvent the existing laws on several fronts.

In order to win the 2017 election the existing Administration needs voters and they just don’t care where they get them from legal or illegal. If you have an ineffective Voter ID law then any illegal immigrant can vote as many times as you want them to. Especially if they are promise citizenship and medicaid by Obama or Hillary.

We know, based on recent rulings that the supreme court votes based on what best for the party not on what best for the country. So corruption has reached into the White House, Department of Justice and the Supreme Court since the implementation of the existing deportation of 5 million illegal immigrants has been postponed until after the 2017 election.

You know of that this 5 million illegal immigrants will be just setting around and not doing any illegal voting!

There are some illegals who are criminals. But they are hardened or gang members. Voting, citizenship and Medicaid are not high on their list, although they may well commit Medicaid fraud.

Do you know of ‘any illegal immigrant who voted multiple times and received citizenship and medicaid from Obama or Hillary’?

I know a few illegal immigrants and they are scared sheetless to break any law.

Show me an eligible voter 21 to 50 years old who does not have govt photo ID!!!!

So where is the undue burden, for the vast majority of people who are legally entitled to vote? This entire thing is so much bullshit!

Maybe voter fraud is greatly exaggerated. But so is any claim that voter ID is discriminatory in any fashion.

We’ve had SCOTUS approved Voter ID in Indiana since 2005.

The left has still come up with absolutely no proof that the law has kept minorities from voting.

Why other states don’t just mirror that law, I have no idea.

“So where is the undue burden, for the vast majority of people who are legally entitled to vote?”

You illustrated the objection perfectly. Nobody is claiming that the vast majority is being disenfranchised. I am not sure why you chose 21-50 because the 14th Amendment and the Voting Rights Act of 1965 guarantee that every citizen has the right to vote – not just the vast majority.

Strange as it may seem, there are people who have given sworn testimony concerning the difficulty they encountered. http://www.huffingtonpost.com/2012/09/27/pennsylvania-voter-id-trial_n_1920993.html Yes it is the Huffpo and may emphasize the case against requiring ids, but it has more facts in it than in this article and all of the comments.