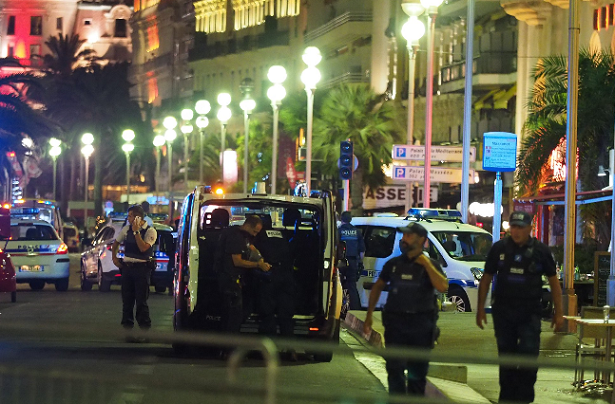 The Islamic State claimed on Saturday that the man who attacked the seaside city of Nice, France, was one of the group’s “soldiers.” France’s defense minister promptly blamed the terrorist network for inspiring the assault, while its top law enforcement official said the attacker, who was not previously known to intelligence agencies, may have “radicalized himself very quickly.”

. . . .  The Islamic State had kept silent on the Nice attack until Saturday morning, when it declared, in a bulletin issued in Arabic and in English on its Amaq News Agency channel:

Although the NYT contends that such claims should be taken with a grain of salt, France’s defense minister has no such qualms about placing the blame on ISIS.  Repeated calls for violence by ISIS via social media and various websites are being heeded, he says.

The claim must be greeted with caution. The Islamic State has in the past asserted responsibility for attacks carried out in its name, even when there was no sign of its direct involvement. For example, the group asserted responsibility after a husband and wife killed 14 people in San Bernardino, Calif., in December and after a man killed 49 people at a gay nightclub in Orlando, Fla., last month. The group has intentionally blurred the line between operations that are planned and carried out by its core fighters and those carried out by sympathizers inspired to commit violence only from a distance.

But France’s defense minister, Jean-Yves Le Drian, blamed the Islamic State for the attacks. He noted that its spokesman, Abu Muhammad al-Adnani, has called on the group’s followers to attack Westerners in retaliation for strikes by the United States-led coalition fighting the Islamic State in Iraq and Syria. France is part of that coalition.

“I remind you that Daesh’s ideologue, Abu Muhammad al-Adnani, has for several weeks repeated calls to attack directly, even individually, Frenchmen, in particular, or Americans, wherever they are, by any means necessary,” Mr. Le Drian said after a cabinet meeting at the Élysée Palace, using an Arabic name for the Islamic State. The “minds of those like the truck driver” are susceptible to such calls for violence, he said.

A short while later, the SITE Intelligence Group, which monitors jihadist communications, said the Islamic State had also put its claim of responsibility in a news bulletin on its radio station, Al Bayan, and that it “threatened that ‘crusader states’ are not safe.”

Watch the report from India News:

Further details are also emerging about the truck driver responsible for mowing down these people as they celebrated Bastille Day.  It appears that he had a long history of being “troubled” and of run-ins with the police.

Mohamed Lahouaiej Bouhlel, who killed at least 84 people by driving a truck through crowds in the French town, was not a pious, educated man in the mould of Mohamed Atta, one of the hijackers behind the 9-11 attacks in the United States in 2001.

Rather, neighbors and family describe him as a troubled man who lived apart from his wife and three children and drank alcohol, something forbidden by Islam.

That poses a big problem for authorities, who have put much of their focus on tackling hardline Islamist ideology by seeking to spread counter-arguments in schools and mosques.

Tunisia-born Bouhlel, who was shot dead by police, had several run-ins with the law, including a March 2016 conviction for hurling a wooden pallet at a driver in a road rage incident.

His sister also told Reuters he saw psychologists for several years before he left Tunisia in 2005.

Authorities are reportedly considering the possibility that Bouhel was suicidal and decided to “make his suicide look like a terrorist attack.”

Tunisian-born Mohamed Lahouaiej Bouhlel – described as a “weird loner” who “became depressed” when his wife left him – was a French passport holder who lived in the Riviera city and was regularly in trouble with the law.

Bouhlel was reportedly not on a terrorist watch list and investigators are seeking to establish his motives – and are also looking for possible accomplices.

. . . . A police source has told The Telegraph that Bouhlel might have been motivated more by a desire to commit suicide than by an Islamist ideology. The source who is close to the investigation said that the 31 year old attacker may have been “a suicide case who decided to make his suicide look like an Islamist attack. Investigators are being cautious about definitively ascribing a motive for the time being.”

That “was a soldier of the Islamic State” statement says nothing at all. It’s generic pap. Divining meaning there is about as useful as reading sheep’s entrails.

France has two problems which have little do with each other; militant Muslims overseas, and homicidal Muslims at home. There’s a connection between the two, but it’s not terribly strong and, operationally, it’s not very important.

Obviously, Hollande would prefer the problem to be treated as one of militant Muslims overseas. That he can handle, even if not very well.

The problem of homicidal Muslims at home he probably has no idea how to handle, and he won’t even try. So he’s certainly not going to talk about it, even if he knows all about it. (It’s possible he doesn’t grasp it; he is a Socialist, so we know he’s capable of believing all sorts of silly things.) In any event, he’ll talk tough about foreign Muslims, and leave it at that.

There really isn’t anything else he can do.

The French Islamic problem goes ‘way back, long before Merkel’s “refugees” became a pox on the land. The roots are in the collapse of European colonial administrations in Africa and Asia, and the attempts by Britain, France, and Belgium to hold on to them after WW2. Long story short … France made this bed, and now France, Morocco, and Algeria are sleeping in it.

How did this Muslim get grenades and firearms?

In Nice? At his local mosque.

Most of the weapons were reportedly fake, including the grenade.