Looking for equality or preference? 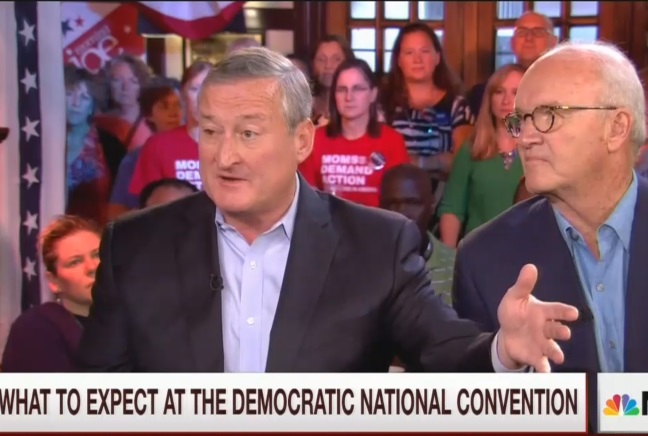 Such a shame that current Philadelphia Mayor, Democrat Jim Kenney—and Hillary Clinton for that matter—weren’t around for the drafting of the Declaration of Independence. Back in 1776, Kenney and Clinton obviously would have been much more enlightened, morally-advanced voices than Thomas Jefferson, John Adams and Benjamin Franklin . . .

On today’s Morning Joe, Kenney—who endorsed Hillary early in the primary season—was asked about the prevalence of Black Lives Matter voices and concerns to be heard at this week’s DNC. He responded with a condemnation of law enforcement, the court system and even the Declaration of Independence. Kenney declared that black lives “haven’t mattered in our country over the history of law enforcement and in the criminal courts and in the way people have been treated from the 1600s up until now. When the Declaration of Independence was signed, it was all men are equal: well, all white men with land were created equal.”

Really? “Up until now” black lives haven’t mattered in our country? Do any of the following ring a bell with Kenney: the Civil War, the civil rights legislation of the 1960s [strongly supported by Republican senators and opposed by many Democrats], Great Society, affirmative action, etc.?

Kenney went on to say that it’s been a “succession of fights to get the rights for everybody.” Of course it’s true that from the moment of its founding to the present day, our nation is not and never has been perfect. But the Declaration was a truly revolutionary document in establishing the moral principle of equality, unprecedented in the world of its time, and laying the groundwork for future progress. For a modern politician like Kenney to slander the Framers, along with today’s police and court system, is grotesque.

Note: As reader pfg has astutely pointed out, in January, a man shot a Philly policeman multiple times at point-blank range, saying he did it in the name of ISIS.  At the time, Kenney claimed the shooting had nothing to do with Islam. “It is abhorrent,” he said. “It does not represent the religion in any shape or form or any of the teachings. This is a criminal with a stolen gun who tried to kill one of our officers, and it has nothing to do with being a Muslim or following the Islamic faith.” The Philly police union recently issued a statement condemning the Clinton convention for inviting relatives of those killed by police but not relatives of police killed in the line of duty by black protesters.  Kenney’s slur of police this morning will surely add fuel to that fire.

WILLIE GEIST: Mr. Mayor, one of the themes we’ll hear a lot about tonight, we’ll hear about it this week as a matter of fact: Black Lives Matter, we’ll hear mothers of victims of police violence. How have the events in the country over the least couple of years, if they have, changed the way you talk to your police about dealing with their community?

JIM KENNEY: Well, the issue of Black Lives Matter is that they do, because they haven’t mattered in our country over the history of law enforcement and in the criminal courts and in the way people have been treated from the 1600s up until now. When the Declaration of Independence was signed, it was all men are equal: well, all white men with land were created equal.

Is it fair to say that ‘most’ blacks disagree with me? As lot as around 90% vote Democrat, the answer is yes.

Most folks forget the purpose of the Constitution’s 2/3 of a person statement. At that time, slaves were counted as zero, i.e. as property, not voting citizens. The slave states wanted to keep it that way. Most of the founders wanted to count Blacks in the census for determining how many congressmen they would get. In order to get the Constitution ratified, they compromised, counting Blacks as 2/3. This allowed the slave states and free states to have nearly equal representation in Congress and allowed for ratification. Because they recognized this should eventually change, they only made it permanent for 20 years. The bottom line is, the 2/3 of a person was to move Blacks into our society, not to diminish them. Of course, the race pimps do not want to let the Blacks and liberals know the truth, or they might flee the Democrat reservation.

“Most of the founders wanted to count Blacks in the census for determining how many congressmen they would get.”

You sort of have that reversed.

Plus, it wasn’t “blacks”, but slaves who would be counted as 2/3 human beings. Freeman in any state were counted as just folks.

Your ignorance of history is simply astounding.

Non-slave states didn’t want to count slaves at all.

The eventual compromise was called the “Three-fifths Compromise”, and not because it involved 2/3 of anything.

both of you are quite right and I appreciate you correcting my memory. The point is, however, that the founders were improving the lot for slaves (Blacks), not trying to diminish them as these Democrats are implying.