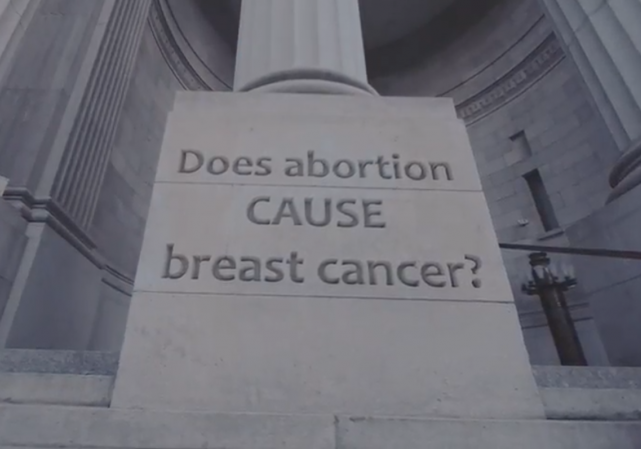 Just last week, my husband (a licensed therapist) and I were discussing the pro-life cause and how the lasting mental health ramifications are criminally underreported. He explained that of the many issues women face, there is seldom any trauma he’s encountered that rivals the aftermath of abortion.

A new documentary, “Hush”, explores what really happens to women, both physically and mentally post-abortion.

“Women who have an abortion history are at a higher risk for substance use, for anxiety, for depression…” one of the film’s participants explains. “This really has nothing to do with the morality of abortion, per se, it’s the morality of telling the truth about it.”

Less political and more science-based, the hope is to encourage conversation about the many under-discussed realities of abortion.

we believed that if we could overcome our differences and work together, the outcome would be powerful towards the breaking down of political boundaries. Together we determined to maintain one goal, and only one goal, in the making of this film: to find the truth for the sake of women’s health. To do this, we would have to maintain a posture of honour towards ALL women, forgoing our personal opinions of whether abortion is right or wrong, good or bad. We united for the greater good: to ensure that the best possible care is being given to women.

In “Pro-Life” circles, hearing about the negative effects of abortion is a common thing. Churches and Crisis Pregnancy Centres will tell you about the psychological trauma, potential for physical damage, and even breast cancer, that abortion may cause.

On the other hand, in “Pro-Choice” circles, and at abortion clinics it is commonly told that the procedure is much safer than childbirth, that the psychological effects are the same as if you deliver the child, and the breast cancer connection is a closed case.

One way or another, someone is lying to women.

Sure, there were challenges exploring one of the most polarizing subjects in western culture:

What made the investigation consistently difficult is that the only people willing to speak to the subject came from extremes of the political spectrum. Any truly neutral scientists, doctors, psychologists and researchers who had looked at the subject chose to zip their mouths, ignored our calls, or deferred to others. So we determined we would have to hear everyone out, no matter their political leanings, with an open mind, and a healthy amount of skepticism.

We aren’t scientists. And we don’t claim to be. But the research involved in the making of this film was extensive. Our investigation lasted for a year, and took us all across the globe. Shooting took place in Edmonton, Calgary, Montreal, Toronto, New York, New Jersey, North Carolina, Washington DC, Pennsylvania, Ohio, Illinois, California, Washington, Texas, London, England and Punjab, India.

What none of us knew going into the project, was how Punam’s health would be directly affected by the information found in the process.

“Hush” is available to rent or own here.

One surprising thing that I’ve discovered as I get older is that, in the middle of the night, everything that I’ve ever done wrong and every thoughtless or unkind word I’ve ever uttered in my entire life comes back to haunt me while I’m sleeping. Not that I’ve done anything really bad, but it’s still troublesome. The ancients probably attributed this phenomenon to “demons”. It seems to me that if I were a woman who had aborted a young life, that decision would eventually come back to torment me in the middle of the night.

Even if there is science behind this argument – and there has been NONE presented – we still have the “correlation does not constitute causation” issue to deal with. Perhaps people inclined to drug abuse are also inclined to premarital sex and abortion? So the abortion, far from causing the addictive behavior, in fact RESULTS from that predisposition. This so far sounds tendentious rather than research-driven.

The counter argument to that is that miscarriages are also seem to have significant psychological impacts. If you’ve known anyone who miscarried, they’re generally not a happy camper after that, and I seem to recall that it also correlates to an increase in divorce rate in the immediate aftermath.