Benghazi Widow: Hillary has no right to tell me to move on.

Benghazi Widow: Hillary has no right to tell me to move on.

“Nobody in government can tell me how I feel.” 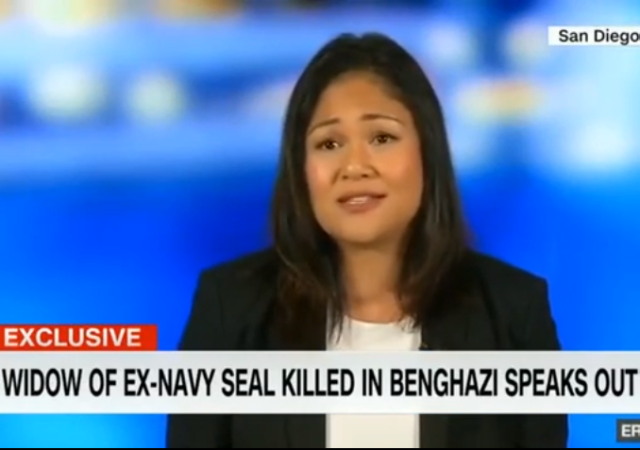 After the Benghazi Committee released findings this week, Hillary Clinton declared it was time to move on. Dorothy Woods, the widow of Tyrone Woods who died in Benghazi disagrees.

Woods appeared on CNN this week and had a few things to say.

Benghazi widow to Hillary: How dare you tell me to “move on”

It’s become standard Clintonista patter to react to scandals involving Bill and Hillary to tell critics to “move on.” In fact, a group of supporters named their Clinton-apologist organization for the clichéd riposte, and still operate to this day.

For Dorothy Woods, the widow of fallen Benghazi hero Tyrone Woods, Hillary Clinton’s use of this verbal tic was not just cliché, but a personal affront. “She has no right,” Woods told CNN’s Erin Burnett last night, “to tell me it’s time to ‘move on’.”

Woods is absolutely right when she talks about the committee. The left constantly ridicules Benghazi and its investigation as a pointless, political witch hunt. Odd behavior for people who made an anti-Bush industry out of people like Cindy Sheehan.

The Benghazi Committee has even turned some liberals into fiscal conservatives who are suddenly concerned about the cost of government.

The Weekly Standard offers this response:

Ten Things That Cost Taxpayers More than the Benghazi Investigation

On Monday, Rep. Nancy Pelosi said in a statement, “House Republicans’ Select Committee has now wasted more than two years and $7 million in taxpayer dollars retreading the same facts and conclusions exhaustively detailed in previous congressional reviews.” Despite the various revelations that the Benghazi investigation brought to light, Democrats claimed outrage that the committee, which investigated the terror attack that killed four Americans, spent a whopping $7 million over the course of its two year investigation.

Their allies in the media echoed the sentiments that $7 million represented an unimaginably lavish sum. Here are 10 examples of government waste that cost as much— or far more—than the Benghazi Committee:

My take away … Cowards “move on,” heroes move in.