The Babies Who Survived the Holocaust

The Babies Who Survived the Holocaust

“When the Americans who liberated Dachau found the women with their babies, they cried.” 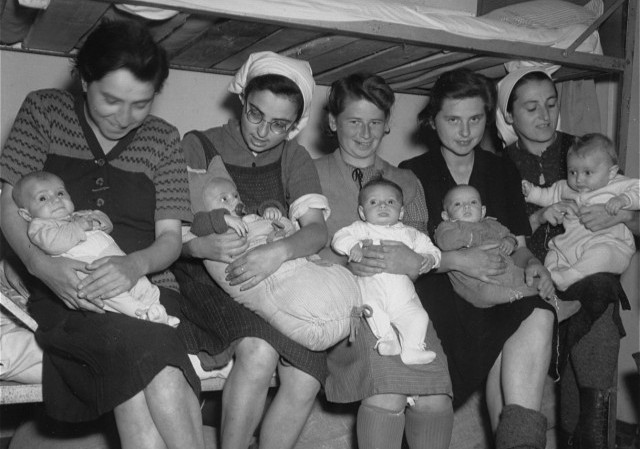 Through the course of my daily interneting, I happened across a post that discussed the babies born in Dachau. Naturally, I had to check this out further.

Their stories are amazing and too good not to share.

First, the story of the babies pictured in the featured image:

In this image is 5 of 7 women (shortly after their liberation in Dachau) who were pregnant and had given birth, all during the Holocaust. Each woman is a miracle. Miriam Rosenthal (not pictured) survived Auschwitz before her arrival. Eva Fleischmanova (middle) survived two inspections by Josef Mengele.

One by one, they were brought to Dachau and, for some reason (perhaps in the hope of being used as barter with the now-winning Allies) put together into a basement. Thanks to the help of their fellow inmates, and their helping each other, they managed to survive until their release. Throughout the experience, one baby after another was born, brought into the world by an inmate who was trained as gynecologist, and whose only tool was a bucket of hot water.

When the Americans who liberated Dachau found the women with their babies, they cried. Surrounded by a death the soldiers could hardly imagine, they had found a spark of unimaginable hope.

The BBC created a short documentary about Eva Clarke and Anka Bergman, two of the babies that survived the Nazi death camps. This is the first part:

On the 65th anniversary of the liberation of Dachau, Rory McClean, blogged about the Dachau museum’s exhibit that highlighted the miraculous surviving pregnancies.

Earlier this week Dr. Sabine Schalm, co-curator of the exhibition, told me, ‘What is for me extremely moving about this story is, that in a place where hundreds of prisoners died every month, there was this wonder of seven new-born babies who survived not only the camp but are still alive today. In a way — excuse me for being a bit pathetic — they are a little triumph over the Nazi system.’

While pregnancies were not uncommon in the camps, women and their children were usually murdered. The exhibition traces the story of these seven survivors: their lives before deportation, their arrival and imprisonment in the terror camps, their experiences as female prisoners, the discovery of the pregnancies and birth of the children, the reaction of the SS, and finally forced evacuation, liberation and their lives following the Holocaust.

After giving birth, the mothers Eva Fleischmannovà, Sara Grün, Ibolya Kovács, Elisabeth Legmann, Dora Löwy, Magda Schwartz and Miriam Rosenthal – who now lives in Toronto — formed a so-called Schwangerenkommando (pregnant unit). They were forced to work in the prisoners’ laundry. As late as 13 March 1945, the head SS camp physician issued an order for the mothers to be transferred from Dachau to the Bergen-Belsen death camp. Thankfully the order was not carried out.

Sabine Schalm’s co-curator is Eva Gruberová whose new film ‘Geboren im KZ’ (Born in a Concentration Camp) is produced with Martina Gawaz and broadcast this week.

‘Last summer Eva and I decided that we would like to work together to curate an exhibition to bring this story to the public,’ said Sabine Schalm, who trained as an historian in Regensburg, Berlin and Edinburgh. ‘Dr. Gabriele Hammermann, director of the Dachau Concentration Camp Memorial Site, liked our idea and agreed to support the exhibition.’

The Memorial Site was established in 1965 on the initiative of surviving prisoners who had formed the Comité International de Dachau. The Bavarian state government provided financial support. Every year 700,000 visitors come from around the world to the site.

Schalm went on, ‘This terrible history is part of my professional life and it is very often hard to bear. But it is exactly these kind of stories and meetings with survivors that are so very fulfilling and encouraging. The opportunity for me to meet these six “children” at the exhibition is a miracle — and it is for me personally a very strong motivation for my work.’

Even in the midst of unthinkable evil, there survived life and hope.

Four years ago I took a tour of Dachau while spending a week in Germany. Standing in the courtyard area between the administration building and the barracks where they held daily head counts, I felt so many emotions all at once. It’s difficult to explain and something that one cannot fully understand until they’ve been there. I felt similarly standing atop the grandstands in Nuremberg where Hitler made riveting speeches. Any time a story of life or hope or happiness comes out of those unfathomable tragedies, it is amazing to hear about. Thank you for sharing this one.

Timberwolfstraat, not Timberwolfstrasse.
The Netherlands American Cemetery is the only one in the system which is fully subscribed. That means there’s a local family looking after every one of the 8301 graves there.

Each camp, labor or concentration or death camp, had satellite camps with names we have rarely heard.

If the Jew hating islamists ever get ahold of a nuclear device or dirty bomb there will be even more deaths.