Support for Israel high overall, but not among the youngest progressive Bernie Sanders supporters. 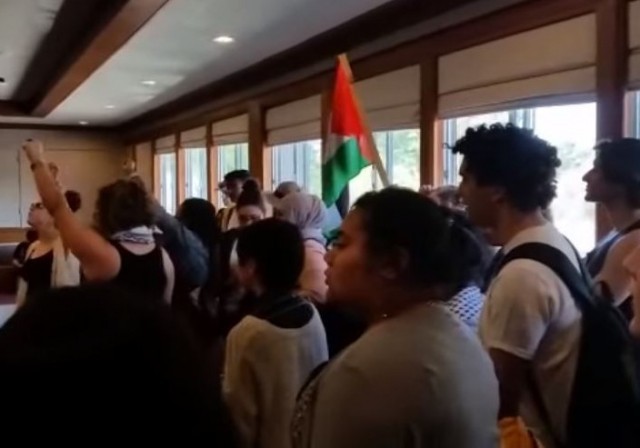 As you know if you have been reading Legal Insurrection for years, we regularly track Gallup and Pew surveys of attitudes among Americans of the Israeli-Palestinian dispute.

What we see is that support for Israel among the entire U.S. population remains at near historical highs. For example, the Gallup survey released in February 2016 demonstrated that Americans still overwhelmingly support Israel:

The survey shows that support for Israel versus the Palestinians remains near historical highs, slightly up from last year: 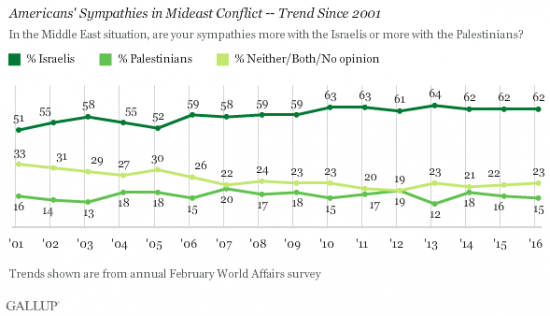 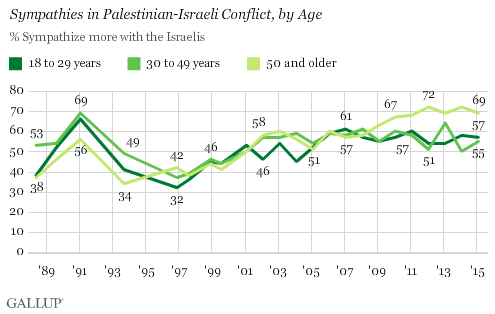 Pew just released a survey which generally confirms the Gallup overall findings of a wide gap overall in favor or Israel: 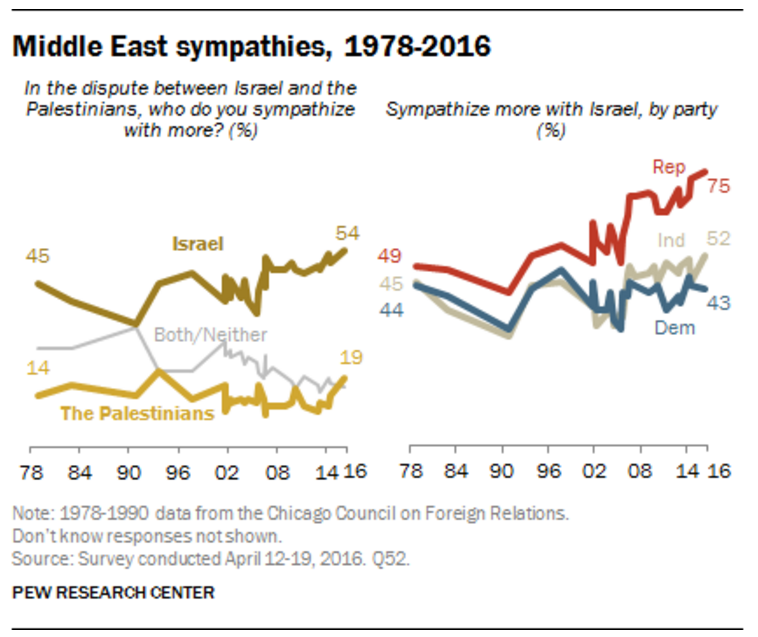 Yet there was one finding that is generating a lot of glee among anti-Israel websites, and concern among pro-Israel websites. Pew found that among millennials (born 1980 or later) the gap has substantially narrowed, and among Bernie Sanders supporters, there is more sympathy for Palestinians: 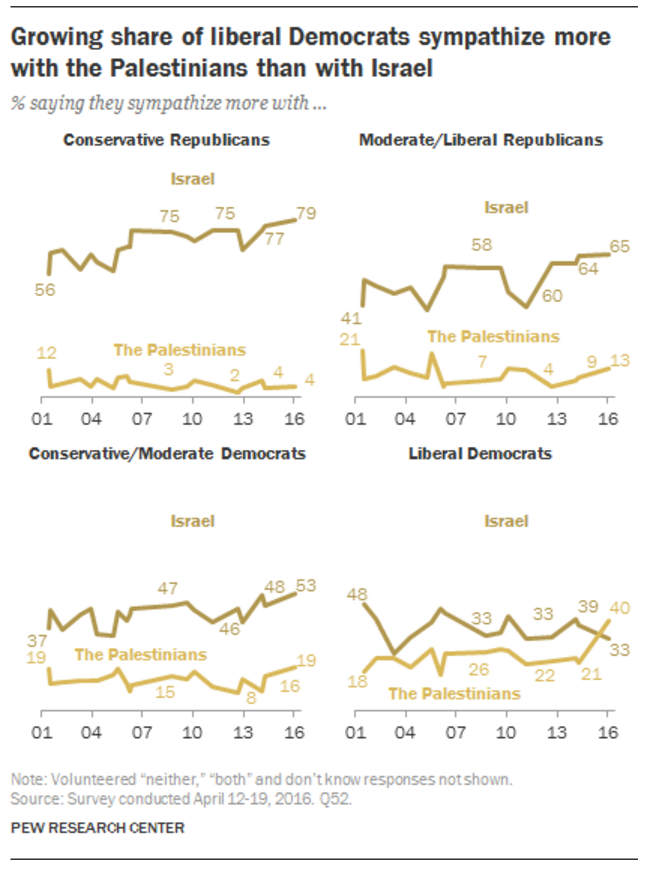 There also was a narrowing of the gap among millenials:

There also are generational differences in sympathies in the Israeli-Palestinian conflict. Older generations tend to be more sympathetic toward Israel than younger generations. 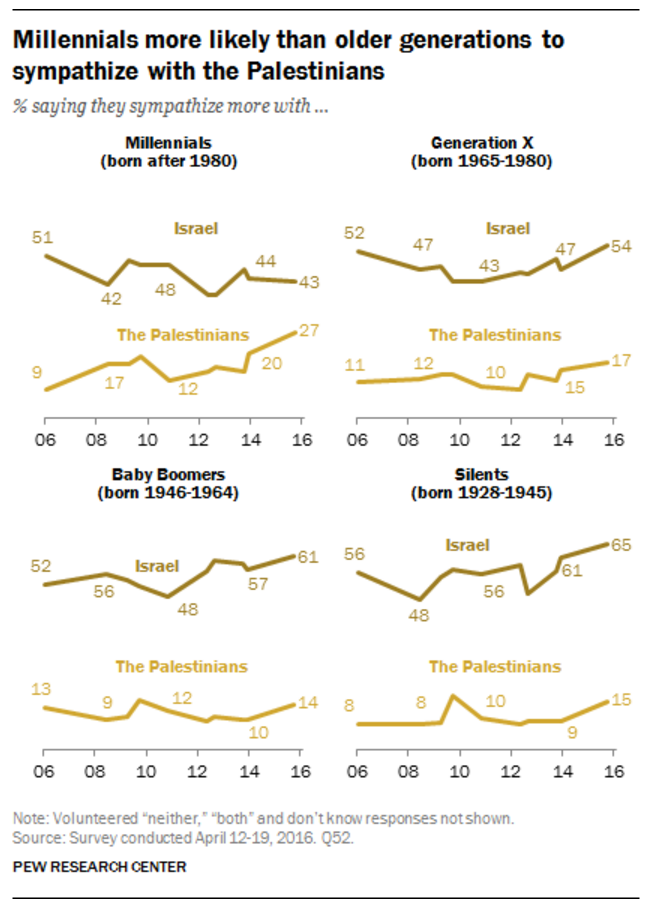 The takeaway from the Pew survey is that the younger generation is moving away from overwhelming Israel support, particularly the most liberal wing of the Democratic Party as reflected in Bernie Sanders supporters being more sympathetic towards Palestinians.

None of this is a great surprise. The anti-Israel movement, reflected most prominently in the BDS movement and its groups, has not achieved any major measurable electoral or political success in the U.S.  But at least on campuses for the past several years, the relentless anti-Israel propaganda and smear campaign has the effect of portraying the Palestinians as pure victims, and the Israelis as pure victimizers.

The BDS movement on campus is not actually about divestment resolutions or boycotts — those are mere tactics. The goal is to shift the dialogue to how bad Israel is. Thus, if a BDS group can get the campus to spend weeks or months arguing whether Israel is merely bad, or so bad that it should be boycotted, BDS considers a voting loss to be a win. What is important is to put Israel on trial.

Faculty play a key role in setting this campus atmosphere. As we have documented here dozens if not hundreds of times, anti-Israel faculty devote themselves to the anti-Israel cause and use their influence to push the agenda. Hiding behind academic freedom, they have in reality abandoned academics in their classes and become political activists who teach. They are proud of that.

I can’t say to a certainty that the Pew findings among millennials reflect this anti-Israel campus activism, but there is no other identifiable source. That there is a pro-Israel trend among all sectors of the population other than the youngest progressives supports this conclusion.

Israel is not alone in being the subject of wrath from young progressives — just about every traditional American policy is disfavored by this group as reflected in the wider survey results. Anti-Israelism, in my view, is just one facet of left-wing ideology taught on campuses without toleration of dissenting views.

This should serve as a wake up call. While overall all is well, there is a slice of the population which is seeing progressive politics wrapped up in being anti-Israel, and that is taught and learned on campuses nationwide.

As I write this, I am watching Simone Lagrange tell her Auschwitz survivor story on France 2 thanks to a VPN.

Bernie supporters NEED to sit down and watch stories like hers.

We simply must never forget.

Bernie supporters are young, but not stupid. They have been fed propaganda. this can be rectified. Tell the truth.

It’s not that simply. Telling the truth about Israel only makes you a racist in their eyes.

Well, that is the accusation Hamas likes to use. However, it grows stale with time and the exposure of lie after lie. This is a winnable battle. It does have to be re-fought due to the fresh supply of gullible minds each year.

Unfortunately they have been indoctrinated, and when it comes to questioning their beliefs, it becomes a psychological melodrama to accept facts opposed to their academic view of the world.

Not long ago I met some well known, obsessed antizionist activists who told me sneeringly, with hollow eyes and bile practically dripping from their fangs, that they are targeting the young on the Internet, to teach them to hate Israel, and “the kids love it, they are the future of antizionism..” [insert hysterical cackling here]

I would like to see a survey of black college students and ask if they think it would be ok to own white people as slaves in order to make up for white people having blacks as slaves. I think I know the answer.

Articles like this underline the critical importance of Legal Insurrection in educating, reminding, motivating, and also of contesting the lies put out by the anti-Israelis.

LI is one of the best, and perhaps the best in that regard.