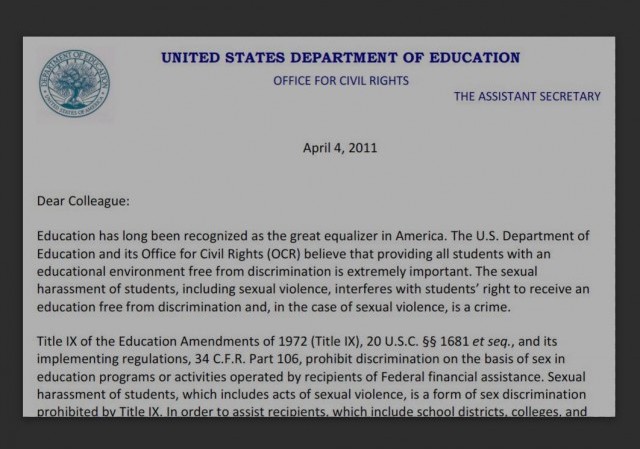 Our generation is enduring a crisis, yet very few of us are actually aware of its existence.

On April 4, 2011, the Office for Civil Rights of the U.S. Department of Education (OCR) released what has come to be known as the “Dear Colleague” letter (DCL).

As a preface, Title IX is a federal statute that forbids discrimination on the basis of sex, and OCR is an office within the Department of Education that is tasked with enforcing Title IX on federally funded colleges and universities. Therefore, this bureaucratic office holds authority over the vast majority of college student’s schools. A violation of OCR policy could result in the loss of federal funds that are vital for any school’s operations, so OCR often issues guidance to colleges and universities on how to maintain compliance. DCL is one such issuance of guidance.

So where is the crisis?

The OCR directives contained in the 2011 DCL greatly threaten our rights to free speech and due process on our college campuses.

In short, the 2011 DCL provides no substantiated protections of speech, allowing school rules to quantify jokes, questions, and passing remarks as sexual harassment, and it imposes disciplinary procedures that violate the due process rights of students accused of such harassing conduct. Further details on how DCL violates our rights to free speech and due process are provide in the letter below this article.

Facing the threat of losing federal funds, colleges and universities all around the country have adopted DCL’s guidance, resulting in an increasing number of lawsuits by students denied due process in campus proceedings.

The Senate is currently deciding on whether or not to fulfill a request of additional funding OCR with $137.7 million. Prior to making a decision, the Senate allows a period of public commentary for citizens to submit their thoughts on the proposal.

I have drafted a letter, the contents of which are posted below this article, requesting the Senate to withhold these funds until OCR readjusts its guidance to conform with students’ legal rights to free speech and due process on their campuses.

Within two days of outreach, over 100 students from across the country have added to my letter their names and the names of the college/university in which they attend as a show of support. Since everything is submitted electronically, I have been personally adding this information to the word document that the letter is written on. No physical signatures are needed, all that is required is approval for me to add your name and school.

If you or a student you know is interested in adding your name in support, contact me via my email address [email protected]

The more support the letter receives, the more powerful each name below it becomes. Our generation can no longer tolerate bureaucratic overreach blatantly violating our protected rights. This letter allows us to voice our disapproval of OCR’s directives, and you adding your name in support goes a long way toward making that voice louder.

Jake Goldberg & Fellow Students
Prepared for the Subcommittee on Labor, Health and Human Services, and Education, and Related Agencies
Department of Education

I am writing on behalf of myself and my fellow students, whose names are listed below as a pledge of support, to express our strong disapproval for Senator Gillibrand and her colleagues’ request for $137.7 million in FY 2017 for the Office for Civil Rights of the U.S. Department of Education (OCR). We believe that no further funding should be provided to this department until OCR revises its illegal and immoral guidance to our colleges and universities.

Through its 2011 “Dear Colleague” letter (DCL), OCR has severely threatened students’ rights to free speech and due process on our college campuses. DCL fails to explicitly differentiate offensive speech from sexually harassing conduct. This was not always the case with OCR guidelines. In OCR’s 2001 Guidance, acceptance of the Supreme Court’s Davis v. Monroe delineation between free speech and sexual harassment was unequivocally stated. In 2003, OCR’s DCL once again clearly substantiated the separation between offensive expression and sexual harassment. However, these protections were lost with the issuance of the 2011 DCL, which lacked any substantial speech protective directives. This lack of safeguarding free speech enabled OCR’s 2013 Findings Letter with the University of Montana to further jeopardize our rights. This document created a broad definition of sexual harassment by defining it as unwelcome conduct of a sexual nature that does not have to be objectively offensive. Though expressed as non-binding, this definition has still been widely adopted by our campuses all across the country. By allowing vague and far-reaching restrictions on speech to be incorporated into sexual harassment policies, DCL’s directives have led to the deprivation of our constitutional and contractual rights to free speech and expression.

Equally as important is the fact that the mandates set forth in the 2011 DCL have forced our schools to enact policies which effectively deny us of our due process rights when we are accused of violating sexual harassment policies and face disciplinary proceedings. By mandating a preponderance of the evidence standard for vague and far-reaching sexual harassment codes, DCL promotes a standard of evidence that is inconsistent with the severity of alleged conduct. Colleges and universities have responded to the mandates of OCR by establishing biased procedures with no regard to due process protections or a presumption of innocence. There is no reason that sexual harassment cannot be adequately addressed and simultaneously provide all students involved with fair and balanced procedures.

We will never support codes that promote disciplinary proceedings with high risks of error, as such flawed proceedings serve the interests of neither party involved. We will never support overly broad definitions of threatening conduct, as such policies undermine those who truly suffer from deplorable acts of sexual misconduct, and result in innocent people being accused of serious violations. OCR’s guidance does not offer more security for those who genuinely need it. Its guidance allows for the punishing of those of us who hold thoughts and beliefs which others simply don’t wish to hear. Its guidance promotes biased, unfair procedures through illegal mandates that our schools are forced to adhere to. OCR’s guidance does nothing to protect our civil liberties; it destroys them.

Let us be clear. Today our voices number in the hundreds, next month they will be in the thousands, and within a year we will number over a million. We will not go away; we will no longer be silent; we will always be monitoring OCR’s actions. We as students will no longer tolerate unelected, unaccountable bureaucrats usurping our rights to free speech and due process. We will not stop speaking out until our requests become our realities. Our generation has ideals and views that should rise to the stars, yet OCR’s actions leave us suffocating in the strict stripes of their red tape. For these reasons, we ask that you withhold funding for the Office for Civil Rights of the U.S. Department of Education until they change their guidelines to conform with constitutionally established principles of free speech and due process. We appreciate your consideration of this request.

The author is a Freshman at Tufts University in Medford, Massachusetts.

(Oh, and dude… a word about writing headlines. The article is awesome, the headline, well, zzzzzz).

Fine work indeed! But I don’t see where to “add my name”.

“If you or a student you know is interested in adding your name in support, contact me via my email address [email protected].”