Public statement in itself is interference in FBI investigation 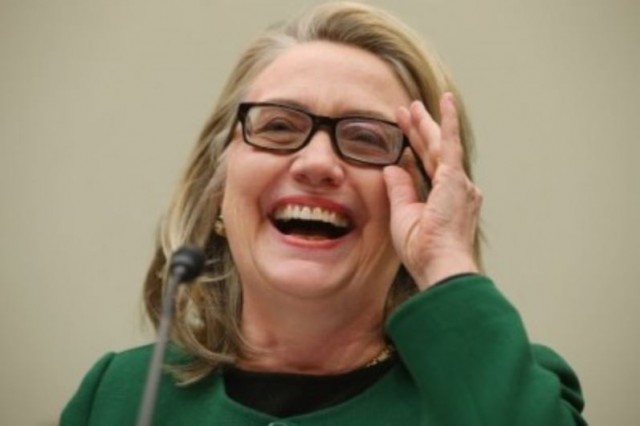 President Obama has a history of publicly defending Hillary Clinton on her email scandal, and he did it again today on Fox News Sunday.

Such public statements in and of themselves are improper political interference in agencies that report to the President.

In a 60 Minutes interview in October 2015, Obama pretty much signaled Justice to lay off Hillary (emphasis added):

Steve Kroft: Did you know about Hillary Clinton’s use of private email server–

Steve Kroft: –while she was Secretary of State?

Steve Kroft: Do you think it posed a national security problem?

President Barack Obama: I don’t think it posed a national security problem. I think that it was a mistake that she has acknowledged and– you know, as a general proposition, when we’re in these offices, we have to be more sensitive and stay as far away from the line as possible when it comes to how we handle information, how we handle our own personal data. And, you know, she made a mistake. She has acknowledged it. I do think that the way it’s been ginned-up is in part because of– in part– because of politics. And I think she’d be the first to acknowledge that maybe she could have handled the original decision better and the disclosures more quickly. But–

Steve Kroft: This administration has prosecuted people for having classified material on their private computers.

President Barack Obama: Well, I– there’s no doubt that there had been breaches, and these are all a matter of degree. We don’t get an impression that here there was purposely efforts– on– in– to hide something or to squirrel away information. But again, I’m gonna leave it to–

Steve Kroft: If she had come to you.

President Barack Obama: I’m going to leave it to Hillary when she has an interview with you to address all these questions.

It happened again in January 2016, with the press secretary predicting no indictment, White House puts thumb on scales of Justice: Hillary “doesn’t seem to be headed” to indictment, as reported by The Washington Examiner:

The president’s top spokesman said he sees no reason for Democrats to find an alternative presidential candidate in case Hillary Clinton is indicted over her mishandling of classified material on her private email server.

Earnest also tried to counter a steady stream of largely GOP predictions that Hillary Clinton will face a Justice Department indictment for the email scandal.

“That will be a decision that will be made by the Department of Justice,” he said. “Some officials have said she is not the target of the investigation and it does not seem to be the direction in which it is trending.”

Pressed again on whether he believed Clinton could get indicted, Earnest said firmly: “It doesn’t seem to be headed in that direction.”

Now Obama has done it again this morning on Fox News Sunday, asserting that he’s confident Hillary never did anything intentional to jeopardize national security, and dismissing the “classified” issue as overblown:

President Obama in an interview broadcast early Sunday said he had to be “careful” in answering a question about whether Democratic front-runner Hillary Clinton jeopardized national security by using an private email server while secretary of State.

“I’ve got to be careful,” Obama told “Fox News Sunday” in an interview taped last week.

Obama said Clinton has acknowledged a “carelessness” in managing emails, but maintains that she didn’t jeopardize national security.

“I continue to believe that she has not jeopardized national security,” Obama said.

“There’s a carelessness in terms of managing emails that she has owned and she has recognized, but I also think it’s important to keep this in perspective. This is somebody that has served her country for four years as secretary of State and done an outstanding job.”

He also said Clinton would receive a fair investigation not tainted by politics.

“Nobody gets treated differently when it comes to the Justice Department,” Obama said. “Nobody is above the law.”

Perhaps now we know why Hillary is so confident nothing will happen to her.

On Face the Nation on March 7, 2016, Hillary rejected the suggestion that she might be indicted:

John Dickerson, host of CBS’s “Face the Nation,” told Clinton he has “talked to Democrats and they worry that somebody is going to get indicted.”

“Well, there is no basis for that,” Clinton responded.

Worse still, Clinton blamed the State Department for the classification problem, making light of the situation.

At the March 9, 2016, Democratic Debate, Hillary scoffed at the idea that she would be indicted:

Hillary reiterated the lack of concern on Meet the Press today, saying she’s “not at all worried about it”:

The FBI has not reached out to Hillary Clinton to schedule an interview over her private email server, the Democratic front-runner said in an interview Sunday.

“No. No, they haven’t,” Clinton told NBC News’ “Meet the Press,” when asked whether federal investigators had been in contact with her. “But you know, back in August, we made clear that I’m happy to answer any questions that anybody might have. And I stand by that.”

Pressed on whether the FBI probe could interfere with her path to the nomination, Clinton said she was not “concerned” about it.

“I don’t think anything inappropriate was done,” she said. “And so I have to let them decide how to resolve their security inquiry. But I’m not at all worried about it.”

Is the fix in?

Maybe not technically, but Obama is doing everything he can to send signals to the FBI and his Attorney General.

How in the name of the “Wide World of Sports” are we to accept anything al-Chicagi says? This is the man who just gave the Bomb to the Mad Mullahs, refused to cross his heart when the Anthem was playing but did so when in Koouba.

If al-Chicagi is giving her cover, it is a good sign she is more corrupt than we think.

You bet, in a commercial setting, none of this behavior would be tolerated. To go behind your boss’s back and set up a complete email system – “Did you know about the server?” “No” -the only question is how fast is that employee out the door. Of course, the President has to say “believes” because the FBI cannot share any information with him – he would have to find out from Ms Lynch “after hours”. While he’s at it, he could also ask his employee why she hired someone who he expressly told her not to hire, that’s Sid Blumenthal, and just exactly how Sid came into possession of NSA intelligence which he then forwarded to her without marking it “classified” or “not that top secret”.

There was a time when the President’s desk in the Oval Office had a sign that read “The Buck Stops Here”. With this one, he ought to have those three little monkeys with their hands over their eyes, ears, or mouth.