“To be honest, I think this really comes down to control.” 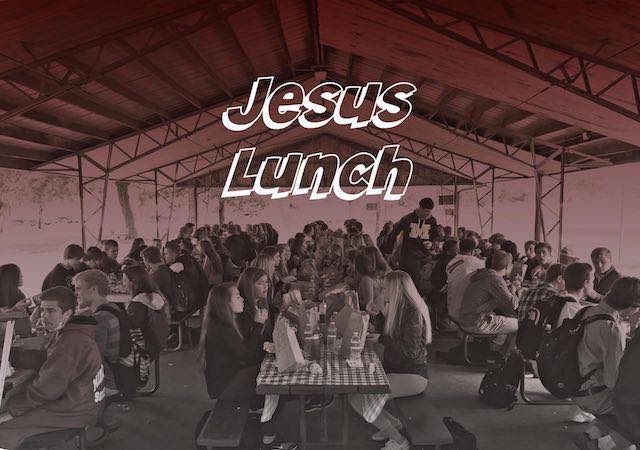 In what some might be the next standoff over religious liberty, a high school near Madison, Wisconsin is at odds with an off-campus student lunch group over the right to hold free, Jesus-themed lunches.

[Middleton] high school allows students to eat lunch off-campus. In 2014 a small group of parents began meeting with their children in a nearby park — providing home cooked meals along with a Christian-themed, inspirational message.

The small weekly gatherings in the fall and spring eventually morphed into a popular gathering spot for hungry kids — with nearly 500 turning out for all sorts of goodies — ranging from Chick-fil-A sandwiches and fresh fruit to hundreds of homemade brownies.

“We show up every week just to show the love of Jesus,” parent Beth Williams told me. “Our mission statement for Jesus Lunch is ‘food for the body, nutrition for the soul.’”

As students started inviting more friends to attend, the gatherings have brought as many as 400 hundred students to the lunches, which are held at a park directly next to the school campus.

The lunches have since been referred to as “Jesus lunches.” The five parents organizing the lunches say students are handed a free meal that is eaten at the park’s pavilion. At some point during the meal, a “two to five minute” biblical message is given.

When asked whether students were required to listen to the biblical portion of the event in order to receive lunch, mother Melissa Helbach insisted the answer was no. “It’s all by choice,” she said in an interview on Friday. “We are there to love up on the kids. If you want to hear some biblical truth, come along. If you don’t, that’s fine.” Helbach added that it’s not uncommon for students to come, grab a sack lunch, and leave before the spiritual message begins.

For the first year, everything between school administrators and students and parents of the Jesus lunch was fine. In October of last year, however, school principal Steve Plank paid the group a visit claiming the group was not allowed to hold lunches at the park due to a lease agreement the school district holds with the City of Middleton. Because the agreement allows for the school to use the park during school hours, school administration claims the park is therefore school property.

On April 12, the principal and district superintendent sent a school-wide email calling for the Jesus lunches to be put to an end. The email claimed the five parents heading the Jesus lunch were in violation of several rules, mentioning food handling and campus visitors as as a primary concern. “The policies in question include food handling, visitors to campus, and expectations around student organized events,” the administrators wrote. “We are in no way interested in opposing religious practice in otherwise legal circumstances.”

On the issue of food safety, the email said:

“Food of any kind that is served to students must be approved by the school/district to ensure food safety, cleanliness and health. In addition, many students are subject to food allergies, so additional protocols must be followed to safeguard students with these conditions.”

The remaining two concerns outlined in the email continue to treat the park school property, something the organizers of the Jesus lunch claim is not the case. As a public park owned by the City of Middleton, Fireman’s Park is accessible to the entire public, the parents maintain. Even though Middleton High School holds holds a lease agreement with the city, the lease does not enable the school to, in effect, to treat the public park as its own property. The mothers of the Jesus lunch said the following in a statement on Wednesday:

As the statement says, the Jesus lunch does have its own rental agreement with the city for use of the park. The group pays $40 per week for use of the park pavilion on Tuesdays. Because Middleton High School allows all students to leave campus during lunch, the group insists that food safety is of no legal concern to the school district due to the fact the lunches are held off campus. If the school has no problem with students leaving campus for lunch at the McDonalds or Culver’s down the street, why should it care about five mothers handing out sack lunches?

Amidst mounting pressure from school administration to end the lunches, the group has since sought legal representation. “This is a group of five ladies who are mothers of some of the high school students, attorney Phillip Stamman said to WISN. These mothers love their kids and they love the students — so much so that they give up hours out of their day to cook high quality, home cook meals [and] hand them out for free.” Stamman believes the district is trying to intimidate the group and is going after the Jesus lunch not because of concerns for food safety or usage of Fireman’s Park but because the group spreads a Christian message.

When asked what he hopes to achieve, Stamman said the goal is not to go to court, however, “If the school district keeps blocking them and keeps harassing my clients, my clients have the right to exercise their first amendment and that won’t be denied.” Later on, Stamman added, “To be honest, I think this really comes down to control.”

Of course, the next step by the school will be to stop allowing students to leave campus for lunch. And no court in the land will keep them from doing that.

And properly so. If they want to implement such a neutral policy, on what grounds could or should any court interfere?

But could they keep kids from heading to the adjacent park during lunch, after the school already admitted they have a lease agreement with the City to use it for school purposes?

When asked whether students were required to listen to the biblical portion of the event in order to receive lunch, mother Melissa Helbach insisted the answer was no.

Well, that’s nice of them, but shouldn’t be relevant. If they wanted to make listening to their message the price of the lunch, that’s their constitutionally protected right. So long as kids are not given the impression that the school endorses their message, there’s no conflict with the establishment clause.

The Big Lie is, you’re supposed to believe the school administration is concerned about food safety and not acting because the religious message is annoying some parents (and perhaps some school staff).

Does anyone believe that?

Even facially neutral policies have been challenged (and sometimes prevailed) in court, when it’s apparent that the neutrality is a fig leaf (oops, religions reference) to conceal the real purpose of a restrictive policy.

Oh, you mean like requiring abortion clinics to observe the same standards as outpatient surgery centers and requiring abortion doctors to have admitting privileges at a hospital passed in the name of protecting the health of the pregnant women? That kind of fig leaf concealing the real purpose of those restrictive policies?

Though a lot turns on the exact language of the leases, it would appear to me that unless there’s a state law or local ordinance limiting the ability of cities to lease out parks, the attorney for the Jesus Lunch people is probably wrong when he says, “Fireman’s Park – a public park owned by the City of Middleton – remains accessible to everyone in the public for the purposes of assembly and free speech.” Local newspaper and TV reports say that, “The district provided 27 News a copy of the lease agreement, which allows the district to have joint control and jurisdiction of the park, including the right to enforce district rules and regulations. A sign posted at the park indicates school rules are to be followed during school hours.” It also appears that the lease may be nonexclusive, however, even during school hours, which means that other people can use it subject to school rules and regulations. There’s no question that the city could have given the school exclusive use of the park and kept everyone else out. (For example, when there’s a civic auditorium owned by a city they can certainly lease it to a concert promoter who can keep anyone out who doesn’t have a ticket. Or the city could have leased a concession stand in the park to someone and given them the right for only their employees to enter the stand.) If they can do that, then they can certainly lease this park to the school with the agreement that the rest of the public can use it, but only if they abide by school rules. One of those rules can certainly be that only school-registered student organizations can use the park (but they have to allow student religious organizations if they allow other kinds of organizations). Another can be that school-registered organizations who serve food must follow certain food regulations (though I suspect that they don’t require the chess club to have health permits when they serve snacks or have a bake sale, and might not be able to do much here). They can also limit non-faculty adult participation in registered organizations’ on-campus activities (again, I wouldn’t be surprised if there is extensive adult participation in some organizations which might also limit their ability to restrict adult activity here), but they cannot probably prevent the adults from merely being there in the park while the organization is having its lunch even if there is a general rule about adults not being on school property without permission. (I suppose that they might require all non-students, including adults, to jump through the bureaucratic hoop of asking for permission to be in the park, but their deal with the city would probably require them to promptly give that permission to everyone who asks for it.) With this analysis, I suspect that if the kids organized this as a student organization and limited the adult involvement to off-campus planning and delivering the lunches to the organization at the curb of the public street and then just hanging around in the park without participating further while the kids put on the luncheon that the school would be hard-pressed to stop it legally. Something very much like that is what’s done in many, if not most, “meet me at the flagpole” events.

jcarter50; you might have some great things to add to the conversation, but the lack of white space discourages me from reading it In the future, please consider using some paragraph breaks.