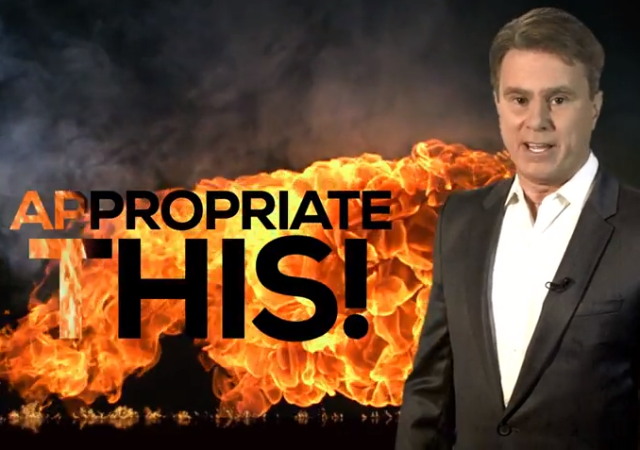 Bill Whittle’s new Firewall video is inspired by a recent incident at San Francisco State University which we also wrote about.

As usual, Whittle does an outstanding job of dismantling the left and exposing them for the hypocrites they are.

Well, “Cultural Appropriation” is the latest form of combat used by Social Justice Warriors: a term used by crybullies to describe themselves as fighters against prejudice and privilege. They are the first warriors in history to burst into tears and require weeks of therapy at the mere sight of an actual weapon.

There is only one area where these progressive milliennials are not only allowed but encouraged to compete, and that is the struggle to see who can be the biggest victim and win the Virtue Signaling Silver Cup by being most sensitive to racial and gender injustice.

Cultural Appropriation is the idea that White Males have stolen various elements of minority and female culture and used them for their own benefit without acknowledging or appreciating the suffering of the offended party.

It’s everywhere, but the best example – so far – is a video shot at San Francisco State University, where a black student confronts a white student who is culturally appropriating African-American dreadlocks. Let’s watch, shall we?

As a Straight White Male, I see these feminists and students of color appropriating my White Male culture every day. When I think of them walking around in blue jeans, using electricity to light their dorm rooms, or to run their microwave ovens so they can eat non-Anglo-Saxon food… well, frankly, it makes me sick. They sit there using their smart phones to write about Social Injustice and then use the internet to post it on Facebook and Twitter, and as a white male I find this incredibly offensive.

There’s much more and you can watch it all below:

Whittle left out one thing. The modern university, in which so many of these social justice warriors thrive, traces its origins to ancient Europe which, at the time, was whiter than a Bernie Sanders rally.

Other than that, Whittle is spot on. He does a pretty good Irish accent too.

We need to get “Participated” ribbons made up and hand them out at every protest.
Once they get their ribbon they’d probably leave to spend a few hours of selfie taking and Facebook posting.

Economist Thomas Sowell wrote a trilogy of books – “Race and Culture”, “Migrations and Cultures” and “Conquests and Culture: an international History” that address that cultures change, many times because of exposure to other cultures.

I love it, but I fear this video will convince exactly zero liberals, lefties, and SJWs.

How dare they speak English in my presence!?!