He makes the right call by stating an obvious truth, but don’t expect any policy changes 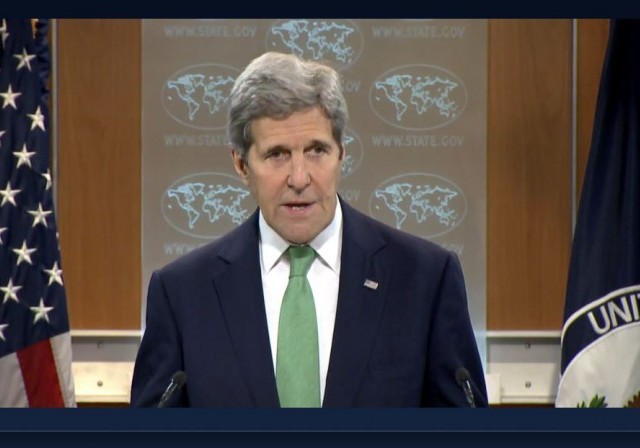 At a 9:00am press conference this morning, Secretary of State John Kerry announced that the Islamic State’s actions perpetrated against ethnic and religious minorities, including Christians, are “genocidal” and constitute crimes against humanity.

In the brief (10 minute) statement, Kerry refers throughout to the Islamic State (ISIS) as Daesh, its Arabic acronym.

W/ @JohnKerry as he announces determination that #Daesh has committed genocide against Christians, Yezidi & Shia 1/2 pic.twitter.com/CN8VC5zjRU

He details many of the “despicable” horrors that ISIS has perpetrated against the civilians under its control, claiming that “Daesh is genocidal by self-acclimation, by ideology and by practice”. Here’s the video:

In labeling ISIS’s motivations as genocidal and its actions as constituting genocide, the State Department met a congressionally-mandated March 17 deadline for making this classification.

This past Monday, in a rare example of bipartisanship, the U.S. House of Representatives unanimously (393 to 0) passed a non-binding resolution condemning the Islamic State’s atrocities as genocide.

Kerry’s announcement comes as a surprise.

In recent weeks the Obama administration had insisted that further evaluation was necessary. And at a press conference as late as yesterday, Mark Toner, a State Department spokesperson, stated that Kerry was not yet ready to make the determination of whether ISIS’s actions had met the legal standard of genocide, and would need more time to review the available evidence and ponder the “legal ramifications” of this designation.

Toner confirmed that the State Department would not be meeting the deadline set by Congress, and also said that waiting to make the determination would be “worth it”.

So everyone following this issue (see for example here and here) was pretty much certain that Kerry would let the deadline lapse.

As for me, I was hedging my bets. It wouldn’t be the first flip-flop of this administration. So I wrote in a post yesterday that:

While some were hopeful that Kerry would concur with the House, it’s looking increasingly likely that he’ll be dragging out the official determination, and will let the deadline pass tomorrow without any action”.

Kerry—unexpectedly—has done the right thing, although it should never have taken this long.

Thank you to the 140K+ who signed our petition- @JohnKerry has recognized genocide against #ChristiansAtRisk https://t.co/D5TLtKUSzm

@StateDept @KatiePavlich @JohnKerry Wow finally you guys did something right

@StateDept @JohnKerry Well it's about time!

Seems a little late that Kerry is just now “confirming” ISIS is committing genocide against Christians. Better late than never, I suppose…

As I noted in yesterday’s post, the designation can’t come too soon for the Middle East’s suffering Christians:

Officially classifying the Islamic State’s atrocities as an unfolding genocide would certainly help to bring about a global response to this crisis. Speaking up for the Middle East’s beleaguered and brutalized minority population would invoke a ‘responsibility to protect’ and, as has been noted, ‘there are a series of actions that [would] immediately come into play to stop [the genocide].”

But in his statement this morning, Kerry makes a point of noting that classifying “Daesh’s” actions as amounting to genocide doesn’t place any “legal obligation” on the United States to act.

Kerry: ISIS is Committing Genocide BUT does "not necessarily result in any particular legal obligation for US" #SMDH https://t.co/GpPGnNQivA

Long after everyone else, Kerry boldly pronounces ISIS committing genocide against Christians, will do nothing. https://t.co/FQWNjccoa2

So basically, the State Department’s declaration, long sought after by U.S. lawmakers and human rights and faith-based organizations, “changes little”. Kerry makes it clear that it doesn’t require the Obama administration to take any additional actions against ISIS, to change strategy, or to step-up its game in any way.

designating the Islamic State’s actions against Christians and other minority groups as genocide would require that the President commit to doing more in a world region that he simply doesn’t think is “terribly important to American interests” and from which he desperately wants to disengage”.

Miriam F. Elman is an associate professor of political science at the Maxwell School of Citizenship & Public Affairs, Syracuse University. She is the editor of five books and the author of over 60 journal articles, book chapters, and government reports on topics related to international and national security, religion and politics, the Middle East, and the Israeli-Palestinian conflict. She also frequently speaks and writes on the Boycott, Divestment, and Sanctions (BDS) anti-Israel movement. Follow her on Twitter @MiriamElman