It’s not about Trump, it’s about protecting candidates and the political process. 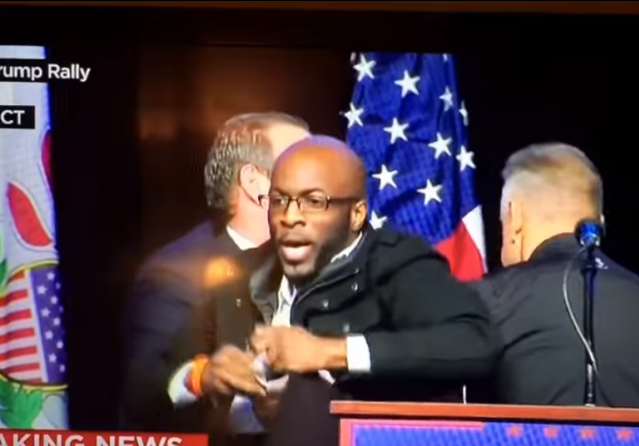 One of the most difficult things in politics is to defend the rights of politicians you otherwise might not want to defend.

One of those cases was the defense of Sarah Palin against a vicious left-wing smear machine that targeted even her youngest child, who was mocked not only for having Down Syndrome but for not having been aborted. The sexist distortions and outright lies about Palin reached an apex when she was blamed by left-wing bloggers for the shooting of Gabby Giffords and murder of others by Jared Loughner. The excuse was that Palin allegedly used incendiary words and created a climate of fear; a national electoral map she used which had crosshairs over some districts was blamed directly.

In reality, Loughner was a psychotic person who, to the extent his politics were of this world, leaned left. There is no evidence Loughner ever saw the map in question. Loughner was held mentally unfit for trial. Yet Palin was blamed, and even some Republicans joined in the chorus.

If Palin is taken down politically over the Tucson shooting, there is not a single Republican candidate who can survive the coming onslaught.

Friday night was another of those occasions, regarding the organized disruption of a Donald Trump event at the University of Illinois – Chicago.

The event devolved into mayhem and scuffles when a large number of pro-Bernie Sanders and other protesters entered the venue for the very purpose of disruption.  If you’ve seen the videos, you should agree that it probably was a smart decision to cancel the Chicago event.

MoveOn.org bragged afterwards about keeping Trump from speaking, and that it was proud of the result. I expect that many of the “protesters” were hardcore Occupy, anarchist and professional radical types who have a strong presence in Chicago.

One person even tried to take over the podium before Trump took the stage. Taking over a political candidate’s podium is crossing a line — it’s a direct security threat and an act qualitatively different than mere protest outside or even in the audience. If you think things are bad now, just wait until some person insistent on stopping a candidate’s “hate” speech gets on stage with a weapon.

Another attempt was made to rush the podium while Trump was on stage today in Ohio. I would not be surprised to see more of that.

Many Republicans, unfortunately, have blamed Trump for the violence and conflict at the UI-Chicago venue because he has contributed to an atmosphere of confrontation. Yet the specific violence and suppression of speech Friday night was not caused by Trump, any more than the Gabby Giffords shooting was caused by Sarah Palin’s rhetoric or map.

Blurring Trump’s rhetoric and the specific disruption Friday night is misguided. There should have been an unequivocal condemnation of the line that was crossed, both because it’s dangerous and because it’s likely to be crossed against other Republican candidates on a variety of issues.

Shout-downs and disruptions of non-leftist speech have become common on campuses. Remember, Chicago is one of the places where they tried to ban Chick-fil-A because it allegedly spread hate. So it doesn’t take much for leftists to shout about “hate” and to use that as an excuse to suppress the rights of others.

Disruption of opposing speech is THE preferred tactic among campus leftists. If you think the disruption of Trump’s event was about Trump, then you haven’t paid attention to what is going on on campuses.

If Donald Trump is not the nominee, there still will be disruptions of the Republican nominee. Because that has proven to be a successful tactic, one partially enabled by Republicans who — out of hate for Trump — are willing to look the other way.

It is probably an organized effort to assassinate Trump. If they can have a riots at his talks, then when the assassin is successful, everyone will say that is no surprise. The investigation will be about as effective as it was when the justice department investigated the IRS.

Trump supporters online keep saying “wait until they come after YOUR candidate,” but that won’t happen.
The reason BLM targets Trump is because his supporters are most likely to lash out in reaction. In fact, it’s mostly ONLY his supporters who do that.

Rubio, Cruz and Kasich have as much violence in their audiences as your average Tea Party rally: zero.
If they were set upon by BLM, you would see them react in a calm manner, waiting for the police to clear the disturbance.

I predict for this reason, you will NEVER see a BLM attack on those other campaigns.

I find these protests disgraceful.
And that anyone could possibly imagine that the Trump supporters had anything to be blamed for is unfathomable.

Yet, that is all you hear… the Hateful Trump Supporters, those awful people who were so eager to take time from their busy day to come hear him speak… they must be silenced, and punished.
I have been a Cruz supporter, but this is pushing me more each day to migrate over to the Trump camp.

The other Republicans, they are jumping aboard this charade as if it were a carnival ride.
They won’t much like it when it is their turn.