At which point Christie put back on his little black dress, and did the walk of shame. 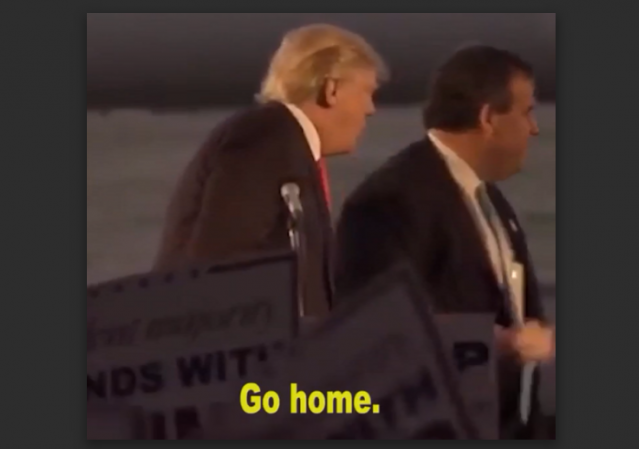 Chris Christie’s endorsement of Donald Trump on Friday, February 26, 2016, served the primary purpose of deflecting for a news cycle or two the media momentum gained by Marco Rubio and to a lesser extent Ted Cruz coming out of the Thursday night CNN Debate.

Whether it changed a single vote is doubtful, but it was a good PR move by the Trump campaign.

The endorsement was considered by prior media fans of Chrisie to be a betrayal of everything Christie supposedly stood for. Jennifer Rubin at The Washington Post wrote, Chris Christie’s despicable endorsement of Trump:

No matter how cynical one becomes about politics, it seems never to be enough. One hopes that with this irresponsible, soulless act, Christie’s career comes to an end.

Many speculated that Christie was vying for an Attorney General nod in a future Trump administration, or less likely given the geography, a VP nod on the ticket.

But it appears that The Donald is treating Christie like a one-night stand. At a rally the next day, Trump pointedly pointed for Christie to leave the stage.

That visual caused me to tweet that Trump didn’t respect Christie in the morning: 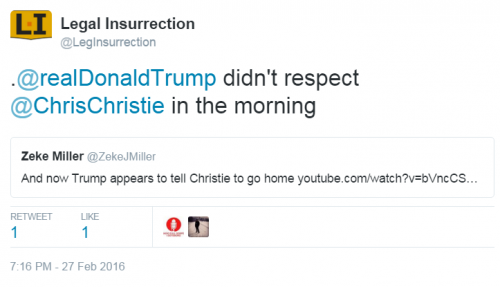 I didn’t realize until today how right I was, because I relied on the visual and missed the key sentence audible on the tape.

Trump told Christie: “Get on the plane and go home.”

At which point Christie put back on his little black dress, and did the walk of shame.

People should read that blurb to see just how delusional you are.

TrumpBart is just the propaganda organ for Der Donald, and they’re VERY selective about pulling quotes from UNDISCLOSED larger comments.

Agreed. No endorsement by forbes. No condemnation and some praise as well.

Before this thread runs its course –

I made my comments about what I thought of this post.

I also think Mr. Jacobsen is a fine man and true conservative.

When this election is over and done it would be to the benefit of all of those that value freedom and liberty to remember we may disagree on many things, large and small, but we will always have to continue the fight against the march of the left, and the voice of Mr. Jacobsen is a very valuable one in that endeavor.