The Costs of Outsourcing America’s Foreign Policy to Iran

The Costs of Outsourcing America’s Foreign Policy to Iran

America retreats, Iran advances, and people die by the tens of thousands 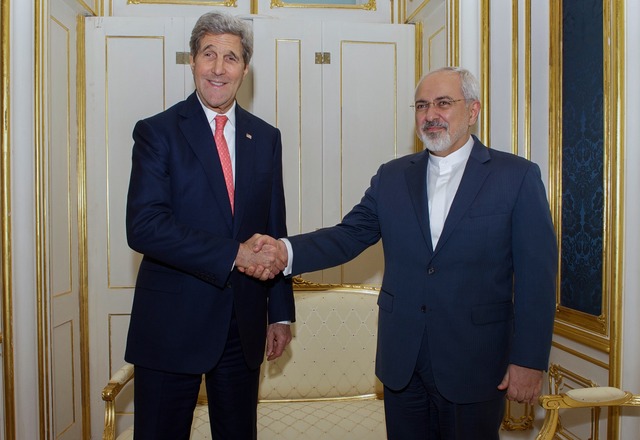 While President Barack Obama and Secretary of State John Kerry have assured us that the nuclear deal with Iran has delayed war, Tony Badran in a devastating critique of the administration’s foreign policy last week wrote, “Middle Easterners are not so lucky: They get to fight their wars with Iran right now.”

Back in 2014, Badran noted, President Obama said of the turmoil in the Middle East, “A lot of it has to do with changes that are taking place in the Middle East in which an old order that had been in place for 50 years, 60 years, 100 years was unsustainable, and was going to break up at some point. And now, what we are seeing is the old order not working, but the new order not being born yet — and it is a rocky road through that process, and a dangerous time through that process.”

But a few months earlier, Obama, in an interview with Jeffrey Goldberg, made very clear that his intent was to make Iran an agent of changing the orders. When Goldberg asked him why the Sunni states seem to fear him so much Obama answered, “I think that there are shifts that are taking place in the region that have caught a lot of them off guard. I think change is always scary. I think there was a comfort with a United States that was comfortable with an existing order and the existing alignments, and was an implacable foe of Iran, even if most of that was rhetorical and didn’t actually translate into stopping the nuclear program. But the rhetoric was good. What I’ve been saying to our partners in the region is, ‘We’ve got to respond and adapt to change.'”

In other words, what Obama was saying  to the Sunni states wasn’t “let’s see how Iran reacts,” but rather “the United States is now working with Iran, whether you like it or not.

The foundation of the new American-approved security framework was the recognition and respect of what Obama refers to as Iran’s “equities.” This translated into legitimization of Iranian spheres of influence throughout the region, especially in Iraq and Syria. For Obama, this recognition of Iran as a regional pillar worked on several levels, especially as it was in accord with the president’s clearly broadcast aversion to military intervention. Elevating Iran’s regional position provides the president with the possibility of establishing an alternative security structure, one that no longer relies on U.S. military power.

Obama has repeatedly described the foundation as well as purpose of this new structure as establishing “equilibrium” between “the Shiites”—which, for Obama, means Iran—and “the Sunnis,” primarily meaning the Saudis. But this was effectively meaningless. In practice, Obama was looking for Iranian cooperation on key regional issues in order for him to shrink the American military footprint in the region. However, the president needed a mechanism that would, in one fell swoop, reduce tension with Iran and open the door to pursue cooperation in other areas. This, in short, is the purpose of the Joint Comprehensive Plan of Action.

(The idea that the nuclear deal has played a role in improving relations and greater cooperation with Iran was evident in Kerry’s misplaced praise for his own diplomacy in releasing the sailors who were seized by Iran last month.)

But as Badran pointed out, where the Obama administration only sees greater cooperation with Iran on regional issues, “Iran has naturally been seizing the opportunity to leverage U.S. support to advance its own regional interests, which happen to run squarely against the traditional American alliance system.”

It’s foreign policy with blinders and it’s America’s allies who suffer the consequences.

As Badran explained, the old regional order is changing (or has changed) because Obama is no longer invested in it. In Iraq, the United States is supporting a government that has been compromised by Iran and an army that cooperates with Iran-backed militias. In Lebanon the United States supports the Lebanese Armed Forces, which works with the Iranian-backed terror group Hezbollah.

And in Syria has pressured rebel groups to stop fighting against Assad. Iran supports Assad in order to ensure it has access to the Mediterranean and a(nother) border with Israel.

So the situation we have Badran summed up, “Put differently, the people of Syria will continue to die and flee in large numbers. Only with the president’s Iran policy, the United States is now actively cooperating with the actor most responsible for their death and misery.”

Nor is Badran alone is this assessment. An editorial in The Washington Post last week, accused the administration of “enabling … war crimes” in Syria by its passivity in the face of Iranian- and Russian-backed aggression in Syria. (I will admit here that for some unfathomable reason Post didn’t mention Iran at all in the editorial. But the passivity is the result not wanting to challenge either Iran or Russia, both of whom support Assad.) Emile Hokayem, a Senior Fellow for Middle East Security at the International Institute for Strategic Studies, described Obama’s approach to Syria as a “betrayal” of the American-backed rebels, in an article published Friday in Foreign Policy.

A year ago Michael Doran wrote Obama’s Secret Iran Strategy in Mosaic. In the article he laid out the evidence of the administration’s tilt to Iran. In the end Doran summed up how Iran felt about its dealings with the United States and the nuclear negotitions:

They, for their part, at minuscule and temporary inconvenience to themselves, have not only reaped the economic and diplomatic rewards pursuant to participation in the JPOA but also fully preserved those nuclear ambitions and the means of achieving them. Having bested the most powerful country on earth in their drive for success on their terms, they have good reason to be confident.

What Tony Badran has done is offer a progress report of the cost of that policy shift, so far.

Obama enjoys coronation as peacemaker at the cost of tens of millions of lives murdered, raped, uprooted, displaced, and aborted. Iran gets some really cool technology, including whatever they could scavenge, copy from our captured ships. It seems like a fair trade in order to realize progress, or something.