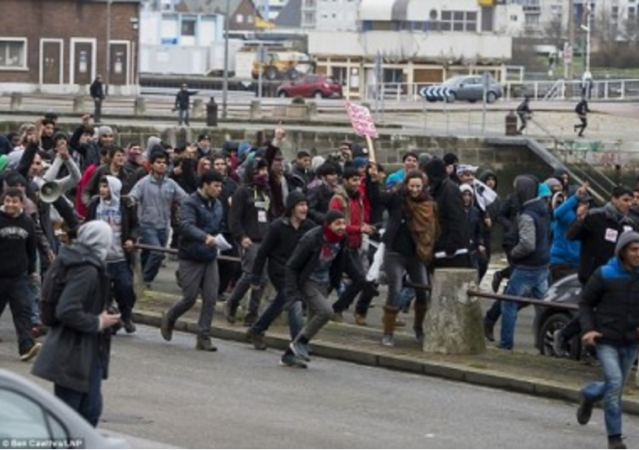 This is potentially disturbing and seems to be part of a trend in Western Europe:

Following a report of a series of alleged offensive online posts relating to Syrian refugees living in Rothesay on Bute, Police Scotland confirmed on Tuesday that a 40-year-old man, understood to be from the Inverclyde area, had been arrested under the Communications Act…

Following the arrest, Insp Ewan Wilson from Dunoon police office said: “I hope that the arrest of this individual sends a clear message that Police Scotland will not tolerate any form of activity which could incite hatred and provoke offensive comments on social media.”

In the United States, the only way this sort of arrest might be justified would be if the social media postings were used to specifically call for an imminent act of violence against refugees. That would be tantamount to enforcing our own very limited “incitement to riot” exceptions to our free speech policies.

But until we learn that’s what was involved in this incident, I’m going to assume that the Inverclyde man had been posting speech that did not rise (or sink, depending on how you look at it) to that level. After all, the police officer is quoted as saying that authorities [emphasis mine] “will not tolerate any form of activity which could incite hatred and provoke offensive comments on social media.” Sounds like he’s talking about language that might invoke a feeling (hatred) and incite more of the hateful speech.

About a decade ago, I wrote a post discussing the fact that Western Europe’s free speech protections tend to be less strong than our own in the case of libel laws. This recent incident was not about libel, however; it was about a violation of a statute known as the “Communications Act,” which has the following provisions:

Section 127 of the act makes it an offence to send a message that is grossly offensive or of an indecent, obscene or menacing character over a public electronic communications network. The section replaced section 43 of the Telecommunications Act 1984 and is drafted as widely as its predecessor.

That’s awfully broad. But interim guidelines were later issued which tempered it somewhat (however, they’re only “interim” and “guidelines”; the statute itself appears to have remained broad):

On 19 December 2012, to strike a balance between freedom of speech and criminality, the Director of Public Prosecutions issued interim guidelines, clarifying when social messaging is eligible for criminal prosecution under UK law. Only communications that are credible threats of violence, harassment, or stalking (such as aggressive Internet trolling) which specifically targets an individual or individuals, or breaches a court order designed to protect someone (such as those protecting the identity of a victim of a sexual offence) will be prosecuted. Communications that express an “unpopular or unfashionable opinion about serious or trivial matters, or banter or humor, even if distasteful to some and painful to those subjected to it” will not.

Communications that are merely “grossly offensive, indecent, obscene or false” will be prosecuted only when it can be shown to be necessary and proportionate.

Leaves a rather large opening for the prosecution, doesn’t it? What’s more:

Revisions to the interim guidelines were issued on 20 June 2013 following a public consultation. The revisions specified that prosecutors should consider:

—whether messages were aggravated by references to race, religion or other minorities…

So there you have it. A bunch of unclear guidelines that can be used to prosecute real incitements or to prosecute whatever you think is “hate speech,” if that prosecution is “necessary and proportionate.”

Again, it’s possible that this particular arrest was a proper one for something very egregious that amounts to incitement to riot. But I wouldn’t bet on it.

The charges do not need to stick to be effective. Nor was the law written and then clarified with such an intent. Those in power simply need to be able to charge someone, so that the person is humiliated as a racist and must spend money he does not have on a legal defense.

In the UK, there have been several examples of anti-Islam protestors having to make plea bargains that include serving prison time, or being convinced by lawyers to plead guilty for a suspended sentence, or some other kind if judicial leniency, only for the judge to turn around and impose near-maximum allowable sentences. Think King Joffrey and Ned Stark.

Even if a person does fight, he likely looses his job, friends, and can be forever delegitimized in the future as having been “arrested and charged with hate crimes”. It sends a clear message to others who might also disagree with the ruling powers. In this case, think Chris Kyle and his targeting of the bravest enemy, so that when said leader is taken out, whole platoons are rendered combat ineffective after their hero’s head lays splattered about the streets before them.

Lawfare works brilliantly in Europe, due to the prevalence of so many overbroad hate crime statutes, and an electorate that still generally thinks as subjects, rather than citizens.

This is what will be the end of the West: lazy citizens who put almost no thought or effort into keeping their elected representatives accountable for the laws they pass. Sadly, we in the US, collectively, are only maybe a single generation behind our European forebears in this regard.