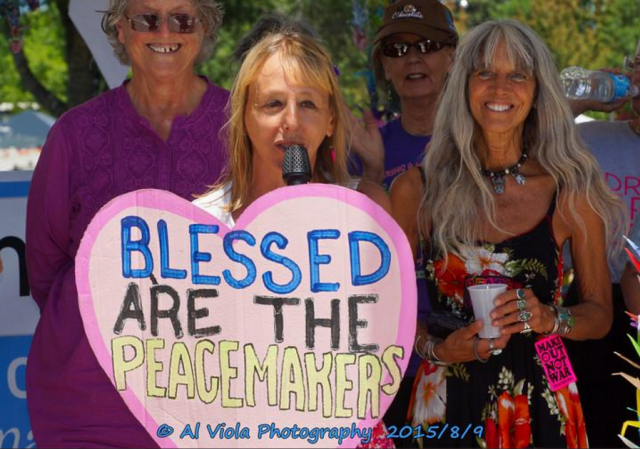 Following Trump’s eye-brow raising assertions that President Bush was not only responsible for 9/11 but purposefully and intentionally lied about weapons of mass destruction in Iraq, he faced a barrage of criticism from the right.

Those on the right argued that he was not only wrong but that he sounded a bit too much like the “Bush lied, people died” sputterings of the fringe left (and of left-leaning “journalists” like Ron Fournier).

Indeed, Dick Cheney noted on Monday that Trump’s comments make him seem like a “liberal Democrat.”

Former Vice President Dick Cheney, who served alongside former President George W. Bush, issued a bold criticism of Republican presidential contender Donald Trump Monday, saying the billionaire “sounds like a liberal Democrat” when it comes to the Iraq war and 9/11.

“You heard at the debate Saturday Donald Trump accuse President Bush and his team of purposefully lying the country into war in Iraq, saying, ‘I will tell you they lied, they said there were weapons of mass destruction, there were none. They knew there were none.’ Your response?” Fox News anchor Bret Baier asked.

Those on the right were not the only ones to note Trump’s startling assertions; those on the progressive left were positively giddy in their joy and agreement with Trump.

In an atypical gush of praise for a Republican of any stripe, Code Pink even heaps praise on Trump. 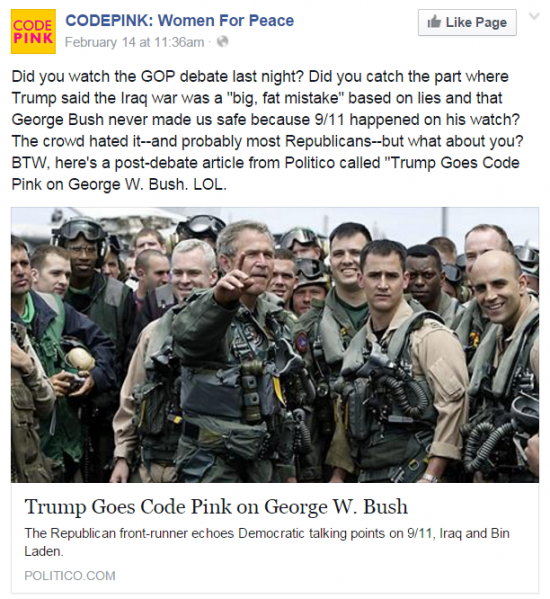 Code Pink co-founder Medea Benjamin said in an email to the Huffington Post that she “loved” the debate.

“It felt surreal to hear Donald Trump, the leading Republican contender for President, saying what we at CODEPINK have been shouting to the winds for 14 years now: that Bush and his cronies lied about WMDs, that the Iraq war was catastrophic, and that Bush never ‘kept us safe’ because 9/11 happened on his watch.”

Benjamin said that she also agrees with Trump that the war wasted money that could have been used to rebuild the country’s infrastructure — a theme the group uses in a campaign called “Bring out war dollars home.”

Code Pink’s Benjamin was so enthralled with Trump’s comments that she says she gives him “a Pink Badge of Courage.”

Not one of the things Gaghdad Bob posted or predicted.

Well, to be fair, Der Donald hasn’t had the orbs to file a lawsuit yet.

He’s just threatened, as would any bully.

Levin DOES raise a very good point, however; if Der Donald is just all talk about a lawsuit, what assures anyone about his talk about a wall? Or any other damned thing…???

C’mon, Der Donald. Don’t be a pussy. Show us you not just a lying SOS.

Answer to “Did Bush lie his way to war with Iraq?”.
Answer to “Was Operation Iraqi Freedom a strategic blunder or a strategic victory?”.

The answer is, “Yes. There is a third way. It’s called liberty and choice”.

Labrador originally supported Kentucky Sen. Rand Paul, serving as his Western States chairman. But Paul ended his campaign on February 3 after a poor showing in the Iowa caucuses and has been courted by other candidates since, National Review notes.

Although Levin has not ENDORSED anyone, he’s certainly UN-endorsed Der Donald. I think that’s true of Limbaugh, too, to a less overt extent.