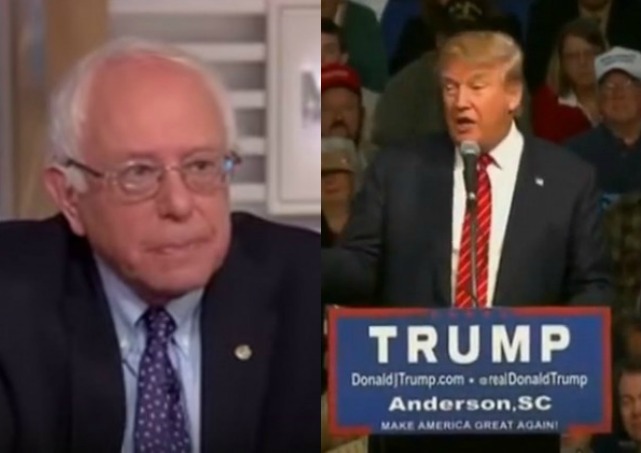 As we discussed last weekend, Democratic presidential candidate Bernie Sanders’ is wooing supporters of Republican presidential contender, Donald Trump. Not uncommon in a general election, reaching across party lines to glad-hand during primary season should be bizarre.

But in this particular election cycle, both Trump and Sanders’ strongest support comes from two strikingly similar groups of disenchanted Americans.

Though Trump has successfully syphoned off some traditional Republican supporters, the majority of his support base is comprised of a very particular kind of Democrat.

Research conducted by Civis Analytics and reported by the New York Times confirmed what I’ve long suspected about much of the hard-core Trump support base — they’re Democrats who don’t vote. 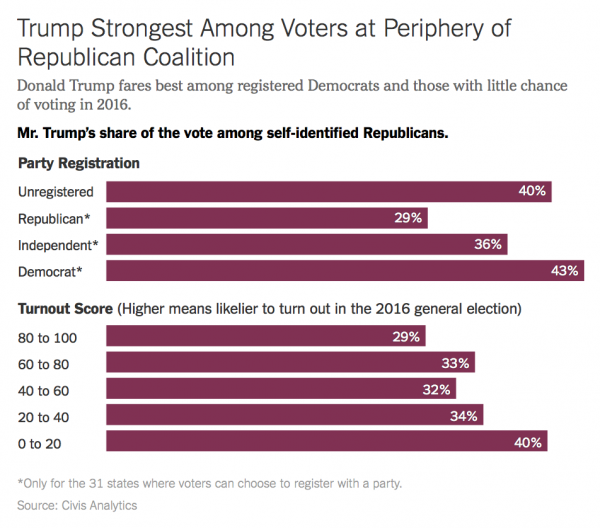 Reporting from a Trump event on Sanders’ home turf Thursday, the New York Times visited with rally participants and observers. Granite state natives (at least those in this setting) didn’t seem to mind that their top two candidates bore two different party affiliations:

Those bundled up outside just wanted to see the billionaire businessman in the flesh. Surprisingly, some were fans of both Mr. Trump and Mr. Sanders, the Vermont senator seeking the Democratic nomination, and were trying to decide which one to back.

“I think he’s smart, and he has the best chance of winning support and maybe flipping the state,” Daniel Nadeau, 22, of St. Albans, Vt., said of Mr. Trump. “Bernie is my No. 1 choice, and Trump is No. 2. They’re not that different.”

Voters who were on the fence between the seemingly polar-opposite candidates said that both communicated well with working-class people and made strong cases for how they would boost the economy, despite their differing policy ideas.

“I’m a Trump guy, but I do like Bernie,” said Peter Vincenzo, 59, who works installing hardwood floors and traveled from Ohio for the rally. “There are a lot of parallels between these two guys. There’s a populist appeal that comes with both of them.”

In August, Glenn Reynolds (aka Instapundit), referred to both Trump and Sanders as, “symptoms,” of the ruling class disease. Reynolds considered the rise of both as a rebellion of those who feel disenfranchised by anyone and everyone in elected office:

Trump’s rise is, like that of his Democratic counterpart Bernie Sanders, a sign that a large number of voters don’t feel represented by more mainstream politicians. On many issues, ranging from immigration reform, which many critics view as tantamount to open borders, to bailouts for bankers, the Republican and Democratic establishments agree, while a large number (quite possibly a majority) of Americans across the political spectrum feel otherwise. But when no “respectable” figure will push these views, then less-respectable figures such as Trump or Sanders (a lifelong socialist who once wrote that women dream of gang rape, and that cervical cancer results from too few orgasms) will arise to fill the need.

But Trump and Sanders are just symptoms. The real disease is in the ruling class that takes such important subjects out of political play, in its own interest.

Interview after interview with Sanders and Trump acolytes suggests they’re not concerned about the nitty gritty policy specifics; they’re angry from being ignored.

Strip away the party affiliations and laid bare is anger; pure (and arguably justified) angst. Trump and Sanders have smartly harnessed that anger and ridden it into national political prominence and now the fight for the title “Leader of the Frustrated” is well underway.

Are Legal Insurrection and Salon vying for the same readers?

Articles like this make you wonder, led by an intellectual vacuum-storm, with a smattering of Trump H8ting comments in the wake.

Up next on Tiger Beat LI: Are Marky-Marco Rubio and Jason Beiber the answer to our GOPe prayers? Add in Canada’s electoral votes, says the New York Times and the liberals at Civis Analytics and find out!

“Up next on Tiger Beat LI”

I’ve been waiting for some Rubio ‘boxers or briefs?’ or Rubio songlist schtick.

Hey Radegunda, who do you support?

I know it’s not fair, putting an imbecile on the spot, but