The fugitive is now back in custody 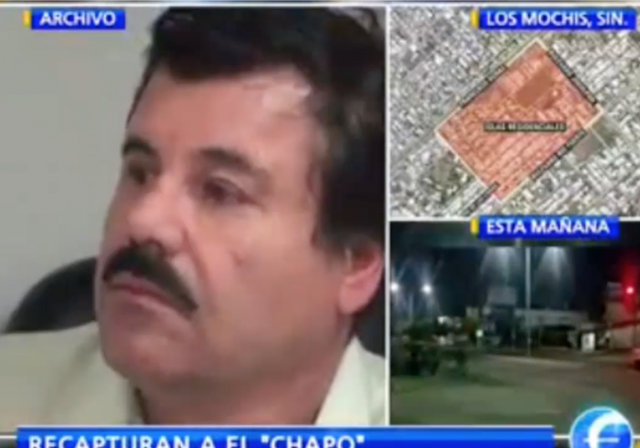 “Mission accomplished,” President Enrique Peña Nieto wrote on Twitter. “I want to inform the Mexicans that Joaquin Guzman has been captured.”
The news was an immediate boost to Peña Nieto, who has struggled with corruption scandals, drug violence and the humiliation of the escape by Mexico’s most famous prisoner, who burrowed to freedom last year.

It was not immediately clear whether Mexico would try again to hold Guzman behind bars or extradite him to the United States.

El Chapo escaped from a maximum-security prison in July and has been on the run these last seven months.

Since the billionaire drug lord escaped through a hole cut in his prison shower stall last July and exited through a mile-long tunnel, he has grown into a fugitive of epic proportions. He has broken out of Mexican prison twice in the past two decades and seemed capable of outwitting authorities at every turn. During his latest period on the lam, there were only sporadic reports of his whereabouts, including rumors that he had injured his leg fleeing one of many military operations to find him.

The arrest confirmed what many Chapo-watchers assumed, that he wouldn’t flee Mexico but return to his home state, where he enjoyed protection from residents, corrupt local police, and his extensive cartel network. Up in the remote Sierra Madre mountains of eastern Sinaloa, checkered with plots of marijuana and opium poppy, residents have often praised Guzman for his largesse, which included giving them jobs and medical care even air-dropping bags of money from Cessnas into peasant villages.

But like the first time he was recaptured, in a 2014 raid on his condominium in the coastal beach resort city of Mazatlan, he was caught on the coast on Friday — this time in a two-story white house on a residential street of Los Mochis, with a palm tree out front, according to televised images. After the raid, in which five suspected gunmen were killed, authorities recovered four vehicles, two of them armored, plus at least nine guns and rocket propelled grenades, officials said.

On Friday morning, the euphoric news coursed through the Mexican government. Mexican officials said they expected a popularity boost for Peña Nieto, who suffered a massive embarrassment when Guzman escaped from the Altiplano prison.

“We are very happy,” said Aurelio Nuño, the secretary of education, who was Peña Nieto’s chief of staff when Guzman fled prison, in an interview. “This is an important step.”

The AP captured footage of the takedown:

Exclusive footage of El Chapo in about 8 months (also pictured: the jail they're going to put him in) pic.twitter.com/dCNUdm8Lyy

After El Chapo escaped from prison in July, Donald Trump threatened to, “kick his ass.” Trump reached out to the FBI when a man claiming to be El Chapo’s son threatened Trump via Tweet.

[Featured image a screen shot from this YouTube video]

Good. Now give him a nice, humane execution, or all this just spools up the re-run.

Oh, I guess the payoff money ran out, so he’s back inside till the next payoff when he flies the coop again. Or burrows out.

Whatever, it’s a money machine. Not that I blame the Mexican prison guards making peanuts who are offered massive bribes to look away or the cartel will kill all their families — truly, an offer that one cannot refuse.