Was it ever much of a threat? 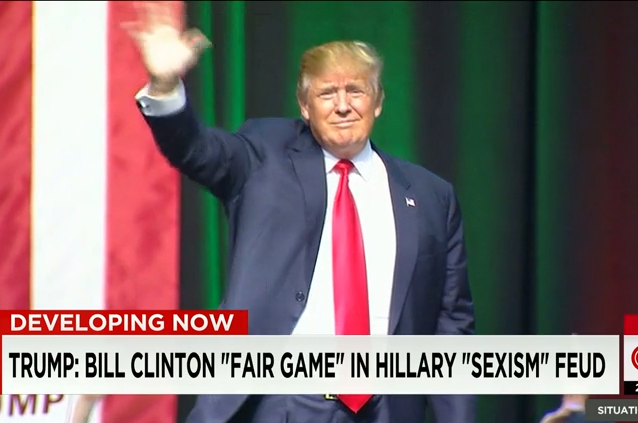 Bill Kristol, Founder and Editor of that mainstay of the Republican Establishment, The Weekly Standard, has finally come to recognize Donald Trump’s contribution to the Republican candidates as a group.

Kristol is not a Trump supporter and has predicted his fall for months.  After Trump derided John McCain’s heroism for merely being a POW for five-plus years, Kristol said, “he’s dead to me.”  In the same interview he opined, “I don’t think he’ll stay up in the polls, incidentally. Republican primary voters are pro-respect the military. And he showed disrespect for the military.”

In September, Kristol said on CNN, “I doubt I’d support Donald. I doubt I’d support the Democrat.” Instead, “I think I’d support getting someone good on the ballot as a third party candidate.”  In reporting Kristol’s comments, Salon referred to him as a “notorious neocon” and a “neocon prince.”

In October, Kristol went on MSNBC and said flatly “[h]e’s not going to win.”

Kristol apparently thinks, or thought, Trump’s nomination could be mortal for the Republican Party.  On December 20, he tweeted:

Crowd-sourcing: Name of the new party we’ll have to start if Trump wins the GOP nomination? Suggestions welcome at [email protected]

Kristol has acknowledged Trump’s positive impact at times.  Even when rejecting Trump for his attack on McCain, Kristol allowed that Trump “said some useful things, I think, and brought some people into the Republican tent.”

But Kristol seems now to be coming around to the position that Trump’s pluses outweigh his negatives.  In an interview with Newsmax TV on Wednesday, Kristol praised Trump’s handling of the Clintons.  According to Newsmax:

[Kristol said,] “It’s called attention to something that Republicans have tried for 15 years to call attention to and have really failed, which is that she’s complicit in his, Bill Clinton’s war on women and his mistreatment of women. . . .

“He sort of got that out there, Trump, when every other Republican has either been too timid or been too ineffective at doing so,” he added. “So you got to give Trump credit for that.”

Clearly, Kristol has been mulling over Trump’s impact on the race quite a bit, because his piece in the January 18 issue of the Weekly Standard expands on this theme of Trump’s drawing attention to key issues.  Titled “Thank You, Donald,” Kristol drives home the point he made to Newsmax – Trump has put Hillary Clinton and her husband squarely in the crosshairs.

As Kristol points out, even Bill Clinton’s former staffer Kirsten Powers conceded Trump’s impact, saying “[w]e are a society that has a blessedly lower tolerance for sexual assault and harassment than in prior years.  This is good news for America, but bad news for the Clintons.  History has caught up with them at the worst possible moment.”  Kristol continues:

History might have caught up with the Clintons without Trump’s help. But perhaps not. Perhaps History—or at least the admonitions of commentators—would in any case have led the GOP to focus in 2016 on appealing to middle America, and on speaking to and for the Silent Majority. But are we confident those admonitions would have had much effect without the urgent spur of the need to compete with Trump?

Kristol even goes so far as to disagree with those fretting that Trump has turned off more voters than he could have possibly attracted:

there’s simply no evidence the Trumpian interlude has hurt the GOP. The Republican party’s overall favorable rating hasn’t changed in these last six months. The percentage of Americans identifying as Republicans hasn’t declined. Obama’s approval rating hasn’t gone up. The Pew Research Center regularly asks which party would do a better job on the economy. In July, Democrats held a three-point edge; in December, Pew found Republicans leading by five. In the same Pew polls, Republicans improved from -2 to +2 on handling immigration and from +12 to +14 on handling terrorism.

But that doesn’t mean Kristol is suddenly on board with Trump.  He’s not:

Writing in mid-June, a couple of days after Donald Trump announced his candidacy, we offered the judgment that he should not be our next president: “We’re not Trump enthusiasts. We’re not even Trump fellow travelers. We’re closer to Trump deriders.”

And so we unapologetically remain. It would be ungracious not to acknowledge Trump’s remarkable standing in the polls six months later. But we see no reason to alter our conclusion that Donald Trump shouldn’t be president of the United States. Indeed, Trump’s behavior over this period has confirmed our judgment. If back in June we wrote that the rest of the presidential field could use “A Little Touch of Trump,” it’s fair to say that we’ve gotten more Trump than we bargained for.

Those who hate Kristol will spew their epithet of choice (GOPe! RINO! Cuckservative!) and dismiss this as a grudging hat-tip, groundwork for walking back his threat to back a third party or an effort to rein Trump in by co-opting him into the establishment itself.

But that’s missing the point.  Kristol is actually giving credit to the idea Prof. Jacobson wrote about when he said Trump has shifted the Overton Window enough to make ideas once at the extreme (or beyond) now now part of legitimate discourse.  That just doesn’t make Trump the best candidate or a good president.

Has the Overton Window shifted to a point where it’s fine for a presidential candidate to mock someone’s physical disability in a mimicking fashion, and then, when called on it, to claim implausibly that he had never seen the person?

Is it now fine for a presidential candidate to insinuate that his rivals are faking their religious devotion, on the grounds of where their parents came from?

No — unless that candidate is Donald the Great. The fandom forgives him for sins they would otherwise consider disqualifying. They’ll even call those sins virtues, but only when it’s Trump who commits them.

They certainly don’t ask for the kind of consistency they demand of all other candidates, nor do they demand any record of keeping pledges that aren’t self-serving. If someone reneged on a promise to support a young nephew with cerebral palsy, out of pique at the child’s parents (and there are reports that Trump did exactly that), why would he keep promises made to the rest of us in his quest for power? Isn’t it clear that Trump will do just about anything to make himself the winner?

The arguments made for why Trump would be more reliable and honorable than anyone else — “He’s not PC!” “He can’t be bought!” — are ludicrous.

Uh Huh. More BS from a state hackist. Who is your candidate?

Whomever Radegunda is flacking for in this election with his lies and distortions one thing is for sure, he obviously sees Trump as kicking his or her arse. And that is driving him crazy.

Those who hate Kristol will spew their epithet of choice (GOPe! RINO! Cuckservative!) and dismiss this as a grudging hat-tip…

What will those who hate Trump do, if he wins in Iowa and New Hampshire?

I suspect that there will be a Third Party regardless.

1) If the Whigs blatantly rig the convention to deny Cruz or Trump the nomination even if they come in with the most delegates, there will be a Third Party representing the Base. The Whigs know that this will mean a Democrat victory, but it means that they retain control of the rump Republican party. That is their primary goal.

2) If Cruz or Trump is the nominee, the Whigs will either form a Third Party or possibly just join the Democrats. This will guarantee a Democrat victory, but they figure that such would be preferable to Trump or Cruz.

3) If it does not happen during the campaign, and Trump or Cruz is the candidate AND WINS, the Whigs will likely form a Third Party to help the Democrats oppose the new president.

The Republican Party is a case where there is too much vertical distance between what passes for leadership, and those they claim to represent and don’t. In naval architecture, this distance, from top to bottom and the relative weights are called Metacentric Height. Too great a Metacentric Height means a capsize under any stress.