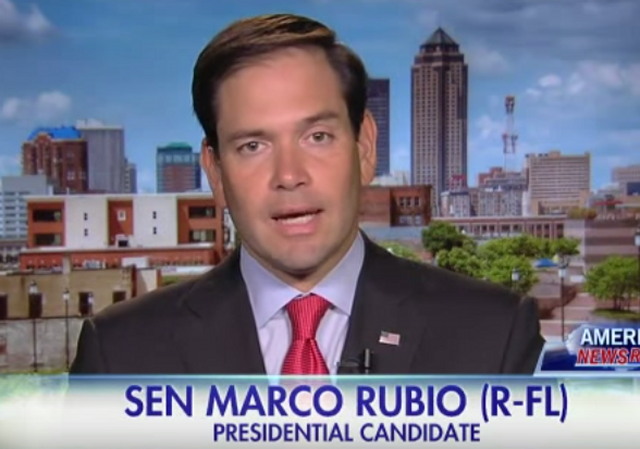 According to Black, the Republicans have an advantage in the general election, whoever wins the nomination:

a party has won three consecutive presidential elections only when the incumbent was very popular at the end of the second term or when there were unusual encumbrances to a change.

It is fair to say that Barack Obama is not very popular.  According to Gallup, his approval rating is below average for President entering their eighth year in office.  “Unusual encumbrances to a change” is an awkward formulation, but there is nothing obvious at present.  So Black gives the nod to the Republicans.

But why Rubio?  After all, Donald Trump still leads most polls, even if Rubio and even more so Ted Cruz have gained ground.  According to Black:

I think Cruz will win in Iowa, and Trump will win in New Hampshire. But then the race will narrow sharply and if Trump does not become more specific and more acceptable to the large group of moderates who find him offensive (but are about as irritated as I am by attempts to portray him as a Nazi), he will then start to slide, and I think that Mr. Rubio will win over Messrs. Trump, Bush, and Cruz in Florida and ease in ahead, even if the candidates who have won earlier contests before, such as Messrs. Bush and Cruz, have to deliver him blocs of delegates to put him across over Trump.

There are some problems here.  Trump has tapped into a genuine anti-establishment fervor, and Rubio’s projected reliance on Bush and Cruz’s donated delegates would not sit well.  The obvious rejoinder is that Rubio rose politically by being non-establishment.  According to David French:

Perhaps most momentous of all [in the 2010 Tea Party revolution], it was the year of Marco Rubio, who overcame long odds to beat Charlie Crist, a man who’s since proven himself to be exactly the kind of soulless politician the tea party exists to oppose. Since his election, Rubio has delivered, becoming one of the most consistent and eloquent conservatives in the Senate. My colleague, Jim Geraghty, has outlined his stratospheric ratings from the American Conservative Union, National Rifle Association, National Right to Life, and the Family Research Council.

French argues that the recent attack on Rubio for being “Establishment” is part electioneering ruse, part dissimulation and part (hopefully) simple misunderstanding:

Here’s the reality: In the battle — launched in 2010 — between the tea party and traditional GOP powers, the tea party largely won. The contest between Rubio, Cruz, and Trump is a fight between Tea Party 1.0, Tea Party 2.0, and classic American populism. And each one of these candidates would need traditional Republican or “establishment” support in the general election.

On immigration, French notes that Rubio has followed more or less the same path Trump did.

Complaints about his stint with the Gang of Eight are sure to persist, though, and it’s not at all clear that Rubio can move right on immigration (where primary voters want him) without losing credibility.  Still, in a Rubio/Trump match-up, Rubio should be able to convey that there is little difference between their respective paths on immigration and, looking at their records as a whole, Rubio’s conservative credentials far outstrip Trump’s.

So what about the threat of a contested or brokered convention, or Trump running a third-party spoiler campaign?  Again, according to Black, it’s not going to happen:

As most of Mr. Trump’s views, apart from a couple of areas of immigration and law enforcement, are quite moderate, there is plenty of room to adopt much of his platform on behalf of a largely united party. Mr. Trump would receive considerable deference, and the level of his support entitles him to it; he will not do anything that would assist Hillary back into the White House and the idea that he would spend a billion dollars of his own money to win the Ross Perot Prize as a useful idiot for the Clintons was a figment of the febrile and wishful imaginations of CNN and the New York Times.

Black’s dismissal of a Trump insurgency may also be a touch optimistic.  Trump has enough money, confidence and ego to endure a bruising convention, a kamikaze third-party run, or both.  Neither is it obvious that he loathes the Clintons.

Nevertheless, if there is a the path to the Rubio Administration, it might look like this:  Win the nomination as an original Tea Party champion with bona fides as good as or better than any Republican in the race and weathering a storm on immigration; capitalize on Obama’s lackluster approval and Clinton/Sanders’s numerous problems in the general.  Now all he needs to do is get the votes.

Have to say, I could only manage to skim the post after that whopper. “Non-establishment?” Give me a break.