Updates as they occur 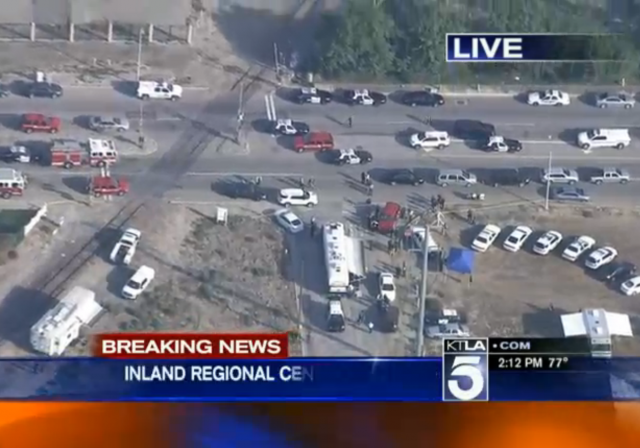 A shooting spree in San Bernardino resulted in the murder of at least fourteen, according to initial reports. Latest reports indicate up to 14 others were wounded and currently receiving medical treatment.

Local live updates are here. Local law enforcement indicated they will provide hourly updates which you can also watch here:

Federal authorities are also involved in the investigation.

The hunt for one to three suspects was taking place near a San Bernardino, California, center for people with developmental disabilities, where at least 14 people were killed Wednesday, Police Chief Jarrod Burguan told reporters.

Fourteen other people were wounded in the shooting, Burguan said.

SWAT teams and the bomb squad were working to clear the buildings where the shootings took place.

• The shootings were in the conference center at the Inland Regional Center, the center’s executive director, Lavinia Johnson, told CNN. She believes the county’s Department of Public Health was having a holiday party there. Johnson said the fire alarm went off in her building, and people began to evacuate but then the order came to stay in place. Later police came and took people out of their offices.

Sheriff: Mass shooting can most likely be described as 'Domestic terrorist situation' #massshooting

We’ve curated a Twitter feed with live updates as well:

As usual, the left isn’t even waiting for the bodies to cool before they express outrage at the thought of citizens being able to defend themselves. Imagine that, their response to a captive audience being turned into targets is to demand more gun control on the backs of the law abiding. As if California isn’t restrictive enough.

Just got a major update on the shooting. Two suspects are dead. One male and one female. At the new presser, the FBI said that terrorism is suspected, but not confirmed. The SUV is now being searched for IEDs and other lethal devices. The area lockdown has been lifted.

The other suspect is now in custody in the San Bernardino County jail.

You know damn well they’re Middle Eastern because the LEO has not said they were white or black. Two are dead so they know who they are. When was the last mass murder involving more than one person? They are getting their story together to tell all us right wingers not to “over-react”.

Just a bet – they’re uh, members of the peaceful religion…

Yea, one news outlet is already reporting that the gun men said nothing before they opened fire, which meant no “all to the snack bar” battle cry. Of course that means that they can’t be, of the “Religion of Peace”.

Lotsa talk about how the FBI has names, and the names create a “delicate” situation….. 6:30 pm pst. But they were very definite to say that one of the dead was an American citizen.

They are not ruling out terrorism, and not revealing names with implications.