Ban would include all Muslim immigrants and tourists, and even Muslim-Americans currently abroad 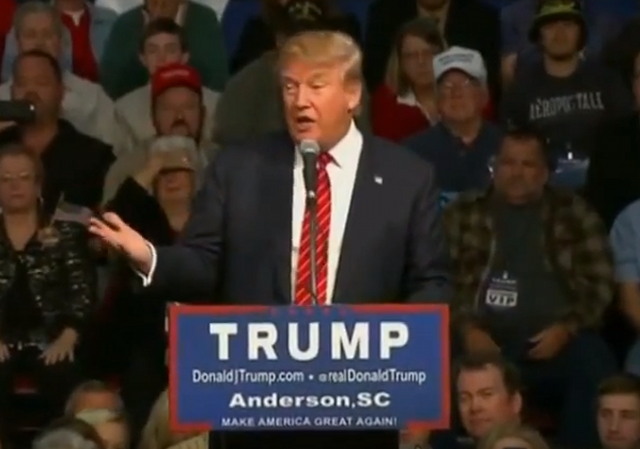 Presidential candidate Donald Trump sucked up all the media oxygen yet again on Monday when his campaign released a statement calling for “a total and complete shutdown of Muslims entering the United States until our country’s representatives can figure out what is going on.”

Many on Twitter assumed at first that the statement was a hoax, but it was tweeted by Trump senior adviser Dan Scavino, and then posted on Trump’s website and retweeted by Trump himself, who called it “a very important policy statement on the extraordinary influx of hatred & danger coming into our country.”

Trump campaign manager Corey Lewandowski confirmed to the Associated Press that the intention was for the ban to apply to “everybody,” including both immigrants and tourists. The Hill asked Trump spokeswoman Hope Hicks if this would include Muslim-American citizens who were currently abroad, Hicks replied by email: “Mr. Trump says ‘everyone.'”

Memo to Kareem Abdul Jabbar, make sure you don't leave the country after Trump inauguration. You might not get back in.

Trump also retweeted several tweets from David Brody with the Christian Broadcasting Network that described his proposed Muslim ban as an act of “bravery” that would likely “give him a boost with evangelicals.”

Expect the @realDonaldTrump statement on USA Muslim ban to give him a boost with evangelicals.

Here is the truth whether you like it or not:@realDonaldTrump is only candidate to have the bravery to put out that statement on Muslims

Most were far less supportive of Trump’s idea, with immediate criticism coming from all across the political spectrum denouncing the idea as extreme, even fascist. “One has to wonder what Donald Trump will say next as he ramps up his anti-Muslim bigotry,” Ibrahim Hooper, national communications director at the Council on American-Islamic Relations told the Washington Post. “Where is there left for him to go? Are we talking internment camps? Are we talking the final solution to the Muslim question? I feel like I’m back in the 1930s.” Politico’s Marc Caputo tweeted that the statement was likely to encourage Stormfronters, referring to the white supremacist website.

Forget dog whistles. This is a dinner bell for anti-Muslim bigots. And the Stormfronters are hungry pic.twitter.com/tJsLdGzKM0

Most of Trump’s competitors in the Republican presidential primary immediately condemned his proposal.

Donald Trump is unhinged. His "policy" proposals are not serious.

I disagree with Donald Trump’s latest proposal. His habit of making offensive and outlandish statements will not bring Americans together. The next President better be somebody who can unite our country to face the great challenges of the 21st Century.

Gov. Chris Christie (R-NJ) told talk radio host Michael Medved that Trump’s idea was “the kind of thing that people say when they have no experience and don’t know what they’re talking about.” Continued Christie: “We do not need to endorse that type of activity, nor should we. What we need to do is to increase our intelligence capabilities and activity both around the world and in the homeland…We need to cooperate with peaceful Muslim Americans, who want to give us intelligence against those who are radicalized.”

Ben Carson also rejected Trump’s proposal. Carson’s communication manager Doug Watts told The Daily Beast that while all foreign visitors did need to register under existing visa laws before entering the country, “We do not and would not advocate being selective on one’s religion.”

On the other hand, both Sen. Ted Cruz (R-TX) and Sen. Rand Paul (R-KY) would only support limited bans based on the risk of the country of origin. In a statement posted Sunday on his campaign website, Cruz called for “an immediate moratorium on refugees from countries with a significant al Qaeda or ISIS presence.”

Earlier Monday, Paul voiced his support for a restriction on immigration from Middle Eastern countries, in an appearance on Fox Business, according to a tweet by The Intelligence Report host Trish Regan that Paul retweeted:

When pressed for clarification by The Daily Beast’s Olivia Nuzzi, the Paul campaign released a statement touting his national security credentials:

Asked Rand Paul's campaign for a response to Trump's proposal. This is all they had to say: pic.twitter.com/wHRVrHgolg

(New York, NY) December 7th, 2015, — Donald J. Trump is calling for a total and complete shutdown of Muslims entering the United States until our country’s representatives can figure out what is going on. According to Pew Research, among others, there is great hatred towards Americans by large segments of the Muslim population. Most recently, a poll from the Center for Security Policy released data showing “25% of those polled agreed that violence against Americans here in the United States is justified as a part of the global jihad” and 51% of those polled, “agreed that Muslims in America should have the choice of being governed according to Shariah.” Shariah authorizes such atrocities as murder against non-believers who won’t convert, beheadings and more unthinkable acts that pose great harm to Americans, especially women.

Mr. Trump stated, “Without looking at the various polling data, it is obvious to anybody the hatred is beyond comprehension. Where this hatred comes from and why we will have to determine. Until we are able to determine and understand this problem and the dangerous threat it poses, our country cannot be the victims of horrendous attacks by people that believe only in Jihad, and have no sense of reason or respect for human life. If I win the election for President, we are going to Make America Great Again.” – Donald J. Trump

(added by WAJ) Trump also appeared on Greta to reiterate his position:

This post has been updated to include a statement from Sen. Marco Rubio, to clarify Sen. Ted Cruz and Sen. Rand Paul’s reactions, to add Trump’s appearance on Greta, and for brevity.

Poor rags, with all your proclamations that Cruz would not have anything to do with trump:

Maybe A President Donald would hire Cruz as AG. Maybe Cruz would accept.

Cruz also said he would hire Trump to build the WALL.

Cruz is a crafty politician. Just not the LEADER that Trump is. But if he studies under Trump for 4 to 8 years he could learn to be a better leader. Not there yet compared to Mr. Trump.

Cruz has shown more savvy and leadership in this campaign than the vast majority of the other candidates. He seems to understand that the most idiotic thing you could possibly do at this point is dismiss Trump and insult his supporters. If Trump flames out, his supporters aren’t going to enthusiastically line up behind someone who spent months attacking him.

I said I don’t believe Cruz would serve in any T-rump administration.

Hell, I’d hire T-rump if I needed a snake-oil salesman!

I’m a capitalist. I’ll hire almost anyone who can make me more money than they’re paid. Even you could mow my grass.

…maybe. Not sure your smart enough…

“I said I don’t believe Cruz would serve in any T-rump administration.”

You are entitled to that opinion. Based upon the evidence, you’re just wrong.

I agree with this approach.

I like this proposal. Islam is a choice. The Koran says that they have to kill us. And they will kill you if you deface a Koran. Don’t give me that “people of the book” stuff, because that is abrogated (obsoleted by later teachings). The latest and current command is to kill the men and rape the women. Why wouldn’t we ban someone who has an attitude like that?

” . . . CARTER BANNED IRANIANS FROM COMING TO US DURING HOSTAGE CRISIS:

Interestingly enough, Carter did this by invoking the Nationality Act of 1952. A law originally opposed by Democrats for its attempt to restrict Communist immigration to the United States . . . ”