Does Putin see a kindred spirit . . . or something else? 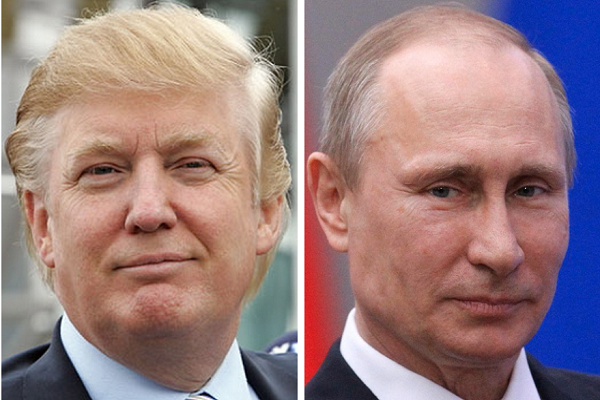 While I didn’t think Donald Trump did a particularly great job in Tuesday’s CNN debate, his poll numbers and recent comment about a temporary halt to Muslims coming into the country have stirred interest in his candidacy abroad.  The latest foreign leader to weigh in on Trump is Russian president Vladimir Putin who thinks Trump is “brilliant,” “talented,” and “very colorful.”

Russian President Vladimir Putin had kind words for his “stablemate” Donald Trump during an annual end-of-the-year Q-and-A session in Moscow.

“He’s a really brilliant and talented person, without any doubt,” Putin told reporters, according to a translation by Interfax. “It’s not our job to judge his qualities, that’s a job for American voters, but he’s the absolute leader in the presidential race.”

Putin claims that Trump was the “absolute leader” in the GOP presidential debates.

Setting aside someone like Putin calling anyone else very colorful (remember the Russian lawmaker who wanted to mail Russian women Putin’s sperm to create a military and political elite class?), Putin’s interest in Trump is largely due to Trump’s openness to offering Putin’s Russia a seat at the table.

[Putin] added: “He wants to move to a different level of relations, to more solid, deeper relations with Russia. And how can Russia not welcome that? We welcome that.”

Despite the apparent character recommendation, Putin did, however, seem to question Trump’s populist methods and often inflammatory statements.

“As for his internal political issues and his turns of speech which he uses to raise his popularity, I repeat, it’s not our job to judge them,” Putin said.

In some ways, Trump’s insistence that he can repair U. S. relations with Russia is reminiscent of the similar Obama-Hillary “restart” disaster and to Obama’s insistence during his 2008 presidential campaign that he would “sit down” without precondition with, among other questionable rogue states and assorted dictatorships, Iran.

For their part, Russian scholars and media are already speculating about what a Trump presidency would mean for Russia.

According to Ivan Kurilla, a professor at the European University in St. Petersburg, the truth is that what Trump says about Putin is actually directed at Obama.

“While Russia has become an apparent failure for the Obama administration, Trump says that he can deal with Putin, just like during the last election when Obama was proud of the ‘reset’ in the U.S.-Russian relationship and Mitt Romney was calling Russia the main geopolitical foe. He was doing it in order to criticize the White House, not Russia,” Kurilla said in written comments.

. . . . Trump has promised that he will impose harder sanctions on Iran in order to make a deal “from strength,” meaning that Iran’s oil will not hit the market, increasing the chances that the price of oil — Russia’s main export — will go up.

In addition, Trump said he would want to put more pressure on China, including an imposition of a tariff on its exports into the U.S.. This could empower Russia in the eyes of the Chinese leadership and drive the two closer together.

Putin, however, is no pushover, and it wouldn’t be long—warns a Russian columnist—before Trump realized that Putin is mocking and manipulating him.

Russian columnist for Bloomberg View Leonid Bershidsky has compared Trump with “brash, showy businessmen,” and Yevgeny Chichvarkin and Boris Berezovsky in particular. The two fled Russia for London in order to avoid what they said was politically motivated criminal prosecution at home. Putin eats such people “for lunch,” according to Bershidsky.

“Eventually, however, even Trump would come to understand that he was being mocked and manipulated, the Putin behavior that Obama can’t stand. Trump’s disappointment might produce an even more bitter confrontation than the one between Putin and Obama,” Bershidsky wrote in a column published at the end of July.

This is a Russian newspaper, of course and an English language one at that, so take with the usual grain (or two) of salt.  It is interesting, however, that Putin was so effusive in his praise of The Donald, and it’s hard not to wonder if he sees a kindred alpha male spirit  . . . or someone whom he could easily manipulate.

[Featured image via The Business Insider]

I’d like to avoid all the sniping going on, and observe Trump may have something of a point.

At least it has occurred to me that we have more in common with Russia than China, and share mutual concerns. Those two countries are no longer strategic allies in the Third International, and China is beginning to steal Russia’s lunch in terms of IP theft.

It is typically asserted that Trump’s rise is the product of the Republican party’s rank unpopularity among its traditional electoral base. “Of course the voters are rebelling,” the argument goes. “For years now, the GOP has overpromised and under-delivered; it has failed to do anything substantive on immigration; it has been too keen to cozy up to its donors. And then along comes this guy, and provides an outlet. What did you think was going to happen?”

Evidently, there is something to this critique. But it is not the catch-all excuse that some believe it to be, and nor does it justify the extent to which many Americans are happy to indulge the man. It cannot explain, for example, why Trump’s obvious lack of interest in liberty and limited government is so steadfastly ignored by his apologists. It cannot explain why his open hostility to the Constitution is met with equanimity. And it most definitely cannot explain why, as I write, thousand of his fans are running around justifying Trump’s admission that he admires Vladimir Putin.

Just a few hours ago, Trump confessed exactly that. He was not caught in a “gotcha.” He was not misquoted. He was not led down the garden path by the “liberal” or “mainstream” or “pro-Obama” media. Rather, he said, as plain as day, that he has “always felt fine about Putin”; he called him “strong” and a “powerful leader”; and he suggested that he should be respected for his “popularity within his country.” Nothing could prise him from this reverence. When it was pointed out to him that Putin is a man who “kills journalists, political opponents, and invades countries,” Trump said flatly, “At least he’s a leader,” which I can only imagine sounds an awful lot better in the original German. Then, for good measure, he took aim at the American system: “Unlike,” he added, “what we have in this country.”

Nobody except unthinking hacks listen to or repeat these DC establishment media attacks anymore. They have no credibility. Every republican candidate since Reagan has been called hitler and a wild maniac that can’t be alliwed to be commander in chief. They did it to Reagan, not bush cause he was one of them, Buchannan, and they are doing it with Trump and will do it against Cruz too.

Nobody believes these hacks who always cry wolf.

We all note the lack of any intelligent response to actual facts and argument.

All Gari (the lying SOS) has is ad hominem. Which neatly tell the tale!

LOL. This from the guy who posts nothing but childish name calling and homophobic slurs 80% of the time.

You are such a moron you don’t even know what ad hominem attack means. Psst there is no ad hominem attack on anyone in my pist above. You just copy stuff from my posts when I object to your content free homophobic posts without even knowing what it means.