Was this Jeb’s last hurrah? 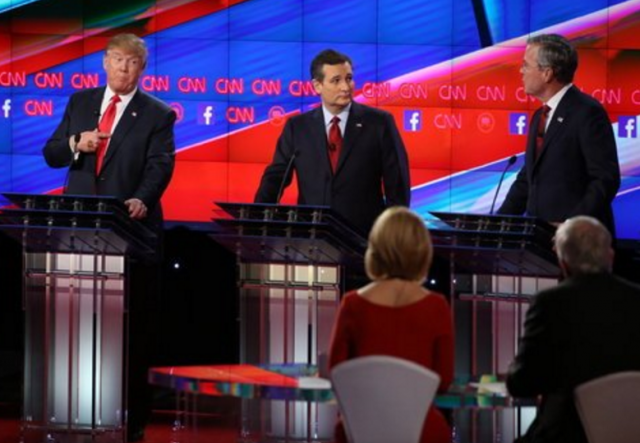 The CNN Debate just ended, and I have only one clear impression — Donald Trump has so completely emasculated Jeb Bush that this may be Jeb’s last hurrah.

Before getting to that, I don’t think there was a clear winner. Trump was Trump; I don’t think he gained or lost support based on this performance. He reiterated his pledge not to run independent, clearly and unequivocally.

Rubio was very good … except that for the first time people (particularly Rand Paul) hit him over the head hard on the Gang of 8 bill. I thought Cruz had some strong moments, but I just don’t know that this will catapult him. Of the others, the only one who made any impression was Carly Fiorina, when she went after Hillary; but she played the gender card pretty hard, so I don’t know if that turned people off.

Donald Trump has mastered the art of making Jeb look small. Even when Jeb scores a substantive point about Trump, Jeb lessens his own stature for the fight after Trump mocks him.

Here is an exchange that some Jeb supporters tweeted out as supposedly Kaboom! on Trump. The issue was Trump’s statement that he would “take out” the families of terrorists as a deterrent. Substantively, Jeb was fine.

Here’s another one. They both seemed childish. That hurts Jeb, not Trump.

Trump is kryptonite to Jeb Bush.

Whether it’s “fair” or not is irrelevant.

By the numbers: if a strong American economy is desirable (leading to strength across the board) stats are telling as to just whom is suited to produce results

The biggest ad spenders so far (for TV and radio):

Team Kasich: $8.8 million (all from two outside groups)

Team Sanders: $7.2 million (all from campaign)

Team Fiorina: $1.0 million (all from CARLY For America Super PAC)

The attitude that a candidate Trump has, is very unusual . I think it is just the kind of President that we need at this moment in time. We have a pres. who hates America, and is without a doubt, trying to destroy us. We don’t need another Dictator/Queen, to trash our Constitution and break the laws that He/She doesn’t like. We can’t survive another Marxist/Communist Regime.We need someone who wants to instill America’s values. We have had people in charge that wants to kill all Tradition. They try to trash all hero’s or Famous Builders of the Country. We have a chance to have a leader, who is not a member of the ” Good ole Boys Club.” He doesn’t have obligations to appoint incompetent people in Gov. Jobs. Many of the ” Takers,” are very nervous.

We don’t need another Dictator/Queen, to trash our Constitution and break the laws that He/She doesn’t like.

So that counts Trump out.

“So that counts Trump out.”

Laughing. It’s pretty clear that Trump, Cruz, and Carson have reached an understanding.

My official prediction. Subject to change of course…

Duh Donald (aka Hooting Monkey) seems to misunderstand the whole concept of “republican democracy”, along with the whole notion of “constitution”.

Click Rags link and listen for yourself. Then you will understand the distortion applied by TDS sufferers to any and all things trump.

“One of the first things I’d do in terms of executive order, if I win, will be to sign a strong, strong statement that would go out to the country…”

We have our disagreements with respect to trump. The headline “Trump: As president, I will mandate the death penalty for anyone who kills a police officer” which is not the way I read his actual words. The actual words say he will, in “terms” of an executive order, sign a strong “statement” for the death penalty.

I think the headline twists that quite a bit.

I think he was very clear, and so did his campaign, and you’re the one with TDS.

Of course you do. Your night job is work in a pretzel factory.

If you listen in context, consider the group he is speaking to, it doesn’t mean what you think it means.

Sure it does, and you are happily lying to yourself.

It meant what he said, and what his campaign said.

Was this Jeb’s last hurrah?

Let’s hope so. I didn’t thing anyone could make Trump look presidential – I swear, Bush did. That was so unnecessary and childish.

His last “hurrah” was some time ago. He just doesn’t know it. A smarter guy would have recognized it’s over by now. Jeb! just ain’t smart.

Conservatives aren’t worried about whether Trump can check every box on the Edmund Burke list of conservative bona fides. He gets important stuff, like controlling immigration, fighting terrorism and avoiding bad trade deals. Those issues resonate, and he knows it.

What conservatives know is that the country’s situation has grown so dire in so many areas that only a personality with steel, vigor, determination and even ruthlessness can possibly make things right. Getting every detail correct — but not having the stamina or forcefulness to carry out the plan — won’t cut it.

But, Gari, you lying SOS, you are not a “conservative”.

You’ve openly declared “this election is not about conservative principles”, and for you that’s true.

You are simply an Obamic supporter of a slightly different stripe. You want a strong man of YOUR persuasion.

Conservatives want a Constitution, and a man or woman who will honor it and lead from it. T-rump is NOT that person, as you’ve admitted, along with the fact that you don’t care.

At least be SLIGHTLY honest.

Your bullshit is so repetitive and boring.

Without borders, a wall on the border and enforcement of our immigration laws we don’t have a country and the constitution becomes just a piece of paper.

Trump gets that. There is no more important issue.

“…the country’s situation has grown so dire in so many areas that only a personality with steel, vigor, determination and even ruthlessness can possibly make things right. Getting every detail correct — but not having the stamina or forcefulness to carry out the plan — won’t cut it.”

See, these are exactly the sentiments of a good lil’ Brown Shirt or Black Shirt. Along with your slavering man-crush on a narcissist with delusions of grandeur.

Not those of an American conservative.

Putin thinks Trump would improve relations with Russia and is talented and outstanding.

“He is a very outstanding man, unquestionably talented,” Putin told journalists after his annual press conference in Moscow.

Demonstrating…again…your lack of judgment and height of stupidity.

LOL. Yeah because improving relations with t g e 2nd largest nuclear power in the world is such a bad thing…

This from the guy who defends those who want to start world war 3 with a stupid after it is way too late Syruan no fly zone.

Your infantile stupidity knows no bounds.

Putin is certainly a KGB master. An “endorsement” of trump could be seen as something else entirely.

Not an endorsement but a show of respect. One can have respect or not for one’s adversaries. Putin has respect for Mr. Trump, certainly has none for Obama.

Using your theory of things then Obama must be Putin’s worst nightmare because he never says anything good about Obama. Or maybe you have inadvertently once again shown just how shallow and superficial is your thinking.

Since you Rags don have any I can understand why it is a concept you don’t understand and are so confused.

Gee, now if he can get the endorsement of the ChiComs and the mullahs in Iran, he’ll have a LOCK on the nomination…!!!

Mr. Trump absolutely will get the respect of the Chinese and the Mullahs in Iran. Just like Reagan had their respect. The fact that Mr. Trump has this and several other things in common with Reagan is a good thing. It prevents wars and mistakes in judgment.

Rags likes it better if our adversaries have no respect for our President. I guess he prefers a president that has things in common with Obama as opposed to Reagan.

Not very conservative or thoughtful on Rags part, but his posts continually show that he is all about infantile bluster and thoughtfulness has nothing to do with his thinking.