Ohio Secretary of State: Trump Can’t Run as an Independent in Ohio

Ohio Secretary of State: Trump Can’t Run as an Independent in Ohio 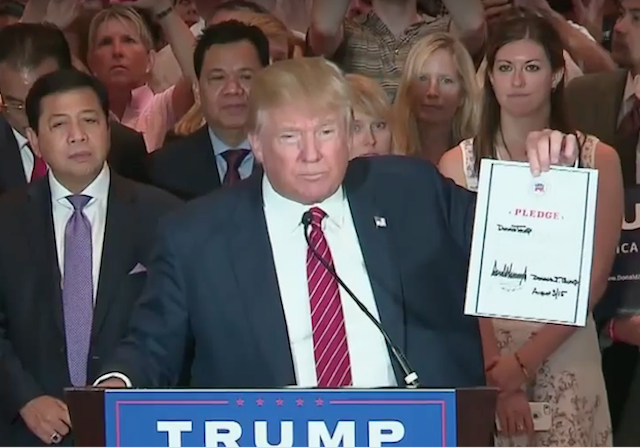 Both Donald Trump and Ben Carson have stated that if the GOP attempts to manipulate the primary process they will run as independents.

According to the Columbus Dispatch, March is the latest that they can launch independent runs.

State filing deadlines would give the two Republicans until about March to launch independent or third-party campaigns, experts said. That would give a well-financed campaign enough time to gather sufficient signatures on petitions so the candidate could appear on the ballot in every state.

Starting in summer would be too late.

“Ross Perot in 1992 didn’t start petitioning until March,” said Richard Winger, editor of Ballot Access News. “He was on the ballot in every state.”

And we all remember how that turned out.

Anyway, it’s not an easy task to get on the ballot in all fifty states.  The Columbus Dispatch continues:

Launching an independent campaign for president isn’t as simple as holding a news conference and coming up with a catchy name for your new political party.

States have set up a legal maze of different deadlines and requirements that makes it challenging for even well-funded campaigns to get on the ballot in every state.

In Texas, independent candidates must gather signatures from 79,939 registered voters by May 9. They can’t start gathering the signatures until after

March 1, the date of the Democratic and Republican presidential primaries in that state.

And all of the signatures must come from voters who did not vote in either party’s primary.

Winger said he has charted the easiest path to get on the ballot in all 50 states and the District of Columbia —forming a minor political party in some states and running as an independent in others.

In all, he says, the candidate would need support from about 600,000 voters across the country to get on all ballots.

However, there may be a problem . . . at least in Ohio.  According to the Ohio secretary of state, Trump can’t run as an independent in Ohio because he just filed on Friday to run as a Republican in that state.

Donald Trump filed Friday to run as a Republican presidential candidate in Ohio, meaning that he now cannot run as an independent in the state next year, according to Secretary of State Jon Husted’s office.

. . . . Trump has repeatedly said he might run as an independent or third-party candidate if he’s not treated “fairly” by the Republican establishment.

But under the Ohio Revised Code and case law, any independent presidential candidate running in the state must first disaffiliate with any political party “in good faith.”

“Since Donald Trump has filed a declaration of candidacy with our office as a Republican, has filed with Federal Election Commission as a Republican candidate and voluntarily took part in the Republican presidential debates, the first of which was held in Ohio, there is no way for Mr. Trump to disaffiliate from the Republican Party ‘in good faith’ during this election cycle,” said Husted spokesman Joshua Eck in an email.

So it all comes down to “good faith.”  Or does it?

According to an elections law expert, a ruling by SCOTUS has upheld the right of an Independent to run as a presidential candidate on the Ohio ballot.

However, Dan Tokaji, an Ohio State University law professor specializing in election law, said Husted’s interpretation of the law is contradicted by a 1983 U.S. Supreme Court ruling on a case from Ohio.

In that case, Republican-turned-independent presidential candidate John Anderson was blocked from the 1980 Ohio general election ballot because he missed a statutory deadline to register as an independent candidate. The Supreme Court ruled 5-4 that Ohio’s early filing deadline was unconstitutional.

Husted’s office would keep Trump from running as an independent for a slightly different reason, “but it seems to me it’s the same principle” as the Anderson case, Tokaji said.

Trump is currently enjoying his highest yet national poll numbers, but if those start to fall . . . who knows?  Will he or won’t he?

If Trump just loses the primaries. If someone else just beats him out, then this all goes away. Even if Trump tries to run as a third party candidate his support will wither away to below 10% if that.

If Trump “wins” in the sense that he is the clear choice of the populace– not by 1% but say 10%, but rule manipulations give the nomination to someone else. It will be the end of the Republican Party.

I also see Trump running as a third party candidate if it is clear that the power structure screwed him out of the nomination. It raises some interesting problems.

What if state X has a rule that a presidential candidate has to submit a petition with so many signatures before the write in votes for him can be counted. What if Trump gets 60% of the vote in state X but does not manage to file such a petition?

Now imagine you are an elector. Electors tend to be party officials of some sort. In your state the vote goes 60% Trump, 30% Hillary, 10%
republican candidate. Do you cast your vote for Trump or the Republican candidate?

Imagine the same thing if you are a member of the House and the same vote total applies to your district. What do you do if the
election gets thrown into the House?

All of this would make great fodder for some young writer.

The thing is that all this manipulation of the rules can cause a problem. A person engaging in this sort of manipulation will likely find themselves in a great deal of trouble. Just a like a “barracks lawyer” in the military.

As of yesterday, Kasich was not on the ballot in Ohio.