Would immigration activists exploit children to attack Trump? You Betcha.

Would immigration activists exploit children to attack Trump? You Betcha.

“Eff you, racist eff!” — The Children 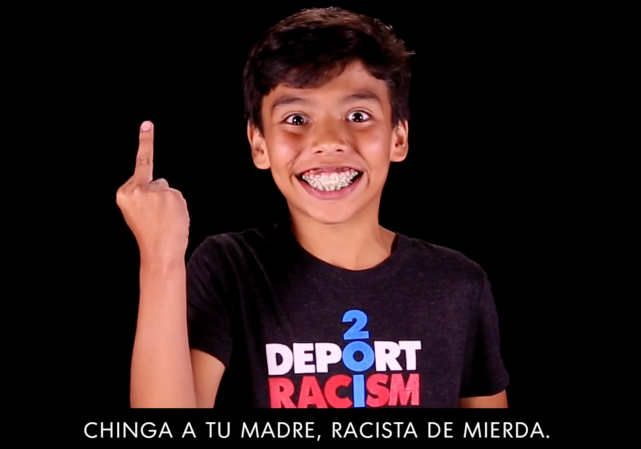 “For the children” unless using children as profane props helps your cause, in which case, eff it. Or at least that seems to be the case with a presumably anti-Trump PAC, Deport Racism.

Promoting their contest which offers a cash prize to any audience member who successfully disrupts Trump’s upcoming Saturday Night Live appearance by shouting “deport racism” or calling Trump a racist, Deport Racism used children to share, a “few words of their own” with The Donald. Mainly, “f*ck you, racist F*ck!”

The group says on its website that allowing Trump to host the famed comedy program “sends the wrong message that his offensive and racist comments about Latinos and Mexicans are acceptable.”

When Trump launched his campaign for the GOP nomination in June, he called Mexicans “rapists” and accused immigrants from the country of “bringing crime” and drugs into the US. Trump has vowed to build a giant wall on the US-Mexico border if he is elected president, and claims he will find a way to make the Mexican government pay for it. The real estate mogul and former reality TV star also says he would deport the estimated 11 million undocumented immigrants that currently live in the US.

“We’re hoping the $5,000 will help people on set or in the studio audience find the bravery to speak out loudly and help focus the national conversation on that we need to deport racism, not people,” Santiago Cejudo, an organizer with Deport Racism, said in a statement announcing the bounty. “It’s 2016, and Trump needs to hear that you can’t win the White House without the brown vote.”

Montgomery, the video’s director, stands by his coupling of children and profanity.

The video’s director, Luke Montgomery, said having kids drop F-bombs on camera is justifiable given the vitriol Trump has directed at Latino immigrants. “They are using bad words for a good cause,” Montgomery said in a statement.

“Threatening to tear up the constitution to strip these citizens of their rights is offensive language,” he said. “Which is why the adorable and articulate Latino kids in the video fight back with some comedically offensive language of their own.”

And if this video looks familiar, it’s because we’ve seen a similar format before. Remember the little girls saying “f*ck for feminism“? Same dude.

@NoahCRothman Same guy did both videos

Sure, Trump called Mexicans “rapists” and touted plans to make our southern neighbors pay for the biggest, most beautiful wall ever constructed. But does that justify using children to hurl profanity-laced insults at the moppy-headed millionaire?

No, he didn’t. He called the people the Mexican government is sending illegally over the border rapists (and other sorts of criminals). That’s a very different proposition, and broadly speaking it’s true.

Just in case it wasn’t clear: The people streaming unchecked over the Mexican border are not in any way representative of Mexicans in general. For one thing, most of them are not Mexican.