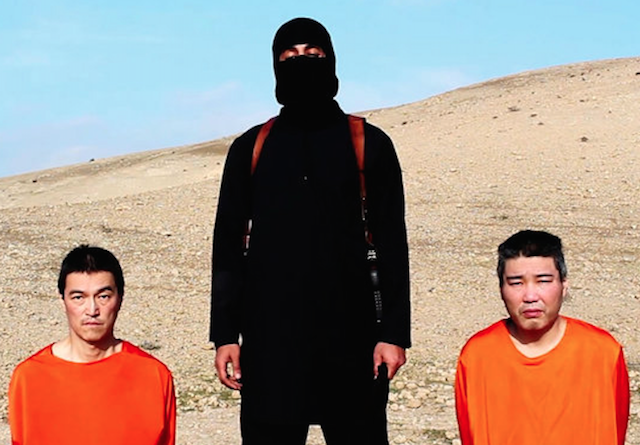 The Obama’s Administration’s whitewashing of language might have played well with the social justice warrior brigade, but voters aren’t buying it.

A survey released by Rasmussen found 60% of likely voters believe America is at war with Radical Islam.

President Obama, Hillary Clinton and other senior Democrats refuse to say America is at war with “radical Islamic terrorism” for fear of insulting all Muslims, but voters beg to disagree.

Pouring salt in the social justice wound, a whopping 56% of self-identifying Democrats also believe radical Islamist terrorists are our foe compared to 70% of those identifying as Republican.

And the data just gets more interesting:

A staggering 92% of all voters now regard radical Islamic terrorism as a serious threat to the United States. This includes 73% who say it is a Very Serious one, up 23 points from 50% in October of last year.

Voters are also more reluctant now to agree with Obama that the radical Islamic State group (ISIS) which masterminded the massacres in Paris last weekend is not a reflection of Islam itself. A plurality (46%) still thinks the president is right when he says ISIS does not represent true Islamic beliefs. But that’s down noticeably from 58% who felt that way in February after the president gave a speech equating the atrocities committed by ISIS with past sins of Christianity. Thirty-five percent (35%) now believe ISIS does represent Islamic beliefs. One-in-five voters (19%) are not sure.

Democrats in particular refuse to utter, “radical Islam,” for fear of alienating voters or appearing less than sensitive. Is it true that not all Muslims are radical terrorists? Yes. But it’s also true that all radical Muslims are well… Muslim.

In the context of the Democratic presidential debate immediately following the Paris attacks, The Federalist’s Ben Domenech explored the Democratic aversion to accurately labelling radical Islam:

Early on in the debate, moderator John Dickerson put a direct question to Clinton on the subject of radical Islam. Quoting Sen. Marco Rubio’s opinion that the Paris attack showed clearly that “we are at war with radical Islam,” he asked whether Clinton agreed with that characterization.

At which point Dickerson politely interrupted to point out that Rubio “didn’t say all Muslims. He just said radical Islam.”

Clinton continued, stumbling a bit, that she did not want to paint “with t0o broad a brush” and cited George W. Bush’s assertion that we are at war with “violent extremism” and “people who use their religion for purposes of power and oppression.” Sen. Bernie Sanders and former Gov. Martin O’Malley joined Clinton in rejecting the term “radical Islam,” citing much the same rationale.

The irony of those unwilling to call the threat of radical Islam by its name is that in endeavoring to be intelligent and understanding, in trying to avoid painting with “too broad a brush,” they are in reality betraying their ignorance or inability to grapple with the true nature of today’s foe.

Our leaders do us no service when they fail to recognize that the threat the so-called Islamic State and its allied terrorists represent is a civilizational not a geopolitical conflict, and can only be understood through that lens. The radicals who perpetrated the Charlie Hebdo attack were not motivated by Western Imperialism, but by members of a free society violating Islamic law.

The unwillingness of any candidate for the nomination of the incumbent ruling party in America to grasp this fact is about more than a nod to political correctness: It betrays a very real lack of understanding and an inability to learn any lessons from the past decade and a half.

It also demonstrates an inability to learn from the Islamic world itself. American policymaking in the Islamic world must begin with a foundation of respect for Muslims, especially when they tell us about their faith.

Vox also has a decent piece which chronicles President Obama’s hesitancy to use the term and the partisan debate it precipitated.

Regardless of the nuances of either sides arguments, voters increasingly have no problem identifying America’s greatest threat as radical Islam.

What is the difference between a Radical Moslem and a Moderate Moslem?

The Radical Moslem wants to personally kill you for not converting to Islam.

The Moderate Moslem is content to let the Radical Moslem kill you.

Then claims “only a tiny percent are radical”. The radicals would not, could not, exist without the active and eager support of the overwhelming majority of their community.

Because moderate Muslims make up such a large, vocal and active voting block?

On what fake channel?

The Queen of Jordan said that the “I” should be removed from “ISIS” because they aren’t Islamic.

She seems to get it. Obama only now has been able to mention “Daesh.”

As I recall, the Queen of Jordan is a hot babe. However, her brain is not so hot.

ISIS is as close to Mohammed as possible without him running it himself. Everything ISIS does is in the Koran or the Sura or the Haddiths.

The Dems normally call these people “ISIS”,”ISIL” or sometimes “Daesh”. The first two terms, (not sure on the third) imply that they are indeed a state of one sort or another.
They have declared and implemented acts of war on the west. They have an army. Any agent of this group in a foreign country, not in uniform is therefore a spy, during a time of war, and should be treated as such.

Daesh hates to be called Daesh. Therefore I will call them Daesh.

As Al Sharpton might say, if he was worth being called an American citizen, “Daeshit.”

Repubs have a problem.

Today I channel-hopped to NPR on KPBS in San Diego, and caught this jerk announcer Hartman, telling people that those horrible Republicans want to tattoo Syrian refugees, he corrects himself, says that none of the candidates have really suggested that, yet, but it’s coming….

Then he put on some black woman, bitter and angry about white people who don’t appreciate that black people serve in the armed forces….

Then they went on whipping themselves up about the supposed of attitudes that I just haven’t seen among any real people.

This happens a LOT on NPR: They lie, taking something sort-of related to a Republican position and exaggerate it well beyond parody, then castigate their straw-man enemies.

Problem is, I also know people that think this nonsense is real.

Another problem is, the taxpayers are helping fund this nonsense

Remember this: the Republicans (under that treasonous, corrupt scumbag Boehner)had the opportunity to de-fund NPR.