In light of the terror attack in Paris and (presumably) Obama’s weak performance against ISIS and bizarrely petulant performance in Turkey, terrorism now rivals the economy as the single most important issue to American voters.

Terrorism suddenly rivals the economy as the single most important issue to Americans in the 2016 presidential election — and a year out, a new ABC News/Washington Post poll finds more people paying close attention to the contest than at this point in any race back to 1988.

After years of dominating the political landscape, the economy now has company. Given the Nov. 13 attacks in Paris, 28 percent of Americans now call terrorism the top issue in their choice for president, compared with 33 percent who cite the economy. Nothing else comes close.

Attention, moreover, is focused as never before. Three-quarters of Americans say they are closely following the 2016 race, including three in 10 who are following it very closely. That’s the highest level of attention at this point in a presidential race in polls back nearly 30 years.

According to this report:  “Partisan divisions are 33-23-36 percent, Democrats-Republicans-independents.”

As noted, terrorism has re-emerged as a key issue, with a partisan division. Forty-two percent of leaned Republicans call it the single most important issue in their vote for president, while 29 percent pick the economy. Priorities flip for leaned Democrats — 39 percent call the economy the top issue, while 19 percent say it’s health care, 18 percent terrorism. 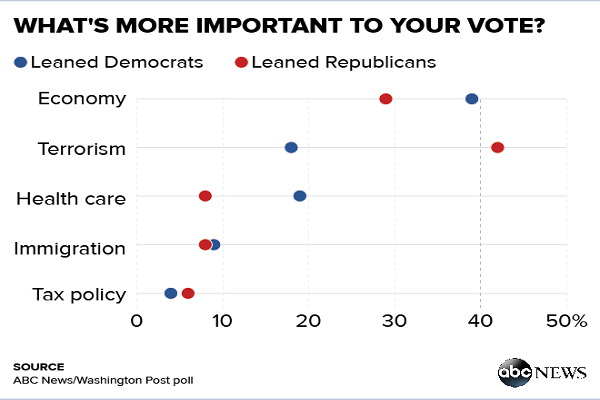 This increased focus on terrorism is likely to be a boon to Donald Trump, whom the ABCNews poll shows is “most trusted” among Republicans on the issue.

Indeed, recent polls show that Trump has regained his lead over Carson, and they also show that Cruz is surging, possibly picking up Carson supporters.

An NBC poll has Cruz surging to tie Ben Carson for second place (both at 18%) behind Donald Trump (at 28%), who has retaken the lead in this poll.

According to Public Policy Polling’s latest poll, Cruz is surging, while Jeb’s numbers are going in the wrong direction:

There’s only one candidate in the whole field who can really claim momentum compared to a month ago: that’s Ted Cruz. He’s doubled his support from 7% in early October to its current 14% standing. He’s also seen a net 9 point improvement in his favorability rating from +20 (50/30) a month ago to now +29 (55/26). Cruz is leading the field among voters who describe themselves as ‘very conservative’ with 29% to 24% for Trump and 22% for Carson. On a related note he’s also ahead among self described Tea Partiers with 26% to 23% each for Carson and Trump. He is definitely the candidate headed in the right direction with the right at this time.

Besides Cruz there’s only one other candidate in the whole field whose support has moved by more than 2 points over the last six weeks. That’s Jeb Bush who’s headed in the wrong direction- his 5% level of support is only half of the 10% that he had in October. And Bush just continues to get more unpopular- only 27% of GOP primary voters see him favorably to 50% with a negative opinion. We’ve written a lot this year about his struggles with conservatives and those continue- he has a 22/58 favorability with ‘very conservative’ voters and only 4% support him for the nomination. But he’s also struggling at this point even with moderates- he has a 23/52 favorability with them.

In an odd finding, The Boston Globe is reporting that Mitt Romney tops the presidential primary field in New Hampshire.  As Romney is not a candidate, however, Trump actually leads in NH, with Marco Rubio a distant second.

If the former Massachusetts governor were added to the mix of the 14 other Republican candidates running in the Feb. 9 first-in-the-nation presidential primary, New Hampshire voters would, if the election were held now, give him a 2-to-1 win over Trump, the leader of the field.

Romney, who said as recently as last week that he is not interested in running, did not file for the New Hampshire primary ballot by the deadline last Friday. He would have the support of 31 percent of Granite State Republicans compared with 15 percent backing Trump, the poll indicates.

With Romney, the party’s 2012 presidential nominee, out of the picture, Trump continues to dominate. Trump has 22 percent support, double that of Senator Marco Rubio of Florida, who ran second in the poll, with 11 percent.

Donald Trump has returned to the lead in Iowa while Ted Cruz has now surged past Ben Carson into second place. Carson has slipped from a first-place tie into third.

While Iowa’s Republicans generally feel Trump is ready to be commander-in-chief, Cruz scores even better on this measure, boosted by support from very conservative and Tea Party Iowans who feel he is ready to assume the post. That’s more than say so about Trump, Carson, Rubio and Jeb Bush.

Since last month, Ted Cruz has gained ground — and Ben Carson has lost ground — among some key voting groups in Iowa: evangelicals, Tea Party supporters, those who are very conservative and older voters. And while Trump still leads among some of these groups, it’s Cruz who is ahead among the very conservative, and Trump leads Cruz by just two points among evangelical voters.

Fox News has Trump leading with 28%, Carson at 18%, and Cruz and Rubio at 14% and report that at least seven GOP presidential candidates would beat Hillary if the race were held today.

Trump was masterful this morning in his interview with Stephanopoulis. He doubled down on everything, blew apart the nattering nabobism. I can see why he is so popular. Who else does this or can do this? The media are beneath contempt and Trump seems the only one recognizing this fact and acting accordingly from day to day.

Carson’s comments about the trade deal were disastrous. How could he misread this so badly? That is a big reason for his dip.

It will come down to Cruz vs. Trump. At that point, it will be entertaining to watch the GOPe try to romance Cruz.

What on earth makes you think the GOPe will try to coopt Cruz? No, what they’ll do is scorch the earth and try to get Hillary elected.

Yes, that’s how Cruz wins. He is the only candidate capable of uniting (after a fashion) the rebellion and the empire. He is good enough of a politician to pull it off. This is what many overlook — the winners of national political elections are always the best politicians, not the best outsiders.

The LSM laughed when Trump went to Iowa and appealed to them in his typical NY style. Iowa has heard. Meantime, my Ted is moving up on the outside. Cruz-Trump 2016.