Politico set out to damage Ben Carson’s credibility, but ended up damaging its own. 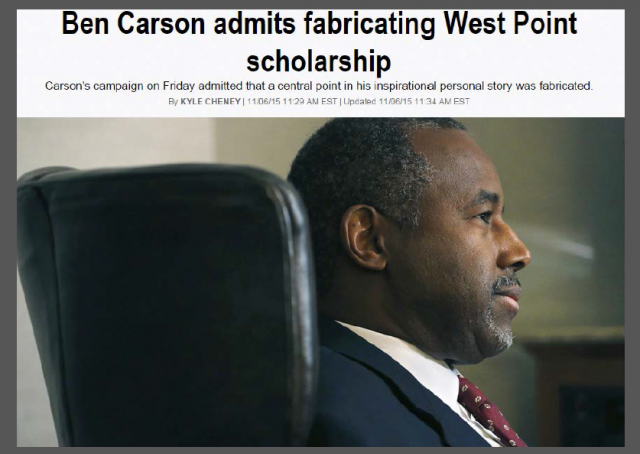 I first heard about this story in the car listening to Rush Limbaugh. It sounded bad.

The issue was whether Carson had lied about applying for and being granted admission to West Point on a scholarship (emphasis added):

Ben Carson’s campaign on Friday admitted, in a response to an inquiry from POLITICO, that a central point in his inspirational personal story was fabricated: his application and acceptance into the U.S. Military Academy at West Point.

I don’t know how central it was to his narrative – I had never heard about it, but then again, I don’t follow Carson that closely.

Here was the passage in question from Carson’s autobiography:

At the end of my twelfth grade I marched at the head of the Memorial Day parade. I felt so proud, my chest bursting with ribbons and braids of every kind. To make it more wonderful, We had important visitors that day. Two soldiers who had won the Congressional Medal of Honor in Viet Nam were present. More exciting to me, General William Westmoreland (very prominent in the Viet Nam war) attended with an impressive entourage. Afterward, Sgt. Hunt introduced me to General Westmoreland, and I had dinner with him and the Congressional Medal winners. Later I was offered a full scholarship to West Point. I didn’t refuse the scholarship outright, but I let them know that a military career wasn’t where I saw myself going.

Here was the original lead banner on Politico’s homepage: 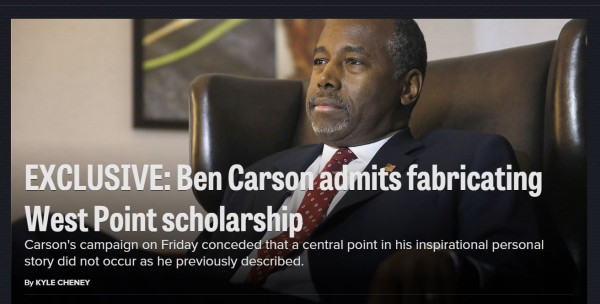 Here was the original article banner and headline: 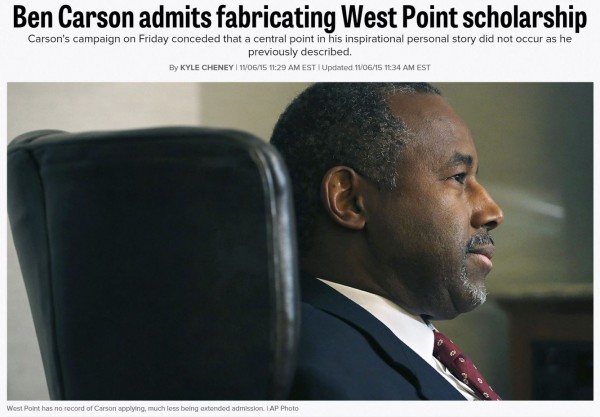 There was complete celebration not just in the liberal media, but in many parts of the conservative media by people who didn’t like Carson’s candidacy to begin with, even if they liked him personally. There was a piling on by some in the conservative media just like after the false allegation in 2011 that Sarah Palin’s electoral map was connected to the Gabby Giffords shooting. (More on that in a later post.)

Donald Trump immediately jumped on it to bash Carson on Twitter.

Jeb on Carson: "I trust him, I believe it. I don't trust Politico. If it's between Politico and Ben Carson, I'm in the Ben Carson column."

But in the hours after the publication, some conservative writers started to dig into the facts. Ben Shapiro, who explicitly stated that he didn’t support Carson, wrote an excellent post debunking the Politico article, No, Ben Carson Didn’t Lie About West Point. It’s Another Media Hit Job.:

Politico followed up on this story. They reported one additional piece of information that seems to conflict with Carson’s story: Carson never applied to West Point, and was never extended admission.

But Carson never said he applied. He said he was extended a full scholarship offer. What’s more, West Point doesn’t offer scholarships: all admission is free contingent on serving in the military afterwards. It thus seems probable that Westmoreland or another military figure tried to recruit Carson, telling him that he wouldn’t have to pay for his education – and that Carson read that as a “full scholarship,” and never applied.

In fact, that’s exactly what Carson’s campaign manager said to Politico in an email:

Dr. Carson was the top ROTC student in the City of Detroit. In that role he was invited to meet General Westmoreland. He believes it was at a banquet. He can’t remember with specificity their brief conversation but it centered around Dr. Carson’s performance as ROTC City Executive Officer. He was introduced to folks from West Point by his ROTC Supervisors. They told him they could help him get an appointment based on his grades and performance in ROTC. He considered it but in the end did not seek admission.

But here’s how Politico editorialized: “When presented with this evidence, Carson’s campaign conceded the story was false.”

That’s nonsense. They did no such thing. They provided details that corroborated Carson’s story and explained his loose use of the language. If someone told you that you could go to college for free, you might reasonably conclude that you had been offered a full scholarship to attend that university. But Politico would call you a liar if you used such language to describe the exchange.

Others also did good work on this, including Gabriel Malor at Ace of Spades HQ, Politico’s Hit on Carson

1) The headline is misleading. The Carson campaign statement does not admit he fabricated anything….

(2) The lede is outright false. Politico’s Kyle D. Cheney starts with this claim: “Ben Carson’s campaign on Friday admitted, in a response to an inquiry from POLITICO, that a central point in his inspirational personal story was fabricated: his application and acceptance into the U.S. Military Academy at West Point.” But no where in the piece does Cheney tell the reader where Carson made this “application and acceptance” claim.

(4) There is a lot of evidence that Carson never made that claim. Particularly, because in both his book and his speeches, he talks about whittling his options down to Harvard and Yale, and in the end deciding to apply only to Yale, where he was accepted.

(5) Carson’s book does have a single line: “Later I was offered a full scholarship to West Point.” This isn’t quite wrong either. Nobody gets scholarships per se to West Point; as a service academy, repayment is the term of service after graduation. But that’s exactly Carson’s point when he says he didn’t take up the West Point opportunity because he didn’t want the service commitment to delay his medical career.

I am NOT a Carson backer, but I'm not going to participate in a full-fledged media bullshit hit. https://t.co/wtnmty6Fmj

Dave Weigel from Washington Post, and others did yeoman’s work exposing the misleading nature of Politico’s story:

Here’s the relevant bit from “Gifted Hands” FWIW. Carson never says he got in to West Point. pic.twitter.com/ypBz4J7hrl

In Gifted Hands, Carson notes that he only had the $ to apply to one school. IE, he never applied to West Point. pic.twitter.com/XWhRThgRzW

This @daveweigel find is very bad for @politico. https://t.co/ScvpGqE5yt

Did @Politico fabricate its central claim?

Even some mainstream media accounts had to admit Politico botched the story:

Politico then changed its headline and story line:

The new Politico lede remains problematic: Carson just now “conceded that he never applied,” tho he wrote that in his memoir 23 years ago.

Here’s how the homepage banner looked after the title change:

Here’s how the article page banner looked after the title change: 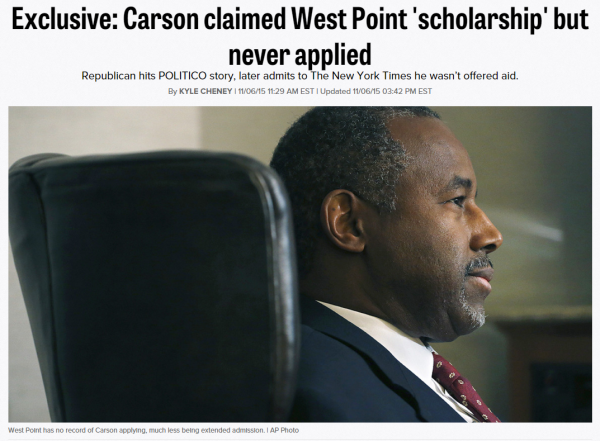 Late this afternoon Carson explained his side of the story on the Sean Hannity radio show:

I will continue to add to this post as more analysis comes in, but there is a bigger issue here.

This is not about Ben Carson, just like it was not about Sarah Palin when she was falsely accused of causing the Gabby Giffords shooting. You can dislike either or both of them, and still be disgusted by the way they are treated by the press.

I’ll have more on that in a later post, probably Sunday.

Does Politico care? I doubt it. They did the damage they intended to do.

UPDATE: Scott Baker, the Editor-in-Chief of The Blaze, has a West Point Story almost identical to Ben Carson’s:

He did not recant anything, nor did he say anything in an inaccurate manner. As i said above, I read the original. The New York Times, Politico and CNN are FOS.

At what point can you sue these bastards for libel and slander?

NYT v. Sullivan established the “actual malice” standard in reporting, which creates a ridiculously high burden of proof on the plaintiff in suing a news organization. Unless you’ve got a whistle-blower, the burden of proof is so high that no Jury or Judge will ever say it is met, and if for some reason they do, an appeals court will find it to have been reversable error or a finding without basis in law or fact sufficient to grant a mandamus judgment non obstante veredicto (Judgment not withstanding the verdict).

The Media organization would have to KNOW that the information was false, or act in reckless disregard to the information’s truth or falsity, and Carson DEFINITELY qualifies as a “public figure.” Justapose this with the poor sap who was accused of raping “mattress girl” and was hosed in the press, and when he sued the Judge labeled him a “public figure” even though he had never been convicted, never sought the spotlight and was trying to keep a low profile.

There’s nothing wrong with calling a West Point appointment a scholarship. It definitely qualifies under definition number two. It may not generally be called a scholarship because it requires conditions, but so do all scholarships. An academic scholarship requires a student to follow the rules and maintain his grades, a sports scholarship requires those things AND successful participation at a high level in a sport, so they are in that sense, no more “free” than a military academy appointment.

noun
2.
a grant or payment made to support a student’s education, awarded on the basis of academic or other achievement.

Congresswoman Lois Capps of CA actually makes these nominations to the military academies. And how does she describe them?

“The full four-year scholarship is valued at more than $350,000 which includes tuition, room and board, medical and dental care and a monthly salary.”