Smart move for his campaign? 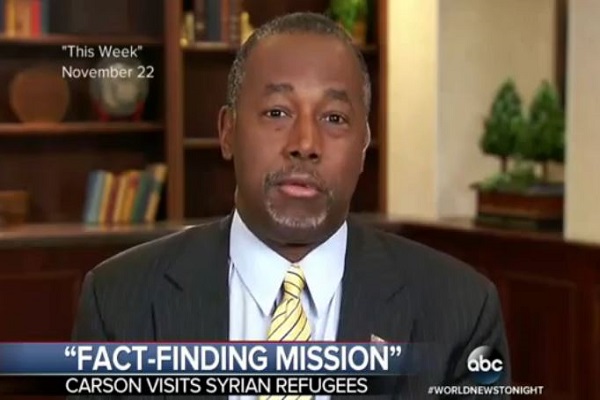 Amidst growing concerns of his lack of knowledge of foreign policy, Dr. Ben Carson headed on Friday to Jordan to visit a refugee camp in Jordan.

“Republican presidential candidate Ben Carson has traveled to a refugee camp in Jordan on a “fact finding and information gathering mission.”

Is this a smart move by the campaign?

Carson is viewing the trip as an opportunity to see up close the complexities surrounding the Syrian and Iraqi refugee crisis:

“I find when you have firsthand knowledge of things as opposed to secondhand, it makes a much stronger impression.”

Carson’s itinerary includes not just a visit to the United Nations-run refugee camp, but to a clinic and hospital as well.

The famed neurosurgeon is looking to become a student of these experiences.

“I want to hear some of their stories, I want to hear from some of the officials what their perspective is,” Carson told the paper in an interview before he left. “All of that is extraordinarily useful in terms of formulating an opinion of how to actually solve the problem.”

Carson initially opposed the refugee resettlement in the United States after the Paris terrorist attack:

“If we’re going to be bringing 200,000 people over here from that region — if I were one of the leaders of the global jihadist movement and I didn’t infiltrate that group of people with my people, that would be almost malpractice.”

Having arrived in Jordan today, Carson is calling for the resettlement of refugees in the Middle East.

Carson’s convoy rolled onto the Azraq refu­gee camp along a highway with heightened security, with each car being stopped and searched at a police checkpoint. After the visit, the convoy headed for a planned visit to the Zaatari refu­gee camp. Media were not allowed into either camp.

According to the Associated Press, Carson said in a statement after the visit that refugees should settle in Middle Eastern countries.

“Syrians have a reputation as very hard working, determined people, which should only enhance the overall economic health of the neighboring Arab countries that accept and integrate them into the general population,” Carson said.

“The humanitarian crisis presented by the fleeing Syrian refugees can be addressed if the nations of the world with resources would provide financial and material support to the aforementioned countries as well as encouragement,” read a statement attributed to Carson.

Following Carson’s trip, he shouldn’t expect less criticism or for scrutiny to cease, but rather more questions will emerge and there would be general consensus on whether Carson’s views on national security and foreign policy have changed or evolved.

Ben Carson has let flim-flam artist use his name to fleece over 5.8 million dollars from honest, hard working people who were induced to send money to his campaign. Of the over 6 million collected 150 thousand was all that was delivered to Ben Carson.

He should be ashamed of himself letting good people be taken advantage of like that. It is just a racket, don’t send any money to anyone.

The way you haave it, that can’t be correct. His campaign has a lot more money than that. This is what that is:

A super PAC was created supposedly to bring down the Affordable Care Act in 2014 and it used Ben Carson as a selling point, and ultimately raised over $6 million in 2014, and of that just 2% went to Republican candidates for office (none of whom would have been Ben Carson) Donald Trump’s been including a version of that in his standard speech.

By definition, a candidate has no control over a Super Pac, although quite possibly maybe Ben carson’s business manager helped the Super PAC.

That guy, Armstrong Williams, is not too good. He got him involved with Mannatech, the health product company that once made exaggerated claims, too.

Ben Carson just separated him from his campaign a little over a week ago, so that’s a good sign. Or did he? Because maybe it’s always been that way, officially. Carson actually took a wwek off orso for what billed as a book tour.

Thank you, for clearing that up for me.