Back to the Future: Trump Won’t Rule Out Independent Run

Back to the Future: Trump Won’t Rule Out Independent Run 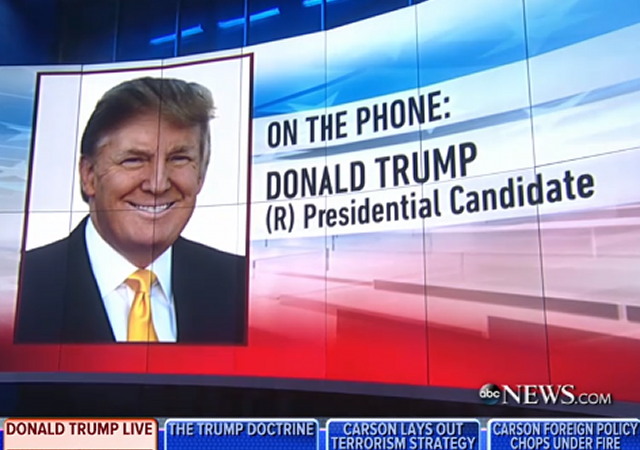 This development is cause for concern for many on the right. If Donald Trump runs as an independent, he’ll obviously take more votes away from the Republican candidate than the Democrat.

Republican presidential front-runner Donald Trump said Sunday he is open to running for president as an independent if he concludes Republicans are not treating him “fairly.”

He made his comments on ABC’s “This Week” when asked about a Wall Street Journal story first published online Friday that reported an effort by Republican establishment figures to unite to knock Mr. Trump out of the race. The group plans a “guerrilla campaign” backed by secret donors to “defeat and destroy” the celebrity businessman’s candidacy, the Journal reported.

The notion of an independent Trump bid worries some Republicans, who fear he would siphon votes from the GOP nominee and help elect a Democrat.

Asked if he would reconsider his promise not to run as an independent, Mr. Trump didn’t give a direct answer.

“Well, we’ll see what happens,” he said. “It will be very interesting. But I’m leading every poll by a lot. It’s not even a little bit anymore, it’s a lot.”

Here’s the clip of Trump on ABC. Skip to the 10 minute mark for the exchange:

The Hill has more:

Trump was asked about whether he would launch a third-party bid amid news that GOP operatives are planning to launch an anti-Trump “guerilla campaign.”

“You know, when I did this, I said I have to be treated fairly,” Trump said. “If I’m treated fairly, I’m fine. All I want to do is a level playing field.”

The GOP primary front-runner signed a pledge ruling out a third-party run in September.

But he has previously been open to the idea.

Trump first raised the possibility of a third-party candidacy in an exclusive interview with The Hill in July, saying the Republican National Committee “has not been supportive.”

Pressed on whether he would run as a third-party candidate if he fails to clinch the GOP nomination, Trump told The Hill that “so many people want me to, if I don’t win.”

“I’ll have to see how I’m being treated by the Republicans,” Trump added. “Absolutely, if they’re not fair, that would be a factor.”

Trump knows what he’s doing and this may just be a way for him to keep the GOP establishment at bay. Let’s hope that’s what’s really going on here.

Trump signed a paper not all that many months ago that said he would not run as an independent.

I don’t think you know that because I do not think that paper was ever publicly disclosed. It was waved around by Trump at a news conference.

The paper or pledge that Trump signed to not run as an independent was specifically and categorically based upon the GOPe promising Mr. Trump that he would be treated fairly by the GOPe.

That was the consideration for Mr. Trump’s promise (not that this “paper” is an enforceable agreement).

If the GOPe breaches its promise to treat Mr. Trump fairly then that action releases Mr. Trump from his promise not to run as an independent due to a failure of consideration upon which Mr. Trump’s promise was obtained.

Basic contract law and basic fairness of which Mr. Trump is obviously quite familiar. Not that such simple matters of analyses keep the usual suspects here at LI from running around in hysteria calling Mr. Trump a liar when all Mr. Trump is doing is reminding the GOPe that his signature was obtained based upon their promise to treat him fairly throughout this process all the way to the end of the convention.

Mr. Trump’s recent statements about his no third party run promise were specifically in response to a WSJ story that the GOPe was about to break its promise regarding treating Mr. Trump fairly. It was a quite understandable shot across the bow of the GOPe that Mr. Trump is not a person with which one should trifle.

Finally, if the GOPe doesn’t keep its promise to treat Mr. Trump fairly it won’t matter whether Mr. Trump runs as third party or not as to the republican nominee chances, because Trump supporters will if necessary to punish the GOPe, stay home and not vote, or go to polls and write in if necessary Donald Trump or go to the polls and vote against every GOP candidate all up and down the ballot from dog catcher to president and everything in between just to teach the GOPe a lesson.

So if the GOPe wants any chance at all of not suffering YUUUUGE losses they need to support Trump just the same as if his name were Rubio or Bush. They can’t and won’t win without the Trump supporters. So don’t piss us OFF. Better to take their shot at winning with Trump than to guarantee their losses without Trump.

Thank you for that monologue. It is refreshing.

Well stated sir. A “Level Playing Field” was a fundamental condition of Trump’s pledge, and one we all should support, regardless of our preference of candidate.

“Fairness”, of course, HAS no objective meaning, and is certainly not assured in politicking or WAAAAAR (as Crazy Cat Lady would have it).

In a related story, Putin went all T-rump on Turkey for “unfairly” shooting down a Russian plane, thus starting WWIII, and causing Gary (the liar) Britt to soil his thong.

You guys are hilarious…!!!

But not nearly as funny as the meaningless drivel you post when unable to construct even the simplest of rebuttals.

I’m beginning to realize you actually think the nonsense you write such as the post to which this replies are actually intelligent or humorous when in reality a Monkey hitting random keys on a keyboard could write things more applicable to the topic at hand and with greater humor.

Like Obama you open your mouth with nonsense and then BAM !! News like the CNBC poll referenced below completely repudiates your entire world view and shows the complete lack of knowledge about Mr. Trump and this election cycle.

You and Obama just two intellectual equals like peas in a pod.

Rags says “Fairness”, of course, HAS no objective meaning, and is certainly not assured in politicking..

If true then you are saying Trump really out smarted and out negotiated the GOPe for making the consideration for Mr. Trump’s promise something that is undefined in the agreement.

Gotta hand it to Mr. Trump, he knows how to make a deal..

What is best in life?

To think of Gary (the liar) Britt sitting at his keyboard, brow furrowed, TRYING to compose a cogent sentence to defend his little, lying, pissing and moaning, yellow god!

When all he can contrive is a series of ad hominem.

So much for all the phony claims by know nothing LI commenters, talking heads and so called republican consultants stating GOP loses if Trump is on ballot.

The actual truth as shown by this CNBC poll is that Mr. Trump is absolutely the best chance for GOP to win whitehouse !!!!!!!!!!

If Donald Trump were the GOP nominee, he would cause the highest voter turnout, relative to any other Republican hopeful.John Kasich, on the other hand, would keep people at home.

No matter what party affiliation you consider, Trump brings them out. Republicans, Democrats and independents are all most likely to show up if Trump is on the ballot. (In our analysis, we assumed a constant variable: the Democrats nominating Hillary Clinton.)

Not only do they show up to vote, but they vote for Trump. He’s got the highest percentage of voters — across both parties and independents.

***UPDATE*** Yesterday, Fergus Cullen, who chaired the NHGOP in 2007 and 2008, filed a complaint on Monday with the state Ballot Law Commission to have Donald Trump removed from the Primary ballot in New Hampshire. Cullen is a ¡Jeb! supporter [¡Jeb! announced his New Hampshire campaign in his living room], but the complaint is also filed on behalf of a Kasich PAC.

Cullen is alleging that because Trump has made statements that do not agree with the Republican Party and its platform means that he is not really a Republican and therefore should be ejected from the ballot. Aside from the fact that the Republican Platform specifically bars any form of Amnesty, which would trip up most of the field; there is no such legal requirement.

SECOND Party, anyone; if they pull this off?

The State Ballot Commission just unanimously rejected the attempt to throw Trump off the ballot. Mind you, the fact that the GOPe would try something this stupid does not indicate that they intend to have an honest nomination.

There is apparently no end to the stupidity of the little weasels of the GOPe. Kasich is just a little fool with an oversized ego opposed to his meager talent and skills which are in proportion to his tiny size (oh and he’s short too) ;-).