“Man, are we lucky she wasn’t president during the Cold War!” 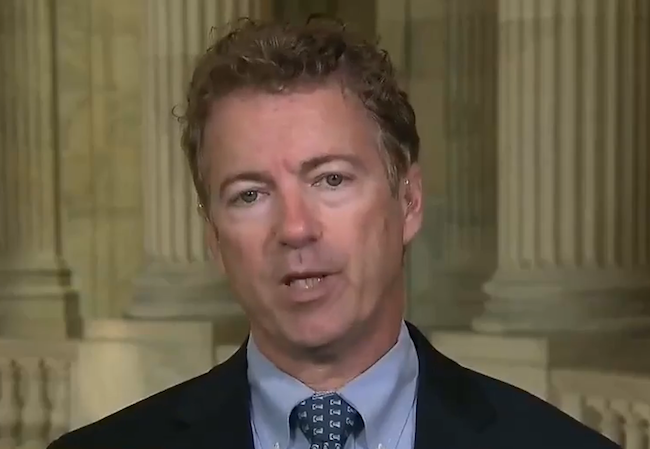 Rand Paul is in trouble.

The Real Clear Politics average has him at just 2.3% in the polls, putting him well behind outliers like John Kasich (3.2%), Mike Huckabee (2.9%), and Chris Christie (2.6%). Substantive comments in last month’s CNN debate didn’t help him much—but Carly Fiorina’s popularity spiked.

Enter a golden opportunity for Paul to hitch a ride on Fiorina’s media wave. During an interview yesterday with Wolf Blitzer, he lashed out against Fiorina’s hardline stance against dealing with Putin and tolerating Assad’s regime in Syria:

When Wolf Blitzer asked Paul how he would deal with Russia in Syria, Paul brought up Fiorina’s previous remarks that she wouldn’t want to talk to Putin and said, “Man, are we lucky she wasn’t president during the Cold War.”

At one point Blitzer noted how Paul himself has a noninterventionist policy and that he doesn’t consider to be “isolationist.” Paul then said that it’s people like Fiorina who want to “isolate us” and cut off channels of communication to engage in international diplomacy.

This whole line of attack was indeed set up during last month’s CNN debate, when Paul slammed Fiorina’s line of thinking on Putin and diplomatic relations with Russia:

This could be a good pivot for Paul, who has spent a great deal of time criticizing Donald Trump on both matters of policy, and on Trump’s approach to handling his fellow candidates:

As I said above, this is a good play for Paul—or at least it will be, if his team can pull off a corresponding media push and connect it to current events.

Judging by those polling numbers, though, that might be a lot to ask.

Instead of another free advert for Fiorina why don’t you cover the brilliant questioning of the Sierra Club head flunky by an actual conservative? Cruz at his best on Gorebull Warming.

This is why I want to see Cruz on the SCOTUS. Awesome!

What other “squirrel!” BS are you going to try to distract from the post?

Speaking of squirrels, you are still just playing with your own nuts and hoping for a prize for brilliance.

Nice of you to identify as one of my nuts.

So what? You are letting stereotypes get in the way of clear thinking.

Yes, but Cruz doesn’t have that many supporters yet. He is my second choice however.

Rand Paul’s policy is more like that of Henry A. Wallace during the Cold War, except that I don’t think he posits that Russia has good will and good intentions.

Obama – he’s so slow to believe that Putin is really doing what he’s doing. Of course, Putin tried to hide things, sayinbg he was onl;y deleivering arms.

Now Obama says what Putin is doing won’t work – of course he’s assuming Putin wants a unitary, peaceful, Syria ruled by Assad, and Obama isis saying he won’t get it.

A unitary Syria not in the grip of a civil war may be less important to Putin than the Assad government keeping control of the central bank, passport issuance, key locations in or near Damascus including its airport, the Lebanese border, and a coastal strip where Russia has bases.

May as well pack it in, Rand. There was a time when you had my support, but your recent switch to petty attacks on the other Republican candidates shows that you’ve sold out to the GOPe. Just what did McConnell promise you, anyway?

Rand’s mix of libertarian and GOP moderate politics is not an easy or platable blend.

There’s something about his presentation of self in public that is off-putting to me. Too often, when he is asked a question in an interview or debate, the look on his face seems like he’s thinking, “I can’t believe I’ve got to explain this shit to these morons…” Unfair, but that’s the impression I got.

Rand Paul and Donald Trump have the same isolationist foreign policy.
Just walk away from the middle east and let Iran and Russia take over.

Paul and Trump have no idea what is going on.

Many here do not know Putin’s background and especially how Russia functions with their Byzantine and Potemkin Government and system.

Putin was KGB trained. Today an admirer of Stalin.
Putin stated, the worst event of the 20th century was the breakup of the Soviet Union.

When Putin took over Russia, he created the new KGB, the FSB, Federalnaya Sluzhba Bezopasnosti,
Putin’s FSB draws a direct line of inheritance from the Cheka set up by Lenin.
In the 1990s one of the persons who trained in the FSB Russia was al-Zawahiri, bin Laden’s right hand man and now the head of al Qaeda.

No, Putin is NOT the Free world’s friend.

Since I can’t directly reply it seems, this is for Ragspierre, and others as well:

That’s why I’m unhappy about characterizing what she said as “Fiorina’s hardline stance against dealing with Putin and tolerating Assad’s regime in Syria”. It’s a little bit more than that!

Wul, DUH! What? You suggest we have a policy where we set out a no-fly zone with the provision that WE back down if tested?

No, I suggest the US think better of establishing a no-fly zone over a country it has no right to establish a no-fly zone over on its own authority for the defense of rebels with which we are “aligned” but not actually allied, for the benefit of sponsoring attacks on a UN member national government. One of those things ought to change before pulling a stunt like this.

In the meantime, thanks for actually defending the posture of shooting down Russian jets.

Have they? (If you say they have, you’d best post links.)”

Since I have you dead to rights on your last build version. Now we can proceed on more honest terms.

It helps to appear slightly unhinged.