Who Will Replace Boehner?

Who Will Replace Boehner?

“If I wanted to manage a mental health hospital, I would have gone into another line of work.” 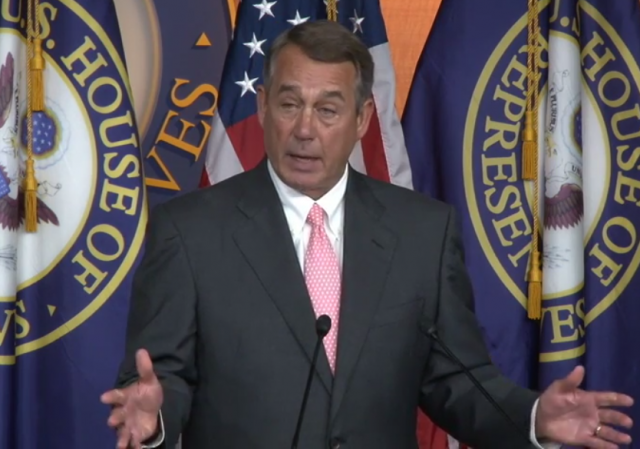 After Speaker Boehner’s unexpected resignation announcement Friday, the scramble to replace him is underway. Friday, Congressional members hoping to fill Boehner’s shoes were frantically whipping votes and calling in favors.

Boehner indicated he will not vacate his role until the end of October, leaving the House five weeks to select his replacement.

According to the Daily Caller, Issa and Gowdy are out:

House Majority Leader Kevin McCarthy is in the running as a potential successor to Boehner, but other members are likely to be interested in the job as well. Could a member of the Freedom Caucus become speaker? Issa does not think so.

“Boehner never had a camp per se,” the California Republican said when asked if someone from Boehner’s circle could be the next speaker. “I would say it’s not likely to be a member of the Freedom Caucus, but it’s certainly going to have to be somebody who the Freedom Caucus has respect for.”

South Carolina Republican Rep. Trey Gowdy told reporters the job of speaker is hard and he does not want it.

“Oh please. Have you seen it? If I wanted to manage a mental health hospital, I would have gone into another line of work,” Gowdy said.

Issa also told TheDC he has no interest in running for Boehner’s job.

“Aren’t we all leaders?” he asked.

He explained, “No. This came as a shock to me. I’m busy trying to do immigration reform and patent reform but I’ll look at all the candidates.”

Louis Gohmert is also a no:

Who wants the gavel? It’s still early, but these are a few possible contenders:

Currently billed as Boehner’s most likely replacement, McCarthy is definitely in the running. From the San Francisco Gate:

The California Republican, who is the overwhelming favorite to succeed John Boehner as speaker, has relied on those skills to navigate the treacherous waters of the fractious GOP conference.

But they won’t change the unpleasant reality of the limits the tea party-driven House confronts in a capital city dominated by a Democratic president — and the resulting frustration for conservatives who stormed Washington on a wave of opposition to President Barack Obama.

Like Boehner, McCarthy is a realist. But conservatives frustrated with Boehner’s willingness to strike deals with Democrats see an ally in McCarthy, who cut his teeth as an aide to powerful former Rep. Bill Thomas, whose seat he easily won in 2006.

…Then, as now, there is no credible alternative to McCarthy’s ascent.

There’s more to his success than luck, however. Inside leadership, McCarthy’s accessibility and open-mindedness has won him friends in all corners of the GOP conference and he’s more popular among junior lawmakers than Boehner.

“He is a savant of human relationships and that makes him somewhat unique,” said Rep. David Schweikert, R-Ariz., who admits their relationship has had ups and downs.
“The reason he’s so successful with the members is he knows their districts in addition to knowing them,” said Erica Elliott, a former aide and confidante. “Kevin knows 100 percent of the time exactly where the conference is.”

The Congressman from Texas is weighing his options and will announce his decision early next week. The Dallas Morning News reported:

The Daily Herald reports Rep. Roskam has quickly garnered enough support (50 votes) to call a meeting next week. Even so, Rep. Roskam has yet confirm he will be seeking the speakership:

U.S. Rep. Peter Roskam says he has enough support to call a meeting among fellow House Republicans to talk about the future of the party in the wake of House Speaker John Boehner’s retirement announcement Friday.

The Wheaton Republican sent a letter to his colleagues early Saturday morning requesting the meeting and said by the end of the day he had secured signatures from the more than 20 percent of House Republicans needed to call it.

“It is not every day a sitting speaker of the House of Representatives steps down because of divisions within a deeply conflicted Republican majority. That unusual development alone should give us all great pause,” the letter reads.

Without a deeper discussion, “we won’t heal the fractures in a conference that has thus far proved unleadable,” he wrote. “In fact, we will find ourselves right back where we are now — stymied by dysfunction and disunity. … In short, we need a plan, not a person.”

…The letter makes a point possibly aimed at the early leadership favorites that he tried to emphasize just after Boehner’s announcement, saying “simply reshuffling the deck won’t serve our members.”

After Roskam tried to move up last year, he said the loss came largely for geographic reasons. He’s a Republican from a Democratic-leaning Illinois. But Saturday, he sought to publicly downplay his own future in calling for the meeting, saying he’s not announcing a run for leadership at the moment.

“This is not about me,” he said. “This is about understanding the importance of this historic moment — the resignation of a speaker due to internal party divisions — and making sure we empower our conference and leaders to fix the mistakes that got us here.”

From the Washington Examiner:

One is House Majority Leader Kevin McCarthy, R-Calif., the presumptive front-runner given that he’s the number two Republican in the House. The other is Rep. Daniel Webster, R-Fla., who some might forget has already run for House speaker, and said Friday he would run again.

“My goal is for the House of Representatives to be based on principle, not on power,” he said. “Every member of Congress deserves a seat at the table to be involved in the process. I will continue fighting for this to become a reality in Washington, and will be running for Speaker of the House.”

Back in January, when the new Congress convened, members continued the tradition of standing up in the House chamber to declare who they support as speaker. Webster was one of three Republicans who ran against Boehner.

Webster only got 12 votes, but that made him the clear choice for opponents of Boehner. The other two candidates, Reps. Louie Gohmert, R-Texas, and Ted Yoho, R-Fla., got just 3 and 2 votes, respectively.

Conservatives (including some who were publicly anti-Boehner) seem to be OK with McCarthy. Surprises can happen, and it’s still early. An hour in, McCarthy seems to be sitting pretty.

That said, there’s an open position of Majority Leader now. I am told that Tom Price will take a strong look at this race. A rematch with Cathy McMorris Rogers, as well as potentially against Steve Scalise and Jim Jordan are potential others looking at the Majority Leader position.

Here's a readout on the Steve Scalise call. (Good preview of Scalise's pitch to members.) pic.twitter.com/7JN8GrdX79

No word yet if the Washington Congresswoman will go for the gavel, but she’s likely eyeing the roll of Majority Leader. All of this assumes McCarthy vacates the position should he ascend to the speakership. From the Seattle Times:

Sources close to Washington’s congressional delegation said Friday that McMorris Rodgers is working on a possible bid for the No. 2 position in the House. She’s also been identified as a leading contender in national media reports.

That path would open up if — as many expect — the current majority leader, Rep. Kevin McCarthy, R-Calif., is elected speaker once Boehner gives up the gavel at the end of October.

McMorris Rodgers, the highest-ranking woman in GOP leadership, now holds the No. 4 spot as chair of the House Republican Conference.

Bottom line: Boehner is by far the most conservative Speaker Republicans have ever had (Gingrich was great in the minority and for the first 100 days, after that he consistently backstabbed conservatives and made secret deals with Democrats, don’t let the revisionists tell you otherwise). In the ten years before he became Speaker (they don’t vote on most issues), he was rated the 8th most conservative member of the House.

The next Speaker won’t be close. Be careful what you wish for.

Just like Brat isn’t close to as conservative as Cantor was. Just wait until meaningful immigration votes DO come up, and come back bragging on him then. And squishy as Rand Paul on foreign policy, too.

You can be a conservative, or you can be a filthy “anti-establishment” hippy. You cannot be both.

You make the case for why we should no longer vote for the R’s with a few exceptions.

McConnell is a bigger problem than Boehner and Drudge is reporting that one member of the RNC executive committee has already asked for his ouster.

I suspect the internal poll numbers the various party committees are getting are terrible. So is the feedback the Senators up for reelection in 2016 are getting.

Boehner can talk all he wants about the Pope influencing his decision but that is delusional. What happened is that Meadows timed his motion for just before the House went into recess. Several conservative groups got behind Meadows and his colleagues got an earful when they went back to their districts. When they returned, a lot of them told Boehner “I love you, John. But if I support you again I’ll have primary challengers who have a volunteer base behind them.”

Who could replace Boehner?

A potato. Even a rotten one: it would do a better job.

Gowdy was careful not to say which side was the crazy side. not listening to the voters year after year might seem crazy to many people in a democratic system.

The conservatives in the house succedded in their goal of removing Boehner as speaker, but didn’t plan far enough ahead to have a candidate ready to replace him. Looks like Johnnie isn’t the only inept one. My problem with the far right leadership is that, after 4 years, they still can’t plan farther ahead than lunch.