So amazing, it will make your head spin 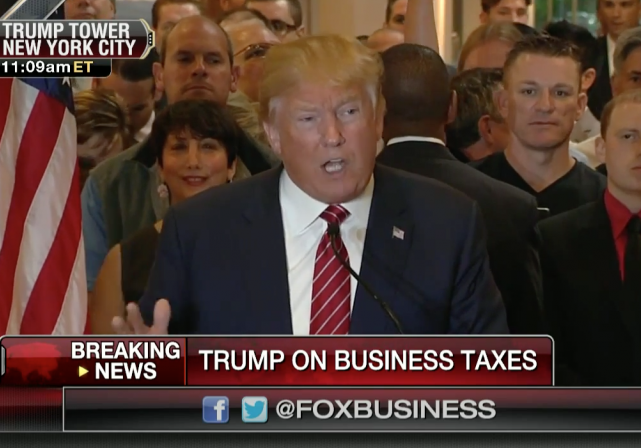 Too few Americans are working, too many jobs have been shipped overseas, and too many middle class families cannot make ends meet. This tax plan directly meets these challenges with four simple goals:

1. Tax relief for middle class Americans: In order to achieve the American dream, let people keep more money in their pockets and increase after-tax wages.
2. Simplify the tax code to reduce the headaches Americans face in preparing their taxes and let everyone keep more of their money.
3. Grow the American economy by discouraging corporate inversions, adding a huge number of new jobs, and making America globally competitive again.
4. Doesn’t add to our debt and deficit, which are already too large.

Potentially problematic for Republicans, Trump’s plan calls for raising taxes on the wealthy, while reducing the tax rate to zero for others. The “tax the wealthy” rhetoric is typically reserved for Democrats and the Occupy movement. According to Politico:

Under a President Donald Trump, some Americans will pay no income tax and the corporate income tax will fall to 15 percent, while the Treasury Department will maintain or even increase current revenue.

And while Trump emphasized the hit the rich would take under his tax plan unveiled Monday, he pairs the closing of loopholes and deductions with such a large rate reduction that it would likely add up to a substantial tax cut for many of the well-to-do.

The tax plan “is going to cost me a fortune,” the billionaire candidate told a gathering of reporters at Trump Tower on Monday morning.
“We have an amazing code. It will be simple, it will be easy, it will be fair,” he explained.

Under Trump’s plan, the Republican candidate explained, “there will be a large segment of our country that will have a zero rate, a zero rate.”

…Under the proposal, individuals making less than $25,000 and married couples making less than $50,000 will not have to pay taxes. The current highest income-tax rate—39.6 percent—would drop to 25 percent. Overall, the number of rates would decrease from the current seven to four, at 0, 10, 20 and 25 percent. While 36 percent of American households do not pay income tax currently, that share would jump to 50 percent.

“My plan will bring sanity, common sense and simplification to our country’s catastrophic tax code,” Trump told the Journal. “It will create jobs and incentives of all kinds while simultaneously growing the economy.”

Romney got crushed for deriding the 47% who don't may federal income tax. Trump wants to increase that number. http://t.co/Y9Ot9y9izV

At a straw poll conducted at the Value Voters Summit, Trump slumped to 5%.

Actually the Trump, Bush and Rubio plans are not all that dissimilar and, once they came through the legislative process and the numbers got jockeyed up and down, might amount to substantially the same thing. They all want to simplify the tax code, as they should. Yes, there are differences that I will leave to tax geeks far more experienced in these things than I am, but what interests me is that they all, to one degree or another, work under the assumption that the poor should pay no taxes.

On the surface, this seems just. And the poor don’t have much money to pay so it’s almost irrelevant anyway, at least as far as the national treasury is concerned. It’s what Barack Obama likes to call “fair.”

But is it? Ben Carson — the candidate from the most impoverished background of all (Rubio comes in second) — approaches it differently. Coming from his religious heritage, the doctor wants everyone, whatever their financial status, to pay something close to the tithe the church recommends (slightly more, actually). What this does is give every citizen, as the saying goes, “skin in the game.” No matter how poor you are, even if you are on other forms of assistance, you contribute something to the common good. The rich, even the ultra-rich, only pay that same percentage.
http://pjmedia.com/diaryofamadvoter/2015/09/29/the-taxman/?singlepage=true

This aspect of the plan shows Trump at his showman best. But I believe, with Ben Carson, that every American who earns money should contribute something by way of income tax. Free-loading may be winning in a sense, but saying so isn’t much of a civics lesson.

In the past, Trump has talked about the need for the very wealthy to pay more income tax. Lowering tax rates isn’t necessarily inconsistent with this talk because the wealthy might lose out due to the elimination of certain deductions and loopholes.

Trump’s plan doesn’t fully disclose the deductions and loopholes he intends to alter. However, as discussed below, there are provisions in Trump’s plan that disfavor many who are wealthy.

Nonetheless, early analyses of Trump’s plan suggest that, on balance, the rich will win (though they won’t get to send in a postcard declaring victory). Steve Gill, a tax and accounting professor at San Diego State University, said his quick calculation found that as a group, Americans making more than $200,000 a year would pay $400 billion to $500 billion less in taxes under Trump’s plan. Similarly, Michael Strain of the American Enterprise Institute says “the rich love this plan.” He calls Trump’s plan “not serious.”

In principle, lower taxes on the wealthy are fine with me. But Kyle Pomerleau, an economist at the Tax Foundation which favors lower rates, says that Trump’s tax cuts could easily cost more than $7 trillion over the next decade.

Assuming that Trump wants to keep the debt crisis from substantially worsening, how will he make up for the lost revenue? He talks of cutting spending. However, he has also talked of significantly increasing military spending and of universal health insurance (which we are far from having now).

This means that Trump’s plan simply doesn’t add up unless one assumes a massive increase in the rate of economic growth. Trump has mentioned six percent growth — surely an unsustainable rate unless you’re Chinese and get to fake the numbers.

Trump’s plan would bring in some revenue by attempting to force the repatriation of companies’ overseas profits (he would offer a 10 percent rate to soften the blow). President Obama also favors this approach.

I think I agree with Kevin Williamson that forced repatriation is unfair (by what right does the U.S. take a cut when a U.S. company builds something in Asia and sells it in Europe) and misguided (it will create another incentive for U.S. firms to move abroad). In any event, “repatriation” and Trump’s vaunted tax increase on hedge funds and private equity firms will not raise the kind of money needed to make Trump’s plan anything close to revenue neutral.

As a political document, Trump’s plan purports to offer more breaks than his competitors do. This suggests to me that it is somewhat less serious than rival plans.
http://www.powerlineblog.com/archives/2015/09/trumps-tax-plan-outbids-his-rivials.php

Powerline Blog is not a credible source of political information, especially when it comes to Trump. They all hate Trump. In 2012 they spent their time lecturing conservatives on why Mitt Romney was a winner and would win the election against Obama. They like Karl Rove still think that Romney really won.

The analysis you copied from these non-conservative conservatives sounds just like what all the liberals say about conservative republican tax plans. It admits its very similar to the the plans offered by the establishment candidates they support (Bush and Rubio) and the biggest jab they make is that Trump has a 1% or 2% greater reduction in the marginal tax rates.

Also, by quoting this analysis you are now admitting that I was absolutely correct when I stated up thread that Trump’s plan lowers taxes for everyone including the rich. You claimed to completely fail to understand this point in your prior posts and denied it was true that the rich got a tax cut also. You were still posting that it was tax the rich and give to the poor up thread. Now changing your tune on that with this post.

When you were claiming (falsely or incompetently) up thread that Trump’s plan was tax the rich and give to the poor, you claimed to “eviscerate” my post that Trump’s plan cut taxes for everyone. No you post an analysis that says exactly what I said.

“eviscerate”, you keep using that word but I don’t think it means what you think it means. Credit for this paraphrase to Princess Bride (the movie).

Rags is the Sicilian bad guy from Princess Bride. Spitting and hollaring “never go up against a sicilian when death is on the line” just before he keels over dead from drinking the poison.

But, gary, lying liar, T-rump himself said he was going to tax the “rich”.

Did you miss that, or are you simply lying again?

But, at any rate you lied about the conservative positions on taxation vis-a-vis T-rump’s non-serious proposal.

Here’s another one: no tax system that does not dismantle a corrupt, oppressive super-bureaucracy can be moral or consistent with small government and conservatism.

If you’ve been listening to Rush, you’ll have heard him gutting the T-rump plan…gently.

And, Bernie Butt Boi, we know YOU are not a conservative, and you’ve declare it! YOU are in line with Sanders regarding the free market.

“In 2012 they spent their time lecturing conservatives on why Mitt Romney was a winner and would win the election against Obama. They like Karl Rove still think that Romney really won.”

Ragzini, do your own research. I read the powerline blog every day for years until about a month or so ago when I couldn’t take their Trump derangement syndrome any longer. Hinderaker, the guy you quoted from, was especially big on old Mitt Romney in 2012. You can look it up on their blog all you want.

What a lying SOS!

And he has Ragbrain’s long-winded debating style, and his bald pate as well.

and down. I’m actually very succint. You lying SOS.

Vizzini, yes that is it. Loved seeing that scene again from the movie.

Maybe from now on we should refer to Rags as Ragzini in honor of his superior intellect that allows him to “eviscerate” those who oppose him just like the great Vizzini from Princess Bride.

Two liars calling me names. How will I bear up?

You can learn something about the wonders of market economics and why conservatives support the idea!!!

Gee I thought comments on this post would be dead by now but here’s the little guy who pretends to be a conservative clutching his tiny flagella and still beating on the horse, trying to get it to get up and charge Trump!