My appearance on the Todd Herman Show 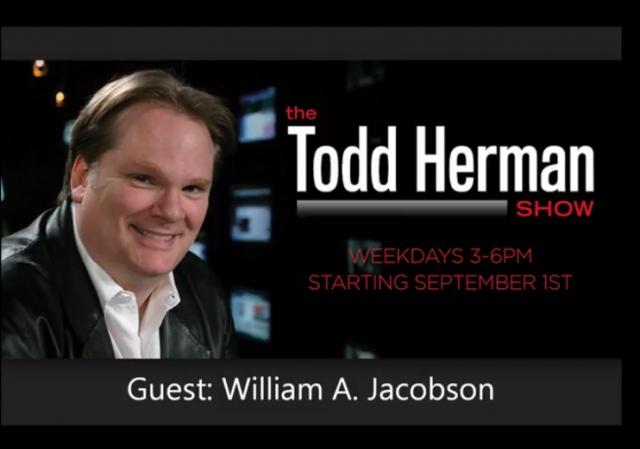 Todd is a frequent reader of Legal Insurrection, and I appreciated his many compliments.

“In this case, their entire theory of probable cause was legally invalid, and it was so held by the Wisconsin Supreme Court…. They were trying to find a crime….

[T]he chief of the KGB under Stalin had a very famous quote: Find me the man, and I will find you the crime. And that’s what this was. They wanted to get Scott Walker, and they spent four years looking for a crime, and that’s not what’s supposed to happen in this country….

This was meant to get Scott Walker. They couldn’t have cared less what some conservative activist was doing unless they could pin it on Walker.”

“I’m a fan of his, because he just quietly went about his business and completely eviscerated the public sector union movement.

Public sector unions are not like private unions, where you have a legitimate bargaining between a company and a private sector union. When it’s a public sector [union] it’s completely corrupted, they donate money to politicians, there’s never a real negotiation, and they essentially become a shadow government… And he broke that cycle, and he broke the back of the key fundraising mechanism for the Democratic Party in Wisconsin….

I’m a big fan of his type of conservative, somebody who doesn’t have to be flashy about it, but there’s nobody among the 17 people who has accomplished, who has given the body blow to the left-wing movement in the U.S. like he has.”

“He just, as many of the others, has not dealt very well with the Trump phenomenon, with Trump essentially taking all the oxygen out of the room, and I think he stumbled. He has not done a good job at that. Maybe he can’t translate it into a national platform and campaign, that’s something he and his people are going to have to figure out….”

I also would observe that Walker adapt very well to threats, and that he can be taught.

He also, like Perry, seems to understand and apply market economics to very good effect.

Unlike certain other people…

Walker would do well to build a big narrative around the public union ongoing problem. It could include the Lois Lerner things, the $100B burden in IL (worst in the country credit rating), and some colorful stories of these thugs invading people’s homes and telling them they can’t call even their lawyer.

Public unions and their bureaucratic moles are domestic public enemy number one. But for me, Walker also has to take on the immigration thing more strongly. He told the illegal Dad that we are a nation of laws, but he hasn’t said what he would do except close the border. The 30 million he leaves in limbo.

Walker backed off his statement that we need to end the (400,000/yr) anchor baby reward for illegals. That indicates to me, he won’t “break up” this family, he won’t send the illegal Dad back, or even require e-verify and a worker status without citizenship (he does say “no amnesty”, fwiw). The last I heard, he said the 11 million would be for a future congress/president to decide.

Maybe he could point to the greatest (largely illegal) migration of people from one region in our history, and the fact that they are mostly on welfare from day one, so we need a break. We are not a nation of immigrants, most are steeped in generations of American heritage … even the founders were not immigrants.

Trump is actually fairly squishy on immigration, except that he would control the border, and have a great big beautiful door, and he has a very big heart. So any that can take on more of the Coulter message, that we don’t need to rapidly transform America into some other country, would rise in the polls. Play for the American vote, instead of hoping to mollify future Hispanics.

And I’d rather hear Walker use his Madison location to preach some James Madison federalist fervor, instead of old Kohl’s stories. The founders made America great, not Trump towers. Scott has spoken of recognizing states’ rights more, but needs to relate that to emotional decisions (that poll well).

anyway … I’m just trying to throw out some ideas from the hinterlands, but I’m not a strategist or a billionaire. 🙂

Much as I like Walker he needs to quit waffling on anchor babies. Because of his prior support for Amnesty any weakness on his ‘new’ position looks bad.

I hope he can hang in there so more people can take a closer look and come to appreciate how strong he was/is in taking on the entrenched left.