“Confrontation and friction are not the right choice” 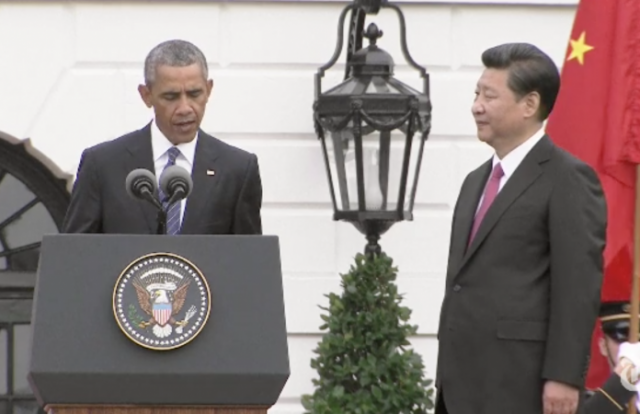 As more details of the massive Office of Personnel Management (OPM) hack are made public, China’s likely roll in the unprecedented hack is increasingly difficult to ignore.

In July, Amy explored why China is at least for official purposes, off the the hook for the OPM hack.

Citing concerns over national security, the Obama Administration has decided that they will not publicly blame China for the hack, even though conventional wisdom (and a fair amount of now-public evidence) suggests that they were responsible. Officials fear that coming out in an official capacity against Beijing will compromise what evidence investigators have been able to assemble.

“We have chosen not to make any official assertions about attribution at this point,” said a senior administration official, despite the widely held conviction that Beijing was responsible. The official cited factors including concern that making a public case against China could require exposing details of the United States’ own espionage and cyberspace capabilities. The official was among several who spoke on the condition of anonymity to describe internal deliberations.

U.S. officials stressed that the administration has not ruled out economic sanctions or other punitive measures for the OPM breach. “We’re still teeing up options” for Obama and his national security team, a second U.S. official said.

The senior administration official said that the government could impose new sanctions on China without publicly linking it to the attack, and “then send a private message that said, ‘Oh, and by the way, part of the reason for this is OPM.’ ”

The administration has not publicly or officially blamed China for the attack, but during Chinese President Xi JinPing’s White House visit, President Obama made note of cybertheft.

The New York Times reports both leaders agreed to curb cybertheft, but cyberespionage was conspicuously absent from the discussion:

WASHINGTON — President Obama said Friday that he had reached a “common understanding” with President Xi Jinping of China to combat “cyber-enabled theft of intellectual property,” but made it clear that wide areas of disagreement remained over how to stop an escalation of Chinese cyberthefts and the possibility of an American response.

With Mr. Xi standing beside him at a Rose Garden news conference, Mr. Obama referred to the cyberattacks against American targets and said, “I indicated it has to stop.” But he also hailed progress with China on climate change and the nuclear accord with Iran, and said that both he and Mr. Xi were committed to pressing ahead against the North Korean nuclear problem, which has defied solution for more than 20 years.

But both Mr. Obama and Mr. Xi made an effort to demonstrate that the two countries had made progress on curbing cyberattacks, even while skirting direct references to some of the most contentious issues, including the American claim that China was behind the theft of security dossiers on roughly 22 million Americans from the Office of Personnel Management.

“Confrontation and friction are not the right choice,” Mr. Xi said.

A joint statement issued by the White House indicated that the two leaders had agreed that “neither country’s government will conduct or knowingly support cyber-enabled theft of intellectual property, including trade secrets or other confidential business information, with the intent of providing competitive advantages to companies or commercial sectors.” Mr. Xi repeated those words, but said nothing of cyberespionage.

Why do you suppose China is feverishly building up those man-made islands in key sea lanes in the South China Sea? Why do you think Putin is readying for another push into Ukraine? Why do the Iranians dare taunt the world and Israel and threaten to violate their nuke deal before they’ve received their frozen assets?

We’re not the only ones counting the days – 482 today, btw – until we’re rid of Obama. In the meantime, the bad actors know they can misbehave with impunity until a new President takes the oath.

Obama’s a spineless, faithless worm, a weasel and a coward – and our enemies all know it.