The house is rigged! 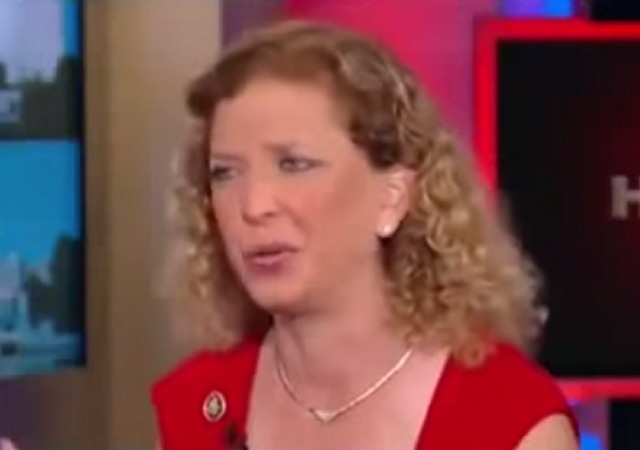 Democrats are unhappy with the way their party officials are handling this election cycle—and the party doesn’t mind one bit.

Democratic National Committee Chair Debbie Wasserman Schultz has come under fire repeatedly for the way she’s managing her flock of potential presidential candidates. In addition to sanctioning just six official debates, DWS has limited the potential for rogue forums by creating a new rule: if a Democrat chooses to participate in a non-sanctioned debate, they’ll be banned from future sanctioned ones. During a media breakfast hosted by the Christian Science Monitor, she doubled down on the new rules:

“We’re not changing the process. We’re having six debates,” said Wasserman Schultz, who has been under fire from several Democratic presidential candidates over the debates. “The candidates will be uninvited from subsequent debates if they accept an invitation to anything outside of the six sanctioned debates.”

…
“Every day someone is going to say something about my intentions, but I have a party to run,” Wasserman Schultz said. “I have to simultaneously make sure that we’re getting ready to make sure the party is prepared to support our eventual nominee, and at the same time manage a neutral primary nominating process, which I’m going to do. I’ll make decisions that will make some people happy and some people unhappy. I can’t worry about that.”

Perhaps she should worry, considering she’s facing an internal revolt. DNC Vice Chairs Rep. Tulsi Gabbard (D., Hawaii) and R.T. Rybak released a joint statement yesterday asking DWS to revoke the sanctioned debates only-rule, saying that it would be a mistake to limit discussion amongst the candidates.

The candidates themselves (or, at least two of them,) agree with Gabbard and Rybak. Former Maryland Governor and presidential candidate Martin O’Malley already has a strained relationship with DWS, and he hasn’t been shy about calling her out. He appeared on MSNBC’s Morning Joe this morning and went to the mattresses over what he believes is a concerted effort to rig the primary for Hillary Clinton:

Host Joe Scarborough asked O’Malley if he thought the party elites were purposefully rigging the primary for Hillary Clinton. O’Malley answered he believed one person in particular was responsible for favoring the frontrunner.

“I do … I’m told that this is the prerogative of the chair,” O’Malley said. “There’s always an inclination I think for old relationships to kind of circle the wagons and protect one another.”

“And tell our viewers who the chair is?” Scarborough asked wryly.

Despite being way behind in the polls, O’Malley insisted voters are rejecting the “anointed” Clinton and will turn to him for a new alternative.

“People are actually looking for a new leader. Right now they are expressing their repudiation of the established, anointed, coronated leader,” O’Malley said. “We can’t be dissatisfied with our economy and politics and think old leaders will fix what’s wrong with our country.”

How else are they gonna get the Clintons back in the White House?

Circling the wagons to protect and prop up Hillary? Or just to watch her campaign implode?

Just throw water on her and she will melt.