The rights of a government employee vs. those of a private citizen 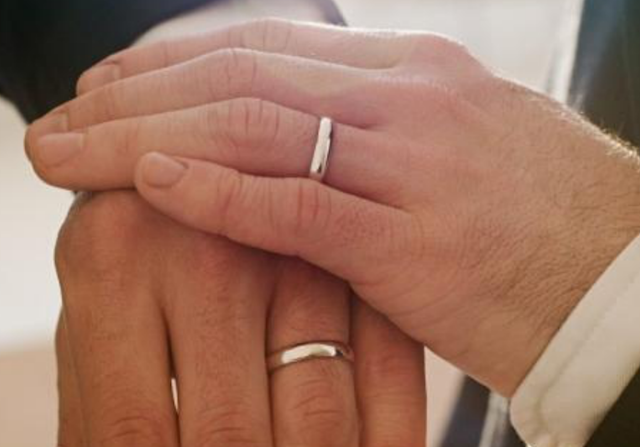 In Kentucky, a county clerk refusing to issue same-sex marriage licenses despite the Supreme Court’s recent ruling has made her way into national headlines. Rowan County Clerk Kim Davis claims her religious beliefs have created an issue of conscience which prohibits her from participating in or condoning gay marriage. Citing God’s authority, Davis has stopped issuing all marriage licenses.

The whole affair turned into one horrid media circus:

April Miller and Karen Roberts, tailed by television cameras and rival activists, were there when the doors opened Tuesday morning, hours after the Supreme Court rejected the clerk’s last-ditch request for a delay.

They hoped Davis would accept that her fight was lost and issue the licenses, ending the months-long controversy that has divided Rowan County, where the seat of Morehead is considered a progressive haven in Appalachian Kentucky.

Instead, Davis once again turned them away. On their way out, Miller and Roberts passed David Ermold and David Moore, 17 years a couple. “Denied again,” Roberts whispered in Moore’s ear.

Ermold said he almost wept. They demanded to talk to Davis, who emerged briefly on the other side of the counter.

“We’re not leaving until we have a license,” Ermold told her.

“Then you’re going to have a long day,” Davis replied.

Davis, an Apostolic Christian, stopped issuing all marriage licenses in June rather than comply with the Supreme Court’s legalization of gay marriage nationwide.

Gay and straight couples sued, saying she should fulfill her duties as an elected official despite her personal religious faith. U.S. District Judge David Bunning ordered her to issue the licenses, an appeals court affirmed that order, and the Supreme Court on Monday refused to intervene, leaving her no legal option to refuse.

And yet, she did.

CNN reports a Kentucky judge has called for a hearing to be held at 11:00 AM Thursday.

Davis is not the only individual protesting gay marriage though. Fellow Clerk, Casey Davis, has joined the cause citing first amendment justifications as refusal to carry out the law.

A fellow Kentucky clerk, Casey Davis, has protested alongside Kim Davis and insisted Tuesday on CNN’s “New Day” that “we’ve not tried to prevent” same-sex marriages, and “we’ve only tried to exercise our First Amendment rights.”

Casey Davis said gay couples could go to another county to get married when a county clerk objects due to religious beliefs.

“There was a lot of people that died for that right and I think we should be able to exercise it,” Davis told CNN’s Alisyn Camerota.

Casey Davis is now riding his bicycle from Louisville, Kentucky to the West coast to raise awareness for what he described as an assault on religious liberty.

In Court papers, lawyers for Kim Davis said that her “conscience forbids her from approving a (same-sex marriage) license — because the prescribed form mandates that she authorize the proposed union and issue a license bearing her own name and imprimatur.”

“In her belief,” the lawyers wrote, same-sex marriage “is not, in fact, marriage.”

They said issuing a same-sex license would amount to a “searing act of validation” that would “forever echo in her conscience.”

Do first amendment rights allow government employees the opportunity to cherry pick the laws they dispense?

Indicating she believed Davis’ acts to be inappropriate, Fiorina made an important distinction: Davis is a government employee and therefore, her sole purpose is to function as part of the government. Were Davis’ conscience based protest in the context of a private business though, the situation would certainly call into question, and appropriately so, religious liberties.

“First, I think that we must protect religious liberties with great passion and be willing to expend a lot of political capital to do so now because it’s clear religious liberty is under assault in many, many ways,” said Fiorina. “Having said that, when you are a government employee, I think you take on a different role. When you are a government employee as opposed to an employee of say another kind of organization, in essence, you are agreeing to act as an arm of the government.”

Clarifying her position on the Supreme Court’s recent gay marriage decision, Fiorina explained, “while I disagree with the Supreme Court decision, their actions are clear. I think in this particular case, this woman now needs to make a decision of conscience. Is she prepared to continue to work for the government, be paid by the government, in which case she needs to execute the government’s will, or does she feel so strongly about this that she wants to sever her employment with the government and go seek employment elsewhere where her religious liberties will be paramount over her duties as a government employee.”

Fiorina articulates the argument well and on this matter, I completely agree. It would seem we’re not the only ones either. Justice Scalia made the same argument in 2002, though obviously not in direct response to the Davis/Kentucky kerfuffle.

Davis has a right to observe and adhere to her religious beliefs, but she does not have a right to her job as county clerk. The latter obligates her to follow federal law, including the applicable judgments of federal courts, and it is now the law of the land that the Constitution bars state governments from refusing to recognize same-sex marriages on equal terms with opposite-sex marriages. If, as Davis claims, her religious convictions bar her from issuing such a marriage license, she should resign.

Now Scalia has not, to my knowledge, said anything directly about Davis’s actions, but he has addressed the question of what public officials should do when their official obligations conflict with their religious conscience. Writing in “First Things” in 2002, Scalia explained that if he were to conclude that the death penalty is fundamentally immoral, he should no longer serve on the bench.

[W]hile my views on the morality of the death penalty have nothing to do with how I vote as a judge, they have a lot to do with whether I can or should be a judge at all. To put the point in the blunt terms employed by Justice Harold Blackmun towards the end of his career on the bench, when he announced that he would henceforth vote (as Justices William Brennan and Thurgood Marshall had previously done) to overturn all death sentences, when I sit on a Court that reviews and affirms capital convictions, I am part of “the machinery of death.” My vote, when joined with at least four others, is, in most cases, the last step that permits an execution to proceed. I could not take part in that process if I believed what was being done to be immoral. . . .

[I]n my view the choice for the judge who believes the death penalty to be immoral is resignation, rather than simply ignoring duly enacted, constitutional laws and sabotaging death penalty cases. He has, after all, taken an oath to apply the laws and has been given no power to supplant them with rules of his own. Of course if he feels strongly enough he can go beyond mere resignation and lead a political campaign to abolish the death penalty” and if that fails, lead a revolution. But rewrite the laws he cannot do.

Davis is in a similar position. Her official position obligates her to take part in the state’s licensing and recognition of marriages. Insofar as the state’s definition of an acceptable marriage differs from her own, Davis is obligated to follow the state’s rule so long as she maintains her current office.

Think of it this way. Someone who objects to war due to his religious conscience has a right to be a conscientious objector and not serve in the military, even were there to be a draft. But he does not have the right to serve as a military officer, draw a paycheck from the military and then substitute his own personal views of when war is justified for that of the government. The same applies here.

As Fiorina pointed out, if Davis feels so strongly about the issue that she cannot carry out the duties required by government employment, she ought to consider employment elsewhere.

I’m a Christian. I love God with all my heart and soul. But I think Ms. Davis is misguided and in the wrong.

To tell you the truth, it’s hard for me to understand how&why some people are homosexual, but even though I don’t understand it, I must treat them with love, respect, and equality.

Many anti-gay Christians claim that they’re standing up for what the Bible says. But if so, then don’t they have to be against divorce as well? (except in the case of sexual immorality…)

10 To the married I give this command (not I, but the Lord): A wife must not separate from her husband. 11 But if she does, she must remain unmarried or else be reconciled to her husband. And a husband must not divorce his wife.

Why don’t we hear a strong outcry for banning divorce from the same Christian crowd? (I am neither anti-gay nor anti-divorce, since I don’t believe in biblical inerrancy.)

What if a devout Catholic holds the same job as Ms. Davis and not only refuses to issue a divorce certificate but also instructs everyone else in his/her office not to issue it … would that be okay?

If I get my own way, strip clubs shouldn’t exist. Should I be able to not grant business licenses to those types of places, and also book stores that carry Playboy magazine and the likes, if I was a city/county clerk?

If she felt that she couldn’t in good conscience carry out her duties, the noble move would have been to give up 80k salary and resign.