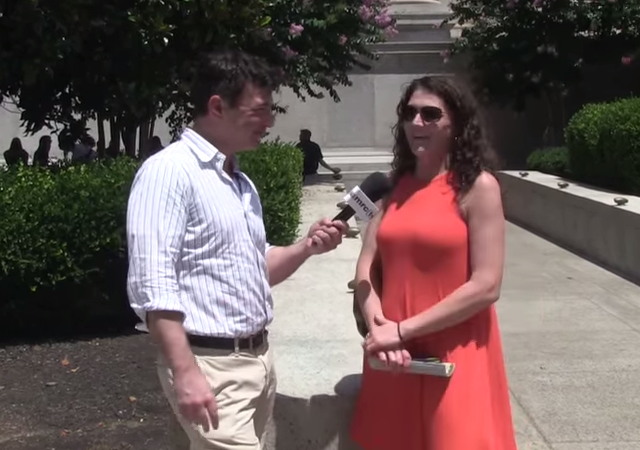 Dan Joseph of MRCTV has released a new video which is as maddening as it is humorous. Joseph interviews a bunch of people and asks them to list the rights guaranteed by the First Amendment and almost everyone struggles to name them.

Here’s the best part, he’s interviewing people who have just come out of the National Archive Building in Washington, DC which, you know, houses the original Bill of Rights.

From the MRCTV blog:

The First Amendment is the foundation on which our entire nation was built. Without it, America as we know it would cease to exist. So, you would think that Americans would be able to name at least a few of the basic rights guaranteed by the most important section of the Bill of Rights.

In our latest video, MRCTV proves that many Americans have an incredibly limited knowledge of the First Amendment – and some people actually don’t have any.

I know that Legal Insurrection readers are more well informed than most people, but for the sake of everyone else, here’s the First Amendment:

We shouldn’t be surprised by any of this. There are even judges who don’t understand the First Amendment.

I recently had a fantastic conversation with a woman who thinks that Nancy Pelosi is absolutely right to give 16 year-olds the vote “because they are so much smarter than their parents.” She was thrilled with the “civics” being taught to the children, and how they “know so much more than their parents.”

No kidding, she said it twice. She said the local high schools are excellent. My kids went to the highest-rated high school in the area, and I know what they got taught, as far as “civics” is concerned. They got some big lessons in the meaning of the terms “arbitrary and capricious” and “martinet.”

She was a teacher.

California ranks in the bottom half, below Texas and Maryland, two states where I have pertinent and recent information.
http://www.parentsunited.org/press-releases/report-card-on-american-education-ranking-state-k-12-performance-progress-and-reform-january-26-2012-5/

I’ve known and retained the five rights contained in the first amendment since 2nd grade (1958). They thought it important enough to teach it to us back then and our memory was refreshed several times going through elementary school.

I realize a lot of adults are pretty ignorant, but I have found that if I ask a group of adults a civics or history type question, the younger ones have no clue and the older ones either know or can make an educated guess.

Way back in 1988 when Bush senior was running for president, the trivia question came up at work: who was the last sitting vice-president to be elected president? Everyone younger than me said they didn’t know. Everyone my age or older tried to figure it out by going backwards through the presidents. They didn’t all get it, but they tried to figure it out and several did get it (Martin van Buren).

Remember that one of the standard lines we get from educators these days is that they don’t waste time on useless memorization – instead, they teach kids HOW to think! Well, you can have a top of the line processor (not that they do) but if your hard drive is empty, it doesn’t do much good.

No surprise, they cannot even find their own state on a map.

This gentleman here is 100% correct. What has standing in front of the National Archives got do with freedom of the press? Are you printing something there?

(Even if you were, you still wouldn’t have that right, since it’s not your property. The freedom of the press only applies to your press, standing on your property, using your paper and ink. You have no right to run a press on my property, or on the National Archives’ property.)

All the people who downvoted this comment have just shown that they are ignorant and incompetent. What I wrote is not my opinion, it is undisputed fact. Freedom of the press means that anyone who owns a press has the right to operate it, on his own property, using his own supplies, for whatever purpose he likes. It does not mean that members of a certain trade are singled out for a special freedom to do whatever they like. Only ignorant people and journalists (but I repeat myself) imagine that.

Freedom of the press means that anyone who owns a press has the right to operate it, on his own property, using his own supplies

Nonsense. There is no requirement that one own one’s own press; one’s freedom to report is not limited to doing so on one’s own property; and one is not required to use one’s own supplies.

For instance: An ordinary citizen may film or liveblog something that is happening anywhere they have a legal right to be, and upload on the spot it to social media or a blog via a medium like Twitter, Instagram or Persicope.

They might not be an officially-recognized “member of the press” (whatever that means anymore); they may not actually own the tools they’re using for reportage; they may be in the public square rather than on their own property; and they may be using freely-available open-source supplies…. but the First Amendment guarantee of “freedom of the press” still applies to them.

His right to be there was the same as anyone else’s — by permission of the property owner, and subject to the owner’s rules, which presumably include not setting up a print shop right there.

He’s right, you know. There is no “freedom to report”. The “freedom of the press” clause is not about news-gathering or reporting. It’s there because of the Zenger case, and Zenger was not a reporter, he was a printer. It’s there because in almost every country at the time the use of the press was not free; printing was strictly regulated. It was illegal to print anything without the government censor’s approval. Books, pamphlets, posters, song lyrics, all had to toe the government line. And newspapers, but they were not the main thing on the framers’ minds, and to the extent they did think of newspapers it was in the same context: they were protecting the freedom to physically print them, not to gather the information they contained. The idea that journalists were to constitute a sort of “fourth estate” was the farthest thing from their minds. They were getting rid of the first three estates, not establishing a new one!

“The freedom of the press only applies to your press, standing on your property, using your paper and ink. You have no right to run a press on my property, or on the National Archives’ property.”

😀 This guy is a master! lolololol 😀

Funny, you don’t look like a press. You look like a person to me, a person with exactly the same freedoms that I do, no more and no less. How arrogant do you have to be to think that you are singled out by the constitution for special privileges?

How very libertarian of you… 😎

Yes, it is libertarian. If you think, as this person does, that he is a press, and is singled out by the constitution for special privileges, then you are an idiotarian.

We are all the press.

No, we are not. A press is an apparatus, not a person. We all have the freedom to use a press, if we have one. The person in the video was pointing to himself and claiming that he was “the press” that the “freedom” applies to. He demonstrated that he was no more familiar with the first amendment than the people whose ignorance he was supposedly showing up.

Just to help burgeoning libertarian Milhouse out a little bit here:
Freedom of the Press Belongs to Everyone

You have no idea how old I am.

No, we have no idea how old you are, year wise.

All some of can deduce from your comments however, is that your intellectual development apparently stopped about the time you turned 12.

Of course it does. That is precisely what I wrote, and what you disagreed with. You agree with the arrogant pig in the video that he is a press, and that the “freedom of the press” in the first amendment refers to him and the people he works with, granting them special privileges that nobody else has. He is wrong, and you are wrong, as Sullum so eloquently explains. That you thought this link would refute me shows what an idiot you are, as are all those trolls who downvoted my comments.

We are all the press.

No, we are not. Nor are we religions, speeches, assemblies, petitions, or arms. We have the freedom to exercise our religions, speak or publish our words, assemble together with like-minded people, present the government with our petitions, and bear our arms, but we are not those things.

So all we’re entitled to is a ‘free press’?

Meaning I can just go to a press manufacturer and get one for the asking?

Your literalism expounds that. So, I get from that literalism that amendment the second means only our upper limbs are what’s being mentioned.

Don’t expect not to get trolled when your inane comments appear as such.

So all we’re entitled to is a ‘free press’? Meaning I can just go to a press manufacturer and get one for the asking?

You must be incapable of reading English, if you drew that conclusion after I have written at least three times the exact opposite. No, we are not entitled to a free press, any more than we’re entitled to a free gun, a free place in which to assemble, a free seat in the church of our choice, etc.

What we have is the freedom to excercise our religion, to express ourselves whether by speech or by publication, to gather together, to petition the government, and to bear arms, provided we have the means to do so, including a place in which to do so. Nobody, including the government, has to give us anything.

PS: You must really be incapable of understanding English if you think the first amendment says anything about a free press. It does not. It protects the freedom of the press, not a “free press”. It makes no sense for presses to be free, since they are inanimate objects. Presses have no freedom and no need for it; we have the freedom to use them.

But, then I conclude we only have the freedom to use ‘presses’?

No other instrumentality, in your august opinion, can be covered!

I also have to conclude that these presses must be of the actual T handle turn type as well, must I not? I mean, that’s the only thing a true ‘press’ is, isn’t it?