The drama, the candidates, the selfies 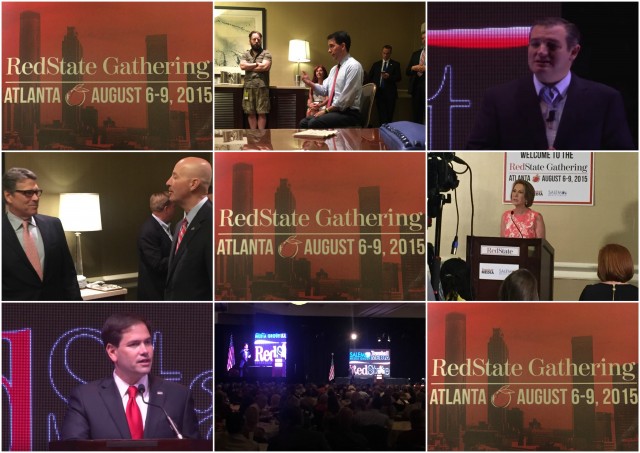 The seventh installment of RedState’s annual conference concluded Sunday morning. 700 conservative activists from far and wide descended upon the Intercontinental Hotel in Atlanta, Georgia. RedState Gathering was two and a half fun-filled days of high profile Republican speakers, bourbon, drama, and turkey sandwiches.

Most of the Republican Presidential field attended. After current GOP front-runner Donald Trump was uninvited to a reception at which he was scheduled to speak Saturday evening, the conference found its way into national headlines.

As we reported early Saturday morning, outgoing RedState Editor in Chief Erick Erickson uninvited Donald Trump. Remarks Trump make during an interview with CNN were, “a bridge to far,” according to Erickson.

Many attendees at the RedState Gathering wanted to hear from Donald Trump in person, but they think Erick Erickson was right to disinvite him from speaking at the event.

…Many in the audience told the Washington Examiner they did not come to see Trump, and would have attended regardless of whether or not he was scheduled to appear. One woman, who declined to provide her name because she said she did not want to be on the record criticizing Trump, was furious with Trump and said “enough is enough.”

Many others, mostly male, seemed ambivalent about Trump’s departure.

Lance Walker, a RedState attendee, told the Washington Examiner he was not saddened about missing Trump at RedState.

“I think it’s probably appropriate [to rescind Trump’s invitation], just in terms of this is Erick’s gathering, he feels pretty strongly about it, and I think most people would agree,” Walker said. “He [Trump] says a lot of things, taps into an undercurrent, but I think the other candidates say the same things but do not get the same attention.”

Frank Corrick, an attendee from Athens, Ga., said he registered to attend long before Trump announced his intention to visit the gathering. He added, “I’d like to see him, but it’s not my show.”

A few vocal Trump supporters also turned out for the RedState Gathering this weekend, despite Trump’s absence. Michael Pemberton, a RedState attendee, wore a makeshift sign that read “I am Donald Trump.” He said his sign was modeled after the “Je suis Charlie” response to the Charlie Hebdo massacre in Paris, France. For Pemberton, RedState’s rescinding of Trump’s invitation bore some resemblance to the Charlie Hebdo massacre.

He seemed intent on proving his devotion to being politically incorrect.

“I’ve never been sexually harassed by the way,” Pemberton said in response to a question about Trump’s absence. “There’s several women here that I would be glad to have harass me sexually, but I can’t accommodate. I’m taken.”

Littered with profanity and disparaging remarks, attendees ooo-ed, awwww-ed, and boooo-ed as Erickson read a sampling of pro-Trump hate mail Saturday afternoon. “These are not the people I ever want at a RedState event,” said Erickson.

Every Republican presidential hopeful who spoke was well received by conference goers. Some were more engaging than others, but all received standing ovations at the conclusion of their speeches. Sen. Cruz, Gov. Walker, Gov. Perry, and Sen. Rubio evoked the most enthusiasm from the audience.

Even those bearing the scarlet “E” of the dreaded “establishment” were greeted with ample fan fair. Governor Jeb Bush began a little stiff, but found his footing about midway through his speech. He spoke extensively and specifically about immigration reform and handled audience questions with direct, and often humorous poise.

We took the opportunity to focus on three candidates.

Carly Fiorina would not address Donald Trump; focused on her own campaign

A coral-clad Fiorina had the crowd on their feet from the get go.

“Progressives don’t believe that no one of us is any better than any other one of us. In fact, if you look at their policies, if you look at how they talk about things, how they talk about people, whether it’s what they’re doing to defend Planned Parenthood or how they continue to support the teacher’s unions, no matter what they say, the core message is this — some of us are smarter than others, some of us are better than others, some of you can’t really live lives of dignity, purpose, and meaning, and don’t worry, some of us are going to take care of the rest of you. It is the height of disrespect and disregard and it is the fight we must have in 2016,” she began. 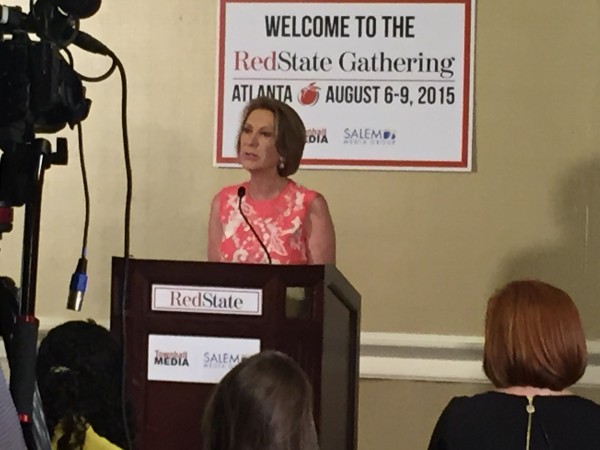 At a press conference following her speech on the main stage Friday afternoon, Fiorina was asked to comment on Donald Trump. Fiorina refused, redirected focus to her campaign, and said her time, attention, and efforts were being spent earning the job, not on what other candidates were doing.

Consensus on Fiorina? Those who have heard her want to hear more.

RedState goers signaled their support of Perry’s message by offering four mid-speech standing ovations. Distinct from other Republican candidates, Perry’s message is one of unity.

“The most consequential president that this country ever had — he was a man who transcended the pettiness of his time in order to preserve this union. Abraham Lincoln turned to scripture when he declared that a house divided against itself cannot stand,” Perry said. “He rose above the pettiness for the sake of the greater good.”

“He could’ve spoke as a conqueror, but he chose to speak as a healer. Lincoln set out to bind wounds of this nation declaring malice towards none with charity for all. Today we have another president from Illinois in the White House and that’s about where the similarities end,” quipped Perry. “He has become a divider in chief, slicing and dicing this electorate… After the trouncing that his party took in 2014, he offered a closed fist instead of an open hand.”

“This presidency has become the imperial petulancy. He has become our nation’s chief cynic, demonizing the opposition at every turn, seeking political advantage instead of consensus.”

“We don’t have to resign ourselves to debt, decay, and slow growth. We have the power to make things new again, to project America’s strength again, to get our economy going again… We don’t have to apologize for American exceptionalism or Western culture.”

Following Perry’s speech on the main stage, we were able to spend a little time with the former Texas Governor and Nebraska’s Governor Pete Ricketts. 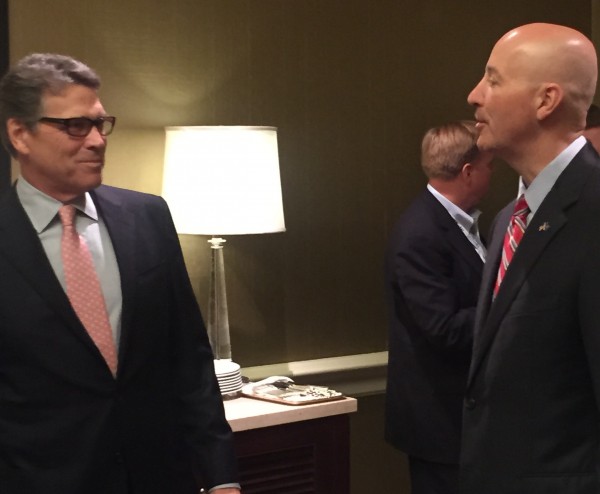 The good Governor from Texas also has fantastic taste in eyewear, if I do say so myself. 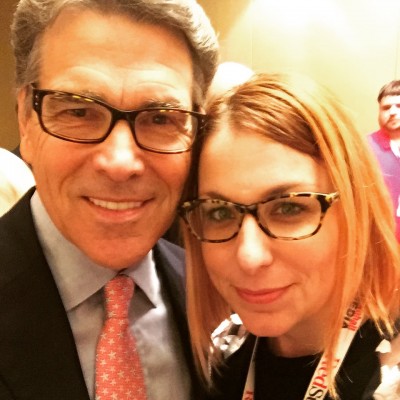 Governor Walker riles up the crowd

Governor Walker closed out RedState Gathering as the last speaker Saturday evening. He amped up his performance and attendees matched his enthusiasm.

Prior to taking the stage, we met with Governor Walker where he shared that his focus would not be on other Republican candidates, but on Hillary Clinton. That sentiment was reflected in the Wisconsin Governor’s opening line. “We need to remind the American people as bad as things are with this president, they’d be much worse if there was a President Hillary Clinton. We cannot let that happen,” said Walker. 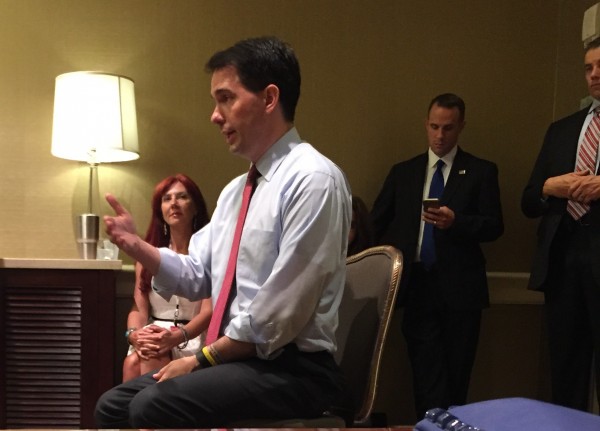 Gracious to his fellow Republicans, Walker described the GOP presidential field as, “some of the best we’ve had since 1980,” while reiterating Hillary Clinton was the opponent to beat.

The only male candidate to do so, Governor Walker opted to forgo the suit jacket and roll up his sleeves. He also wore a FitBit. But that is Governor Walker — down to earth, hard-working, genuine, and unwaveringly focused on beating the opposition on the merits, on all fronts. 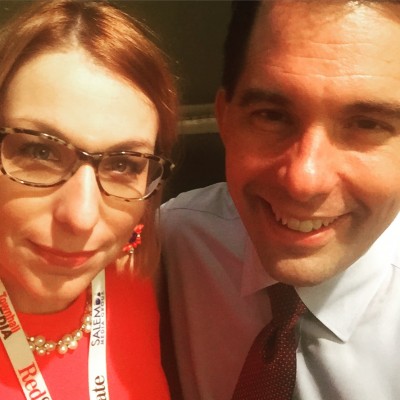 Governor Walker was one of the only candidates to speak to their digital campaign efforts. Having a solid understanding of how President Obama’s campaign utilized digital platforms to mobilize and activate the grassroots, Walker expressed the desire to leverage the digital space as a means of maximizing voter contact.

Erik Erikson is small potatoes. He backs losers like Perry the first time. Erik Erikson is also far cruder and unreserved. He also said that Jeb Bush is the most conservative in the room. Now that Erik is a Christian, he should know better than to lie like that.

Dr. Carson was in Iowa Saturday, where he’d planned to be for some time. I think he’s still there today.

I went to RedState; it’s a nice Establishment hangout, no other points of view tolerated, enforced by banhammer. I’d call it PinkState, personally, as it’s not very conservative; but then I would greatly prefer some venue where all points of view were at least tolerated.

Getting hard to find such a venue, as the Cartel knows they’re in for a fight- well, they would be, but so far only from one candidate; that’s why he’s uninvited- can’t have another viewpoint, even from the frontrunner.

Who may yet flame out, that’s a possiblity; so why not have a level playing field until we find out? Too scary for Pinkstate, and for a lot of country club republicrats!

“Getting hard to find such a venue..”

I recommend Legal Insurrection. You won’t get banned either, unless you post something so ugly you’d agree with your own banning. Since 2011 I think I’ve seen maybe.. 3? 4?.. people banned at LI. Smetimes the professor will ban himself for a week or two, but he always comes back. It’s good to hold the God Account.

Erickson knows he is wiser than we, the unclean masses, therefore it is to him to select the Nominee.

I am almost glad they kicked me outta Red-State for opposing the Gay Marriage they won.