A video of an Israeli soldier near the West Bank village of Nabi Saleh being confronted by women and children is making the rounds. It has over a million views on Facebook alone. (Embedded towards end of this post.)

As you view the history below, don’t blame the children. They are victims of their family’s abuse which puts them in harms way for photo-ops. Were these children treated such a way in the U.S., there is no doubt that local family services agencies would be involved in preventing their dangerous exploitation by their parents.

In the current incident, the soldier, according to Israeli authorities, was in the process of detaining a member of the Tamimi clan of Nabi Saleh for stone throwing. Haaretz reports:

An Israeli soldier tried to detain a minor during clashes in the West Bank village of Nabi Saleh on Friday, but a number of Palestinian women and children managed to stop him.

According to the army, the youth was throwing stones at the troops, who did not realize he was a minor.

Photographs taken by Reuters and AFP show the soldier surrounded by women and children. In one of the images, a young girl is seen biting his hand.

The soldier was lightly wounded as a result of the altercation. The commander in the area decided to release the minor. The army said that one other Palestinian was detained in Friday’s clashes, along with one foreign activist.

Haaretz quotes left-wing Israeli activist Jonathan Pollak, who denies Israel even has a right to exist, as denying that there was stone throwing. The fact Pollak was present makes the whole incident suspect, in addition to the background of the Tamimi family.

Now, questions are being raised by The Daily Mail of Britain and others as to whether the current incident was deliberately provoked because Tamimi members were involved. The most famous photo shows a girl biting the hand of the Israeli soldier. That girl is Ahed Tamimi. 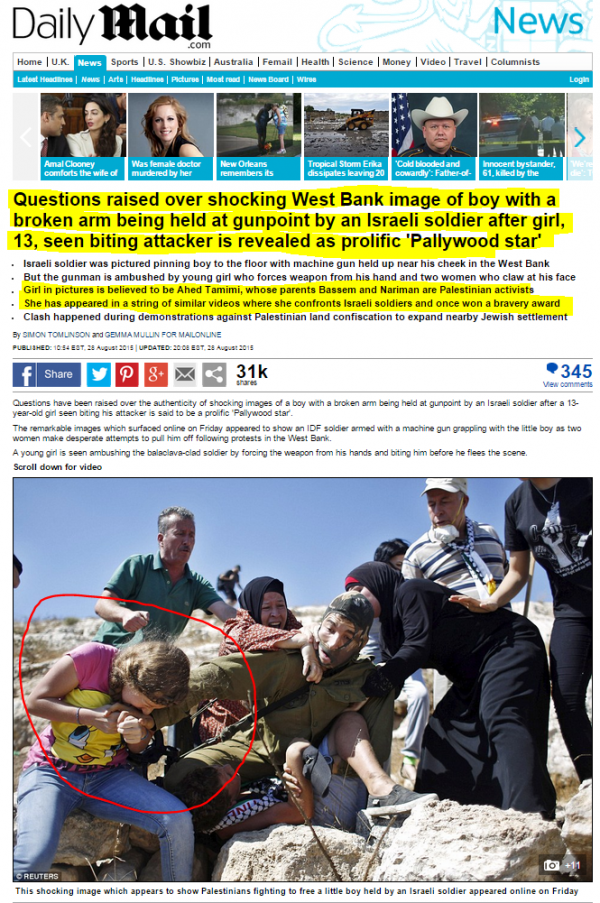 This coverage of the background of those in the photo was prompted by the Israelly Cool website, which has a screen shot of the original headline:

You may not recognize the name Ahed Tamimi or her father Bassem Tamimi, but you may recognize this video from 2012, which has several million of hits on YouTube (in various versions). The girl with the striking blond hair is Ahed Tamimi:

In what has become a Tamimi family specialty, the 2012 video was pure Pallywood. It actually happened, but it was provoked for the cameras in order to get viral video and photos:

The Blaze reported at the time:

A video captured on Friday in the West Bank village of Nabi Saleh unintentionally unmasked the way some Palestinians manipulate the media to broadcast unflattering images of Israeli soldiers. A young girl along with two other children spent many long minutes screaming and pushing IDF soldiers in an apparent attempt to provoke them into responding violently.

Disturbingly, they were egged on by two older teenage girls and, according to Israel’s Channel 2, were encouraged by one girl’s mother who filmed the entire episode even while she was inciting the kids. 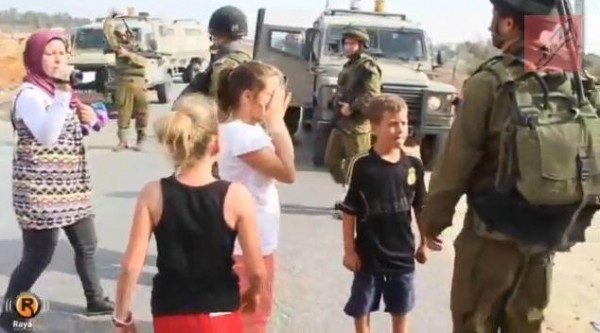 The girl shouts at the soldiers in Arabic: “You’re a traitor! I know you speak Arabic. Our soldiers are stronger than you! I’ll smash your head.” Continuing her tirade until she’s practically hoarse, she screams: “I spit in your face. Go watch your mother instead of fighting little children. You’re a traitor. You kill people to get money from dogs.”

There are dozens if not hundreds of photos available of Tamimi children and women being used this way. Ahed is a frequent star because of her striking appearance and ability to scream and cry on cue even when nothing has happened to her.

For the 2012 performance, Ahed received a medal from anti-Israel, anti-Semitic Turkish Prime Minister Recep Tayyip Erdogan, and a hero’s welcome in the Turkish media:

The boy, Mohammed, involved in the current incident, and his sister Ahed, are frequently pushed forward by their father, Bassem, who posts their images on Facebook and elsewhere (here, here, here, here, here (rock throwing) and here, just for examples).

Mohammed confronting soldiers was used in media campaigns even when he was much younger: 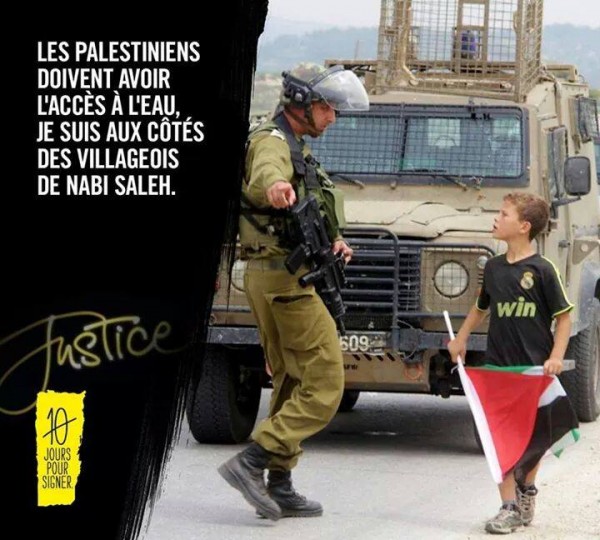 The Tamimi clan has a sophisticated media operation, including Tamimi press, which enables it to get its material out into the media with the help of other Palestinian and anti-Israel activist groups.  Ahed now a few years older, is a frequent media star, giving interviews to international media and activists:

When the Palestinians were trying to get Israel kicked out of FIFA, Ahed starred in photos giving Isareli soldiers a red card (via Israelly Cool). The photo is by the anti-Israel International Solidarity Movement, which helps organize many of these confrontations: 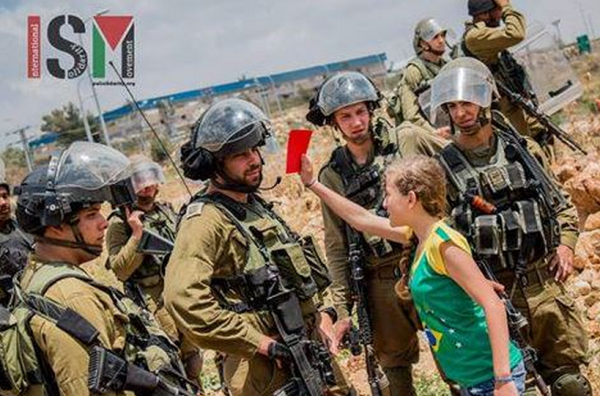 Nabi Saleh and The Tamimi clan are particularly notorious not just for their exploitation of children, but also for involvement in terror. Ahlam Tamimi, who helped implement the Sbarro Pizza restaurant bombing is a cousin of Bassem Tamimi. She was released in the Gilad Shalit prisoner exchange, and now is in Jordan:

This may be coincidence, but I doubt it.

Bassem Tamimi is about to leave for his 2015 U.S. Speaking Tour, sponsored by several anti-Israel organizations including Jewish Voice for Peace, the Chicago branch of Amnesty International, Interfaith Peace Builders (which sends activists to visit with the Tamimi family), and Sabeel – North America.

Indeed, Sabeel organizer Ariel Gold from Ithaca, who met the Tamimi family during a trip at the end of last year, is coordinating the tour: 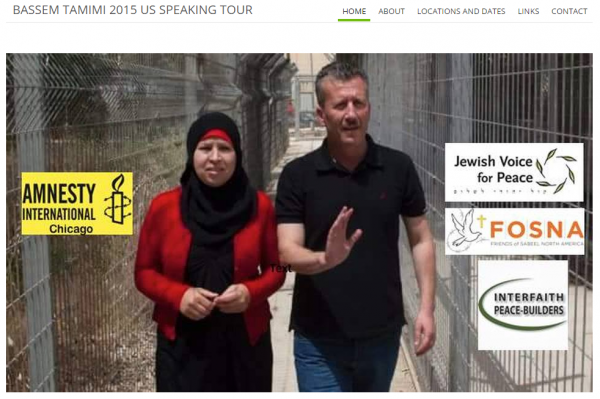 As recently as a week ago Gold was still trying to drum up additional speaking locations  and attendence for Tamimi. Those locations and larger audiences won’t be hard to find now.

So, knowing now what you know, here is the video that is making the rounds and going viral, produced, of course, by a Tamimi — in this case Bilal Tamimi.

[added] Note that the video does not show what precipitated the confrontation. This is very typical of the Palestinian activist film productions. If you punched me, but the video only showed me punching you back, it would present a completely misleading version of the events.

[Note 9-1-2015 — Apparently the original video was taken down by YouTube. You can see a version of it here.]

Here is the version posted by Bassem on Facebook:

Palestinian Boy Held in HeadlockThis boy was held in a headlock by an Israeli soldier during protests against illegal settlements.

So was this real or Pallywood? Maybe both. It obviously took place, so it’s not a fraudulent video. But it also may be the case that the stone throwing and use of women and children to confront the soldiers — surrounded of course by cameras and videographers — was deliberate for the hope of a viral moment. And in that regard, it succeeded.

For the Israelis it’s a no win situation. If the soldiers withdraw, they are called cowards chased away by women and children. If they continue with the arrest of a minor throwing stones, they are accused of child abuse. If they don’t even attempt to stop the stone throwing, they endanger lives.

If you want to put it in context, what would police anywhere in the world do if a minor teenager threw stones at them? Certainly they would detain the person.

Israel apparently is not backing down, and plans to arrest all those involved.

So maybe the Speaking Tour won’t take place after all.

Be sure to get your tetanus shots when confronting friends of Palestine.

This “movement of lies” has a long history of fakes!

That’s horrible “photo-shopping!” What did the do? Let their dogs photo-shop it?

I saw the original Daily Mail article earlier and immediately thought of Pallywood, thanks to you and your blog.

Glad the Daily Mail is willing to update and question what was obviously intended to incite and churn up hate, anger, and more.

It’s just horrible, what these propagandists do to Israel, taking their hate message to the US – and people believing it.

Wrong. On so many levels.

He who is without sin among you, let him first cast his son, in an arm cast, at them.