Reader Poll: The Donald versus The Megyn

Reader Poll: The Donald versus The Megyn

Who will emerge victorious? 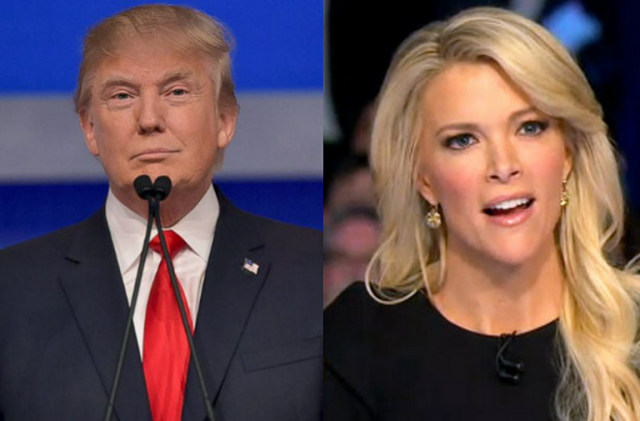 PUT ASIDE THE MERITS of The Donald versus The Megyn fight.

This poll has nothing to do with who is right and who is wrong.

The sole question is WHO IS HURT THE MOST by the fight?

Trump is a single-issue mock-conservative, who appeals to the Nativist wing of the American electorate, which comes to the forefront during economic slump. Trump’s in-your-face attitude also appeals to the chunk of the GOP grassroots which is rightfully sick and tired of RINO candidates and political correctness.

There’s no convincing the Nativists otherwise, because Trump owns their number one issue. It isn’t always a pretty issue, sometimes bordering on racism — or (even less often) crossing that line. But Nativism is a natural response to this lousy economy and President Obama’s shocking (“Shocked, shocked!”) use of racial and religious division.

But GOP voters getting sucked into the Trump Vortex have got to educate themselves and wake up to the fact that Trump is simply not a conservative.
—Steve Green, VodkaPundit

The same website that some folks here have been directing people to, to provide evidence that Carly Fiorina has less-than-stellar conservative cred, is just as damning of Donald Trump.

When it comes to basic issues like civil liberties, support for the free market, health care & entitlements, the second amendment, and taxes, economy & trade… Trump flunks them all.

I’m going through some of the links the site provides to positions Carly has had in the past, and am willing to keep an open mind as to whether she’s provided enough evidence that she has “evolved” past some of her more liberal tendencies. My primary vote is still up for grabs at this point, as I’m still learning more about each candidate. I’m not wedded to anyone yet.

I think Trump fans should take the time to study up on him a bit more as well, before committing themselves so whole-heartedly as some of them seem to have done.

Oh stop with that. There is no “nativist” wing of the party. There ARE people who are sick and tired of the promises made by the Republican establishment that are never kept. People have finally woken up to the fact that these people are just power hungry liars. Trump has great appeal to those people. He’s loud, brash, he gives as good as he gets and he doesn’t give a damn about the money that flows into each candidate.

People like that. All the other types sound like they are reading from scripts that the professional power brokers wrote. It is so important to this voting bloc (believe me, it is actually huge) that they are willing to compromise on other issues to get that kind of person. Look what happened to Rick Perry. He tried to wade into the Trump phenomenon without understanding it and he destroyed his candidacy. It will happen to Rand Paul and it looks like Fiorina got sucked into it and took the bait as well.

The point is to understand what is fueling this discontent and tap into it. Criticizing Trump means you don’t comprehend what the voters are saying. This is much bigger than being conservative or being establishment. This is all about defeating the Republican power brokers. The voters are mad as hell and they can’t take it any more.

The FNC panel missed that completely and used their forum to make themselves part of the story which is very unprofessional and clearly agenda driven. There were much better ways to handle those questions than the bush league way they handled it.

“People have finally woken up to the fact that these people are just power hungry liars.”

Wait. I thought you were pro-Trump. One of us is really confused.

Must be you Rags. The context was clear. I am a big Ted Cruz supporter. I like Scott Walker. Trump has to show more that just his 3 themes. But I understand why people like him. The discontent within the party is palpable now and Trump gets that. Plus there are tons of Dems who would vote for Trump. The guy is a force right now.

I agree with his content, except “nativist” is often used as derogatory for “patriotic” or for “close the borders” or for “America is exceptional”.

Protecting our sovereignty and getting back to the constitution may be “nativist”, but in a good patriotic way. It is rather the opposite of the diversity religion.

But indeed the Trump folks need to be sure their protest candidate is not just more of the same, or worse. He attacks Republicans and he is on the other side of Hillary crony capitalist deals. Part of the art of his deals is to buy political influence.

Well. Read Morrissey’s fisking of THAT.

“We have to take care of women”.

And he’s, again, all over the map on this one issue, like essentially every issue.

Good for Cap’n Ed! Attack Trump on real issues, not phony “War on Women” BS from out of context microaggressive scandal mongering being peddled by Clinton, Jeb’s minions at Fox, and the RNC.

Cool. Here’s your big chance to put it IN context.

Or we’ll see you are lying.

Team Clinton/Kelly won’t like it but the petition to
prevent Megyn Kelly from pretending to “Moderate” another
Republican Debate is now nearing 50,000 signatures!

Drop by and sign up; it’s free to let them know we WILL fight back 🙂

Wonder how many debate moderators the Donald is going to trash before he finds someone who lets him blather on and on? For a man who wants the most powerful job in the world Trump is pretty weak and quick to take offense.

Don’t know how anyone expected that a group of 10 people would actually debate – common sense would indicate that it could be little more than a Q&A. Why wouldn’t you want the candidates to be able to answer the things the Dems are going to surface? Shouldn’t Trump have been prepared to answer for his past behaviors? Or is it all forgiven because the GOP establishment hates him?

You all do understand that we’re not electing a President this year?

So it really doesn’t matter much what goes on for another couple months.

Lots of time for the dead wood to be cleared out and for the GOPe to maybe get the message that people are tired of their sh!t and might just be angry enough to go to the polls and express that anger.

I don’t what I’m going to do next year. A lot depends on the reaction of the candidates to Trump’s popularity (and so far it’s not looking good. Out of all of them, Cruz seems to understand), how they shift positions or how they express themselves.

A lot has to do with how much crap the GOPe throws into the mix and whether they understand they face extinction next year or at least a major loss.

Until then, lean back, have a drink or two and watch the show. And lighten up folks. Don’t mean nothing.