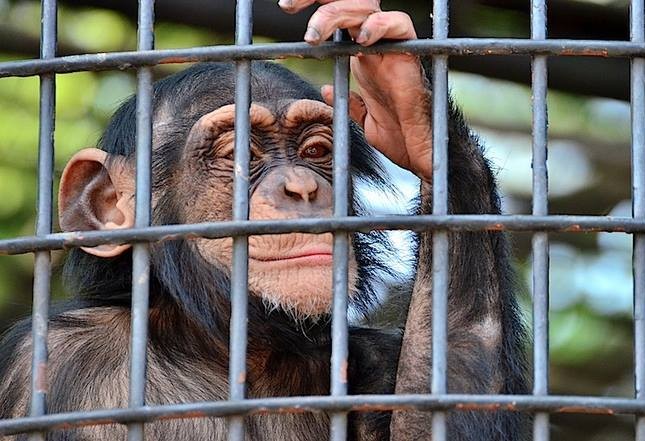 A New York State Judge recently denied an attempt by a group acting for Tommy the Chimp to obtain habeas corpus relief. (Full embed at bottom of post.)

But in so denying relief, the judge predicted possible future change citing the U.S. Supreme Court’s decision in the same-sex marriage case. #Seriously.

Now we have covered the slippery slope as much as anyone in the area of polygamy and polyamorous clusters, including in light of the recent Supreme Court ruling on same-sex marriage:

Don’t worry, it’s not as bad as the tweet makes it sound, depending on what the definition of “bad” is:

On Wednesday, New York Supreme Court Judge Barbara Jaffe rejected a claim that two chimpanzees in a New York research laboratory have a right to bodily liberty. The Nonhuman Rights Project had filed a petition for the two chimps, Hercules and Leo, for a writ of habeas corpus freeing them from unlawful imprisonment. In denying the petition, Jaffe could have laughed off the NRP’s claims. Instead, she wrote a surprisingly thoughtful opinion that gives both liberty and morality a fair shake.

To its credit, the NRP has not argued that chimps and other great apes have a constitutional right to habeas corpus

Jaffe takes this claim seriously despite its novelty. No offense intended, I assume, but she does so by repeatedly citing the Supreme Court’s decisions broadening the rights of liberty for gay Americans. “If rights were defined by who exercised them in the past,” she notes, quoting Obergefell v. Hodges, “then received practices could serve as their own continued justification and new groups could not invoke rights once denied….

Still, Jaffe writes, questions about chimps’ right to autonomy should be answered by a higher court or the legislature—not a supreme court judge. (In New York, supreme courts are low-level trial courts.) While quoting another gay rights ruling,Lawrence v. Texas’ admonishment that “times can blind us to certain truths,” Jaffe throws out the petition for Hercules and Leo’s release. “Efforts to extend legal rights to chimpanzees are understandable,” she writes. “Someday they may even succeed.””

No, the citation to the Supreme Court same-sex marriage case is in there, not to justify the ruling, but to point out that the chimps should keep hope alive of some future form of “personhood”: 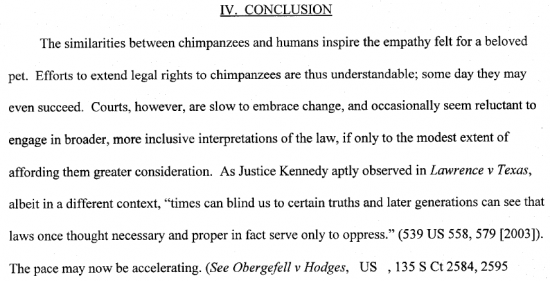 Professor, it’s kind of hard to comment on an article where so much of the text is unreadable due to formatting; the last 3 paragraphs of the block quote are all cut off on the right hand side.

Too many words are lost because the text appears to be under the long column at the right side of the page.

I do love this site, but I wish you’d fix this problem, which has been around for a while but is particularly egregious in this article.

(I’m only complaining because I don’t want to miss a single word of your wisdom!) 😀

Thanks, Eskyman, we’re looking into it now. 🙂

Marriage equality is to be considered equal with chimp rights? Perhaps the judge’s words are a Pavlovian response to Cecil’s media coverage.

Now that marriage has been debased into the lowest common denominator of marriage ‘equality’ the judge’s response seems perfectly in line with atheism, Epicurean philosophy and the wedding of the unnatural with the perverse…to make all the animals happy.

My son just asked his motorcycle to marry him. (I am NOT Branca’s father IRL).